Unions demand that the CEOE return to the salary negotiating table: ‘If there is no agreement, the conflict will increase’ 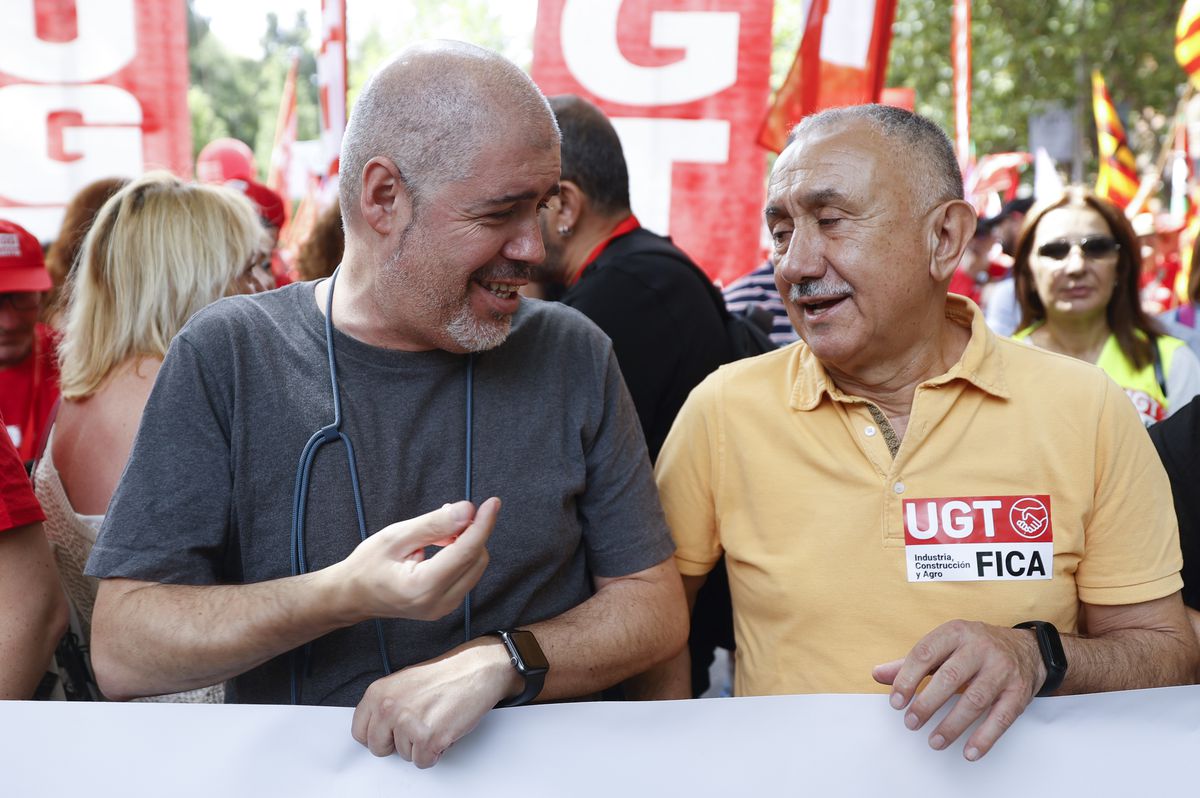 Negotiations between unions and employers are stuck. Following this week’s farewell to the President of the CEOE, Antonio Garamendi, and the Secretary Generals of UGT, Pepe Álvarez, and CC OO, Unai Sordo, for the seminar organized by the Association of Economic Information Journalists (APIE) at the University Internacional Menéndez Pelayo (UIMP) has made it clear that agreement on salary reassessments is further than ever. The bone of contention is the wage guarantee clause, a key factor for unions and a mistake for employers because they believe high inflation will become chronic.

“It would be prudent for us to sit down with employers to reach an agreement on wages. If there is no agreement, the conflict will grow. There is no way we could sign the agreements down. The conflict is served if we cannot find this framework in the short term,” assured Álvarez this Tuesday in Santander. Sordo, for his part, echoed those words and separated these talks from the political cycle. “The wage pact is an autonomous dynamic of political development that can lead the country. the last elections [las autonómicas de Castilla y León y de Andalucía] they do not mark whether there is a political change or not. What has happened is a reconfiguration of the centre-right and amplifying the understanding of politics within the PP against the extreme right that Vox symbolizes,” he replied to journalists’ questions.

Despite the fact that it seems obvious that the political context is influencing the social agents’ negotiations, Álvarez and Sordo maintain that the talks roadmap must remain intact even as the government begins to move pieces – this Saturday it has a council convened Ministers give extraordinary endorsement to anti-crisis measures following Andalusia fiasco – and PP feels empowered. “[Las negociaciones] they have to act according to their own criteria, and that cannot be the political situation. If not, it’s very difficult to reach agreements,” Álvarez said. Another factor must be added to this cocktail: the employers’ association faces internal elections next autumn, another possible brake on any transfer.

As workers’ representatives in Santander explained, the unions’ proposal was a pay increase of 3.5% this year, 2.5% in 2023 and 2% in 2024, with a pay review at the end of each exercise to ensure that these costs are passed on to avoid (although it would be done over the course of the following year). A proposal that, as Garamendi assured in the same room a day earlier, the companies were willing to accept if the wage guarantee clause were removed from the equation. This compensates at the end of the year when the CPI has risen higher and offsets it so there is no loss of purchasing power.

“We have not suggested wages rise 9% today or underlying inflation. We have made a proposal for wage increases this year and next and that there will be wage review clauses that will not cause second-round inflation,” Sordo said. A dead end as the President of the Employers’ Confederation is totally closed to the possibility, believing it would lead to structural increases that should be cumbersome.

In this context, autumn is hotter than ever. Unions are ready to push as hard as they can and the protests won’t stop. At the moment, the metal strike has actually been demanding an increase in wages for days. According to Álvarez and Sordo, it will be one of many to be added. Also, inflation does not appear to be a truce and will fuel the conflict even more. “Wage earners cannot be the only payers of this situation,” added the CC OO chairman.

The employee representatives have also spoken out in favor of a possible corporation tax surcharge for electricity companies. “If that rate is 10 percentage points, that seems fine to me. It will not be an abusive course, quite the contrary, I think it will fall short. We’re not talking about legitimate benefits, we’re talking about usury. The electricity companies are robbing the citizens,” stressed the Secretary General of the UGT.

Next-gen Nvidia: the first hardware information on the RTX 4070 and 4080 has appeared