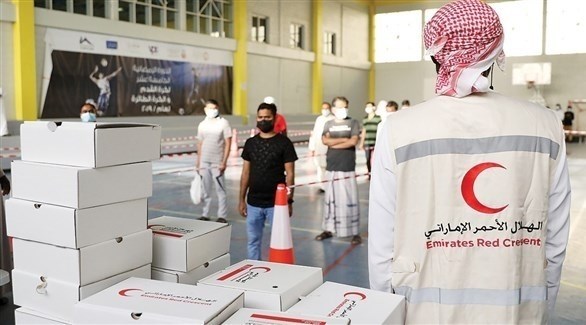 Under the directives of the Ruler’s Representative in Al Dhafra Region and Chairman of the Emirates Red Crescent Authority, Sheikh Hamdan bin Zayed Al Nahyan, the authority has strengthened its Ramadan programs this year to reduce the repercussions of the humanitarian situation prevailing in many countries. .

And 2,113.33 billion people benefit from the programs within the UAE and in 64 countries around the world, including iftar for the fasting person, zakat al-fitr, Eid clothing, Ramadan food and fast breaking , with an initial cost of 36,803,430 dirhams.

continually give
The Red Crescent Authority launched its Ramadan season campaign under the banner “Ramadan .. Continuous Giving” during its press conference today at the Emirates Pavilion at Expo 2020 Dubai, to provide support and assistance to the categories and segments to which the authority is directed inside and outside the country, and disclosed the details of the campaign that arrives this year more comprehensive in line with the quantitative and qualitative expansion that its humanitarian programs and solidarity projects have experienced.

The Secretary General of the Red Crescent Authority, Dr. Muhammad Ateeq Al-Falahi, highlighted that the authority’s programs and activities inside and outside the country are experiencing steady growth, thanks to the directives of the wise state leadership.

He added: “This is evident from the scale of the Ramadan campaign, which we are about to launch today, with the aim of supporting the donors and philanthropists who are our support in alleviating suffering, improving lives and preserving human dignity. , and they are also our help in the fight against poverty, hunger and disease, and in strengthening the infrastructure of basic services in many countries.”

Al-Falahi said, “The Ramadan campaign activities for this year are aimed at strengthening communication bridges with the country’s charitable society and enhancing areas of partnership with all its sectors to support the efforts of our National Authority in the country and abroad, and achieve its aspirations of expanding the umbrella of beneficiaries of its services, and pioneering broader areas of work and providing greater attention to segments, and leading them to a more effective way of improving life and reduce the burden of suffering.

For his part, the Deputy Secretary-General for Marketing and Resource Development of the Red Crescent, Hamoud Abdullah Al-Junaibi, said during the press conference: “As we prepare to receive the best months, we seek to enhance the spirit of human solidarity . providing the opportunity to participate in our programs that extend inside and outside the country, where hundreds of thousands benefit. Oil company “ADNOC”, First Abu Dhabi Bank, Abu Dhabi Islamic Bank, Dubai Islamic Bank, Etisalat, Carrefour, Dolphin Energy, Al Masaood Group, Abu Dhabi Media and the cooperative Abu Dhabi Association.

For his part, the Deputy Secretary General of the Red Crescent Local Aid Sector, Salem Al-Rais Al-Amiri, said that “1,450,438 million people in the country are benefiting from Ramadan programs this year,
amounting to 21,303.430 million dirhams”, and that 1,151,600 million people benefit from the fasting breakfast program during the month in the country at 11,516,600 dirhams, while 44,928 thousand benefit from the Ramadan meal , which covers the main food needs of needy families and people in need at 4,241,230 million dirhams, in addition to 51,810 thousand who benefit from zakat al-Fitr at 4,315 million dirhams, in addition to 2,100 orphans who benefit from Eid clothing at 630 thousand dirhams.

It should be noted that the Red Crescent Authority has set aside around 250 donation collection sites throughout the country’s emirates, especially in shopping malls, popular markets and densely populated areas, in addition to a number of other in-kind donation collection sites. . , in addition to donating through its centers, website, smartphone app, bank deposits and messaging, text, toll-free phone, cash donation boxes, and electronic devices.

A specialized Red Crescent team will also contact official and semi-official bodies and agencies, private sector institutions and visit major benefactors, to invite them to participate in the campaign activities, which include many activities to present their nature and goals.