Ukrainian President: Talks with Russia are difficult and sometimes contentious 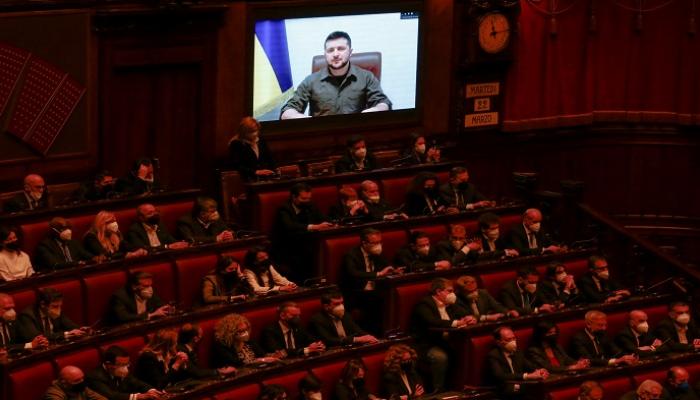 Ukrainian President Volodymyr Zelensky revealed developments in talks with Russia to end the war, noting that they are difficult and sometimes contentious.

“Step by step we are moving forward,” he said during a video address early Wednesday.

He added that 100,000 people live in the besieged city of Mariupol in inhuman conditions, without food, water or medicine, noting that “there is nothing left.”

The port city of Mariupol is suffering from Russian attacks and fierce street fighting, a day after the city rejected Moscow’s demand to declare its surrender.

The city council said the shelling had reduced Mariupol to “ashes”.

The RIA news agency quoted a separatist leader as saying that Russian forces and Russian-backed separatist units had taken almost half of the city.

Donetsk region governor Pavlo Kirilenko said there were street clashes and Ukrainian civilians and troops were under Russian fire.

On day 27 of the war in Ukraine, the plight of civilians worsened in Mariupol, which had a population of 400,000, with hundreds of thousands believed to be trapped inside buildings without food, water, electricity or heat.

The city’s deputy mayor, Sergey Orlov, told CNN that the city was completely under siege and had not received any humanitarian aid.

“The city is under continuous bombardment. Russian planes drop 50 to 100 bombs a day, many people have been killed,” he added.

Mariupol became the focus of the war that broke out on February 24 when Russian President Vladimir Putin sent his forces across the border in what he called a “special military operation” to disarm Ukraine and isolate its pro-western leaders.

Mariupol dominates the Sea of ​​Azov and its capture would allow Russia to unite areas controlled by its separatists in the east with Crimea, which Moscow annexed in 2014.

The United Nations Human Rights Office in Geneva said on Tuesday it had recorded 953 civilian deaths and 1,557 injuries since the start of the invasion. The Kremlin denies targeting civilians.