Ukrainian Ambassador calls for an “Airlift 2.0” from Berlin 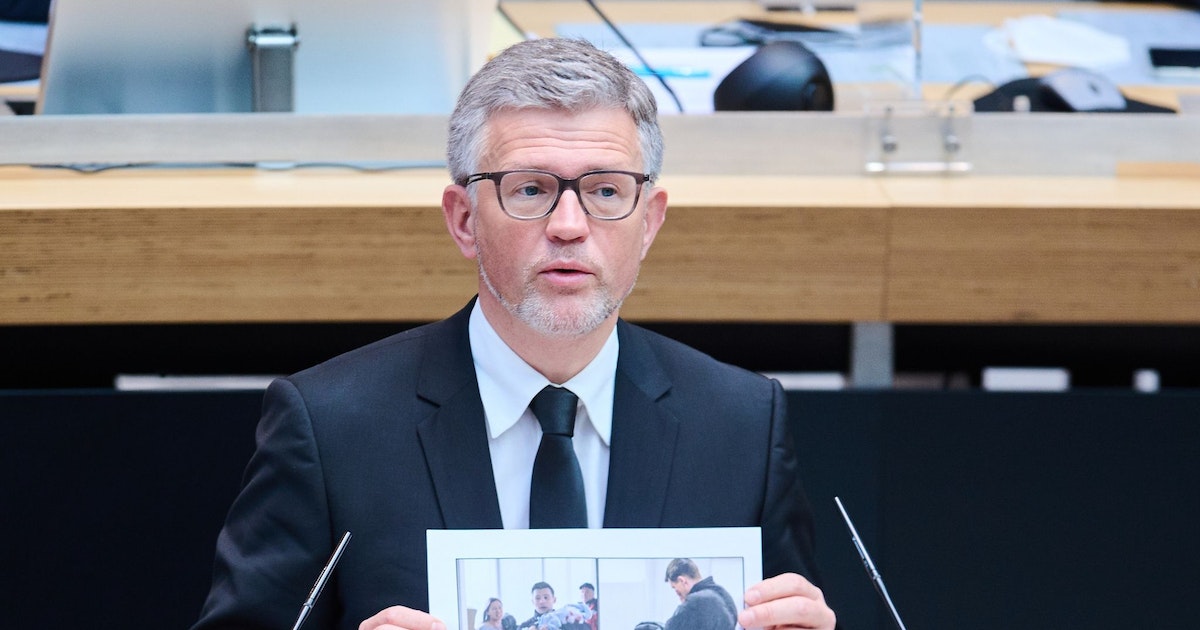 Sedan – Andriy Melnyk talks about the children even before he greets the Berlin politicians, the speaker of the parliament, the members of parliament, as the speakers here often do. By Kirill, Alisa, Sofijka. Nothing is normal anymore.

Not for the Ukrainian ambassador, who has been trying for weeks to draw attention first to the threat to his country from Russia and, since the beginning of the Russian attack, to Ukraine’s suffering and resistance. Who had to listen for weeks to calm down and, from the beginning of the attack, above all: speeches of solidarity. On the talk shows he sits on, in the Bundestag, where he watched from the visitors’ gallery as German politicians heralded a “turning point in time.”

On Thursday he is in the House of Representatives in Berlin, this time not as a spectator, but as a speaker. He was the first guest ambassador since reunification. Melnyk has photos of the children with him, he holds them in the air on the lectern. Kirill, a boy from Mariupol, was 18 months old when Russian rockets severely wounded him and he died in hospital in the southeastern Ukrainian city, which had been besieged, shelled and starved for days. Alisa from Ochtyrka was eight years old, her grandfather tried to protect her from the shooting of Russian soldiers and she died with him. Sofijka was six years old. She can read the children’s stories, which Olena Zelenska, the wife of President Volodymyr Zelenskyy, shared on the Internet.

Andriy Melnyk commemorates children. Then he turns to politics, he has prepared well for her performance, he not only wants the sympathy of Berlin, this “beautiful city”, as he keeps calling it. He has political demands on him, tailored to this place. Claims on the city of Berlin. Things that could be addressed immediately if Melnyk has his way, he zeroes in on a comprehensive list.

Ukraine is an independent cultural nation, says Melnyk, and demands recognition for it. He recalls that more than eight million Ukrainians died in World War II after the German invasion of the Soviet Union, that two and a half million Ukrainians were exploited as forced laborers in Germany. There are monuments to Soviet soldiers in Berlin. Melnyk calls for a monument to the Ukrainian victims of World War II in Berlin in the House of Representatives. He also wants new European, German-Ukrainian schools, he wants the city to open its stages to artists from Ukraine.

Andriy Melnyk: “We also fight for your freedom”

It demands that businessmen in Berlin no longer do business with Russia. And an airlift for your country, fast. What he does not demand are more solidarity speeches. In an interview with the Welt newspaper on Wednesday, he said he had the feeling in the Bundestag that the Germans were celebrating with standing ovations. But Ukraine hardly feels help, nothing comes that does justice to the degree of desperation of his country.

“We must not be left in the lurch,” says Andriy Melnyk in the House of Representatives. “We’re here, we’re fighting. We’re also fighting for your freedom.” Then he walks out of the lectern, takes a seat behind the senators, third row, outside, alone.

It is the turn of the Berlin politicians. You could answer him, say: We listen to you. O: Let’s discuss the demands. But they too have prepared speeches and now they are holding them as planned, that’s how it works. Raed Saleh, the leader of the SPD parliamentary group, speaks with emotion about the willingness of Berliners to help. Kai Wegner of the CDU says that “all Berliners love freedom” and that everything will be done to ensure that Ukrainians have freedom again, “Dear Mr. Melnyk.”

Furthermore, Wegner attacks Social Affairs Senator Katja Kipping of the Left Party, who underestimated the extent of the mass exodus and Berlin was unprepared. She gets loud in plenary, the next speaker, Silke Gebel of the Greens, starts with the warning not to use the crisis to “profile political parties”.

One wonders how Andriy Melnyk looks at this room, at Gebel, who now speaks of his own fears, of his own children. She turns to him and says that she is grateful for “the courage and the warnings”, briefly mentions the idea of ​​bilingual schools, ends with the goal of making Berlin climate neutral, after all, party politics it works. Andriy Melnyk wears a mask, you can’t see his facial expression. He sometimes claps briefly.

He is followed by other speakers, Kirsten Brinker from AfD, Carsten Schatz from left, Sebastian Czaja from FDP. In every speech, in every party, there is the right warning not to discriminate against Russians and people who speak Russian. In each case, the right thanks go to the volunteers who help at the main train station and other places in the city to deal with the influx of war refugees.

Sebastian Czaja of the FDP wears a blue and yellow solidarity ribbon, recounts a train trip with women who had escaped the bombed Kharkiv, says goodbye with “Slava Ukrainii”, glory of Ukraine. He also seems very moved, more moved than Melnyk himself, he doesn’t respond to the ambassador’s demands either, not a single one.

Franziska Giffey: “Not an air bridge, but a railway bridge”

For almost an hour and a half you can see the politicians of Berlin talking to Andriy Melnyk and at the same time walking past him. One after the other.

That leaves Franziska Giffey, the SPD’s second speaker. The mayor of the Government has come a particularly long way this Thursday. When she defends herself against accusations that she herself underestimated the task because she initially spoke of 20,000 refugees, to whom Berlin must first accommodate, she is the full head of the state government. “We were able to estimate the number of people,” she said, “but we still don’t know how many there will be at the end.” How awful the situation was going to get.”

Giffey is asking the federal government, including the Bundeswehr, for help. Marie-Agnes Strack-Zimmermann of the FDP already said in the morning what the federal government thinks about it. The chairman of the Bundestag Defense Committee tweeted: “No, @FranziskaGiffey. This has to end at last. the #Armed forces it is not an extended aid organization. Right now we need the Bundeswehr for its main tasks. Not only Berlin has to get out of comfort. For something like that there is, among other things, civil protection.” Comfort? it’s fine.

What does the lone man in the third row of the Senate benches think about these skirmishes inside Germany? The man who claims to cry every day for misery and death in his homeland? What do you say to someone like that? How can the worlds connect, yours and that of Berlin’s state politics?

No, @FranziskaGiffey. This has to end at last. the #Armed forces it is not an extended aid organization. Right now we need the Bundeswehr for its main tasks. Not only Berlin has to get out of comfort. For something there is, among other things, civil protection. pic.twitter.com/PLzOR1cQV6

At the end of her speech, Franziska Giffey makes an attempt. She talks directly with Andriy Melnyk, enters his to-do list and demands of him. One after the other. She promises to campaign for Ukraine’s recognition as a cultural nation. She wants to talk about the idea of ​​the memorial and also about a European school. There will be no air bridge, “but a rail bridge,” she says.

When he has marked tasks, Giffey also dares to get excited. She talks about two Ukrainian women she met these days, “two special women.” Naturally. At the main station, one told him: “We pray every day for the next morning.” The other, an organizer of a Ukrainian film club in Berlin, said: “I wish you a peaceful sky.” her voice breaks. She struggles with herself and with her emotions. Quickly put on the corona mask and go to the seat. When she gets there and takes off her mask, the area around her eyes is red.

Shortly after, the start of the two-hour war is over for the parliamentarians in Berlin. Andriy Melnyk thanks him and leaves. ventilation break.