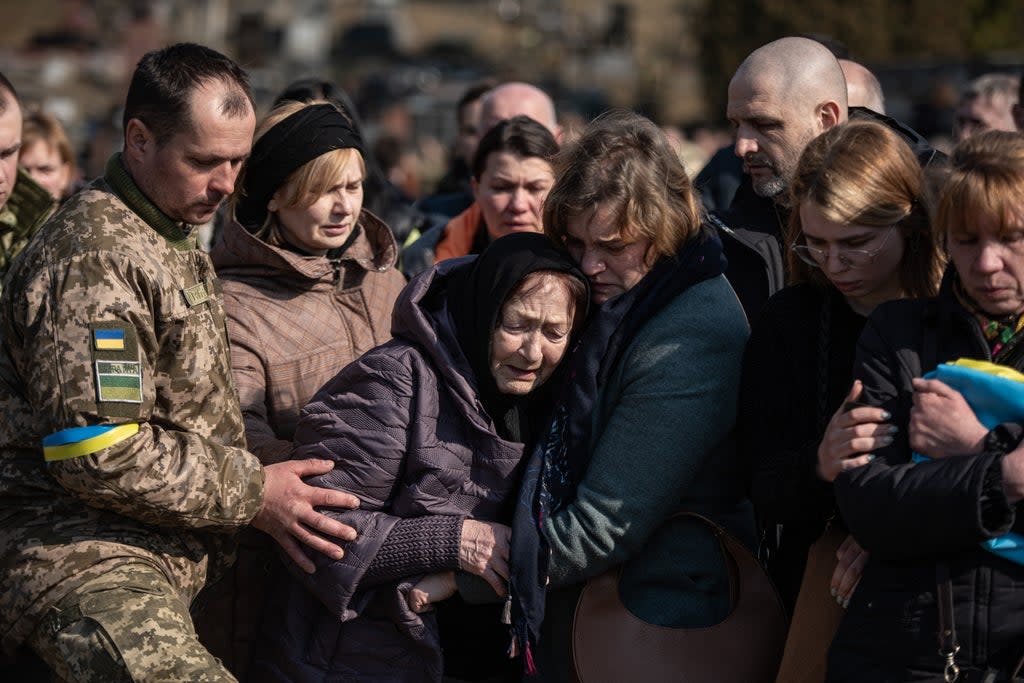 Ukraine has said it sees possible room for compromise in talks with Russia as air-raid sirens sounded in Ukrainian cities on Wednesday morning.

The rapid developments on the diplomatic front came as Russia’s invasion neared the three-week mark and the number of Ukrainians who fled the country amid Europe’s heaviest fighting since World War II eclipsed three million. .

“Efforts are still needed, patience is needed,” he said in his late-night video address to the nation. “Any era ends with a deal.”

Zelensky, who is expected to address the US Congress on Wednesday, thanked President Joe Biden and “all the friends of Ukraine” for $13.6bn (£10.4bn) in new support.

He called for more weapons and more sanctions to punish Russia, and repeated his call to “close the skies over Ukraine to Russian missiles and aircraft.”

He said Russian forces on Tuesday had been unable to advance deeper into Ukrainian territory, but had continued their heavy shelling of cities.

Over the last day, 28,893 civilians were able to flee the fighting through nine humanitarian corridors, although the Russians refused to allow aid into Mariupol, he said.

Mykhailo Podolyak, an adviser to Zelensky and a member of the Ukrainian delegation, described the negotiations as “very difficult and viscous.”

In a Twitter post after Tuesday’s talks, Podolyak said there were “fundamental contradictions” between the two sides, but said “there is certainly room for compromise.”

In other developments on Wednesday, air raid sirens sounded at dawn in Ukrainian cities including kyiv, Lviv and Odessa.

A plume of smoke was seen rising over western kyiv after shrapnel from an artillery shell slammed into a 12-story apartment building, destroying the top floor and starting a fire, according to a statement and pictures released. by the kyiv emergency agency.

Russian forces have intensified fighting in the suburbs of kyiv, particularly around the city of Bucha in the northwest and the road leading west to Zhytomyr, the head of the kyiv region, Oleksiy Kuleba, said.

He said Russian troops are trying to cut off the capital from transportation arteries and destroy logistics capabilities even as they plan a wide-ranging attack to seize kyiv.

Twelve villages around kyiv are without water and six without heating.

Russia has occupied the city of Ivankiv, 50 miles north of kyiv, and controls the surrounding region on the border with Belarus, Kuleba said.

It came after the capital entered a 35-hour curfew after heavy shelling killed several people on Tuesday.

Russia’s shelling of kyiv appeared to be closing in on the city center, hitting civilian sites including apartments and a metro station.

The leaders of three European Union countries – Poland, the Czech Republic and Slovenia – visited the beleaguered capital on Tuesday, arriving by train in a bold show of support amid danger.

In its latest military intelligence update on Tuesday night, the UK Defense Ministry said Russia was looking to bolster and replace troop losses in Ukraine.

“As a result of these losses, Russia is likely struggling to conduct offensive operations in the face of sustained resistance from Ukraine,” he said.

A senior US defense official, speaking on condition of anonymity to discuss the Pentagon assessment, said the Russians were using long-range fire to hit civilian targets inside kyiv with increasing frequency, but that his ground forces were making little to no progress around the area. country. The official said Russian troops were still about nine miles from the center of the capital.

The official said the United States has seen signs that Russia believes it may need more troops or supplies than it has available in Ukraine, and is considering ways to get more resources into the country. The official did not provide further details.

Before Tuesday’s talks, Russian Foreign Minister Sergey Lavrov said Moscow would press on with its demands that Ukraine abandon its bid to join NATO, adopt a neutral status and “demilitarize”.

In a statement that seemed to indicate possible reasons for a deal with Moscow, Zelensky told European leaders gathered in London that he realized that NATO has no intention of accepting Ukraine.

“We have heard for many years about open doors, but we also heard that we cannot enter those doors,” he said. “This is the truth, and we just have to accept it as it is.”

NATO does not admit nations with unresolved territorial conflicts. Zelensky has said repeatedly in recent weeks that he realizes NATO will not offer Ukraine membership and might consider neutral status for his country, but needs strong security guarantees from both the West and Russia.

The UN said nearly 700 civilians have been confirmed dead in Ukraine, and the real number is likely to be much higher.

Two journalists working for Fox News were killed when the vehicle they were traveling in caught fire on Monday outside kyiv, the network said. Fox identified the two as video journalist Pierre Zakrzewski and Ukrainian journalist Oleksandra “Sasha” Kuvshynova, who was helping Fox crews navigate the area. Another journalist was killed on Sunday in Ukraine.

New efforts were under way to bring civilians to safety and deliver aid across the country. The Red Cross said it was working to evacuate people on some 70 buses from the northeastern city of Sumy, near the Russian border.

In Mariupol, the mayor said Russian troops were holding 400 doctors and patients hostage.

The exodus from Mariupol marked the largest evacuation yet from the southern city of 430,000, where authorities say a weeks-long siege has killed more than 2,300 people and left residents struggling for food, water, heating and medicine. The bodies have been buried in mass graves.

Kyrylo Tymoshenko, Zelensky’s senior adviser, said some 20,000 people managed to leave Mariupol on Tuesday in 4,000 private vehicles through a designated safe corridor leading to the city of Zaporizhzhia.

Ukraine later said that a fourth Russian general had been killed in the fighting.

Major General Oleg Mityaev was killed during the assault on Mariupol on Tuesday, Ukrainian Interior Ministry adviser Anton Gerashchenko said, posting a photo on Telegram of what he said was the dead officer.

- Advertisement -
Share
Facebook
Twitter
Pinterest
WhatsApp
Previous articleBundestag debates bill: doctors and patient advocates criticize planned abolition of corona measures – politics
Next articleAl-Ittihad is angry, but he is a candidate to take a new step towards the Saudi League title