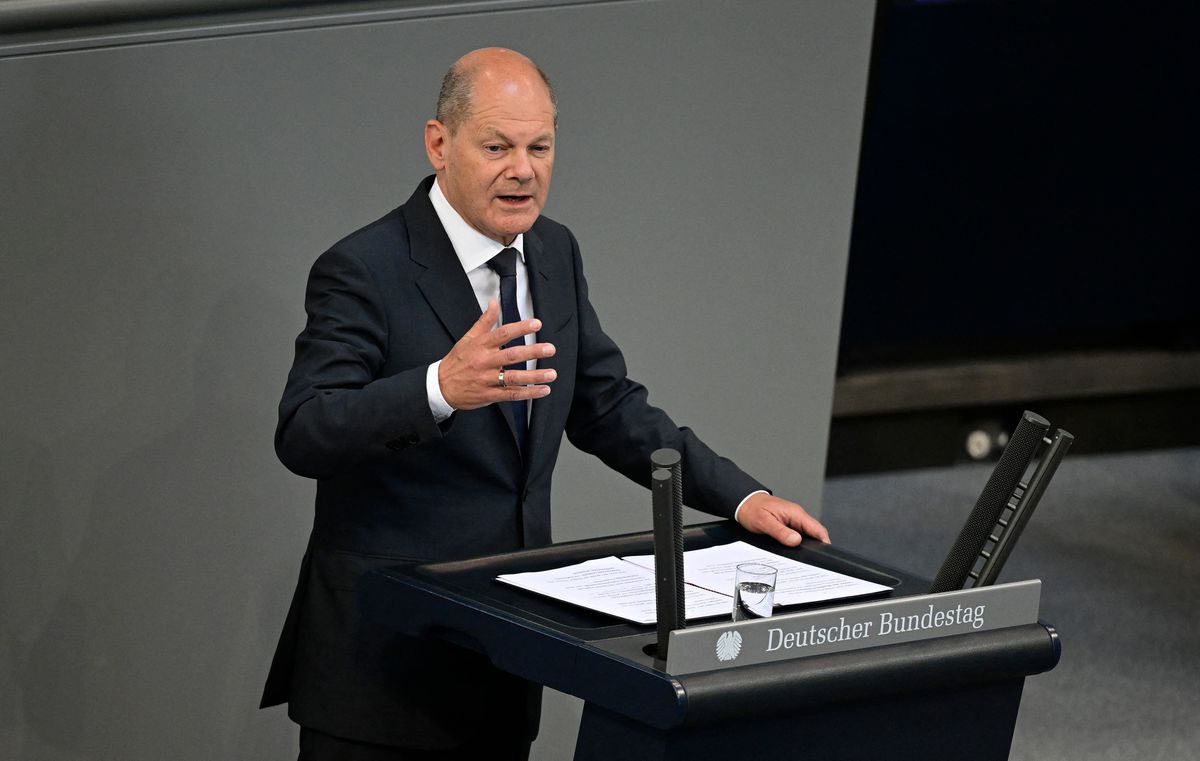 The heavy weapons that Germany has promised to Ukraine and has drawn so much criticism from Foreign Ministers Olaf Scholz for their late delivery are finally reaching the combat zone. Berlin has already sent 12 Panzerhaubitz 2000, one of the most modern and powerful conventional artillery systems in the world, to Ukrainian territory after weeks of training soldiers of the Kiev army in it. And Scholz says he is ready to support Ukraine “massively” with arms and financially for as long as necessary.

The Chancellor appeared in the Bundestag this Wednesday to speak about the three crucial international summits that will take place in the coming days: the European Council in Brussels, the G-7 meeting in Germany and the NATO meeting in Madrid. Scholz, who has been in office for just over six months, has barely had time to find his role as a leader in world politics. The series of high-level meetings will put him in the international limelight, especially since his previous foreign policy actions have drawn some skepticism, from his slowness in shutting down the Nord Stream 2 gas pipeline to his long-delayed visit to Kyiv and hesitation in supplying arms to Ukraine .

The war of aggression initiated by the Kremlin will shape the three appointments, as the Chancellor stressed in front of the German Chamber; However, the leader has other priorities under his arm, such as the climate emergency. Scholz has suggested using the presidency of the Group of Seven industrialized countries to push forward criteria to tackle fossil fuel dependency and set up a “climate club” for which he will try to find a place at the negotiations at Schloss Elmau in the Bavarian Alps , next week.

reforms in the EU

The foreign minister stressed that during his visit to Kyiv he had already made clear Germany’s support for Ukraine’s and Moldova’s candidate status, but insisted that the EU must be “open-minded” to reforming its structures and procedures. This Thursday and Friday in Brussels, Berlin will advocate that future decisions, for example in foreign policy, can be made with a qualified majority. Scholz reiterated that after years of waiting for the Union, the countries of the Western Balkans were demanding “clear perspectives”. “The EU must finally give the green light to accession negotiations with Albania and North Macedonia,” he said.

The invasion of Ukraine has brought about a radical change in German defense policy, which is preparing for rearmament with an investment of 100 billion euros in its previously abandoned army. This armament, said Scholz in the Bundestag, not only serves to defend the security of Germany, the largest economy and the most populous country in the EU, but “that of all allies”. NATO partners in Eastern Europe “can trust us,” said the Chancellor.

Berlin is telling the world that it is finally taking over its own protection. “In the biggest security crisis in Europe in recent decades, Germany assumes a special responsibility,” added Scholz, echoing what SPD leader Lars Klingbeil said at a meeting of the Friedrich Ebert Foundation in Berlin on Tuesday: “Germany must claim to be a leading power. After almost 80 years of dispute, Germany now has a new role in the international system.”

A Marshall Plan for Ukraine

From the meeting in Madrid, Scholz hopes the Allies will send a “sign of cohesion and determination” in view of the war of aggression against Ukraine. The chancellor acknowledged the obvious that “a partnership with Putin’s aggressive and imperialist Russia is not imaginable in the near future,” but declared himself in favor of maintaining the NATO-Russia Founding Act. It would be “unwise” to denounce it, he said, even though it affirms principles the Russian president has flagrantly violated. In connection with the dispute between Russia and Lithuania over the Baltic Sea enclave of Kaliningrad, Scholz assured his eastern partners of his full solidarity: “We will defend every square meter of the alliance’s territory,” he said.

According to the Chancellor, it is time to think about the future after the war. “Ukraine needs a Marshall Plan for its reconstruction,” he said, referring to the help the United States provided to pull post-war Europe out of the abyss. He said seeing the destruction in places like Irpin firsthand reminded him of German cities after World War II. Rebuilding Ukraine is “a multi-generational task,” he added, and it will take “many billions of euros and dollars.” But at the same time he noted that there is no progress to end the conflict. Russia and Ukraine are “still a long way from negotiations,” he said, because “Putin still believes in the possibility of being able to dictate the peace.”

Tank howitzers against criticism of Berlin

The 2,000 self-propelled howitzers already in Ukraine mark the first shipment of German heavy weapons to the country since the Russian invasion began nearly four months ago. Ukrainian Defense Minister Okeksii Reznikov thanked the delivery on Twitter her German counterpart Christine Lambrecht. In his speech to the Bundestag, Chancellor Olaf Scholz responded to criticism of his hesitation in shipping war material without naming it. “Germany is doing everything to help Ukraine,” he said.

This model is the most modern artillery system of the Bundeswehr, the German army. The howitzer is mounted on an armored, tank-like chassis that is highly mobile over any terrain. Hit targets at 30 kilometers. Seven of the Panzerhaubitze 2000 left Germany and another five from the Netherlands, with export permits from Berlin.

The German government has come under fire in recent months for first failing to commit to sending heavy weapons and then being slow to deliver them. Berlin has offered various explanations, from the lack of materials in their own arsenals to the difficulties in maneuvering some models, requiring weeks of special training. On Tuesday, in great secrecy, Olaf Scholz’s executive released the list of all war material that had been sent to Ukraine since the offensive began. The delivery of the armored howitzers marks the first delivery of modern weapons currently in use in Western armies, and not from the old Soviet Union arsenals. So far, Berlin has prioritized exchanges with countries of the former Warsaw Pact, so that they send their Soviet tanks to Ukraine and the Bundeswehr supplies them with German tanks in return.