Ukraine mourns the loss of its youngest hero 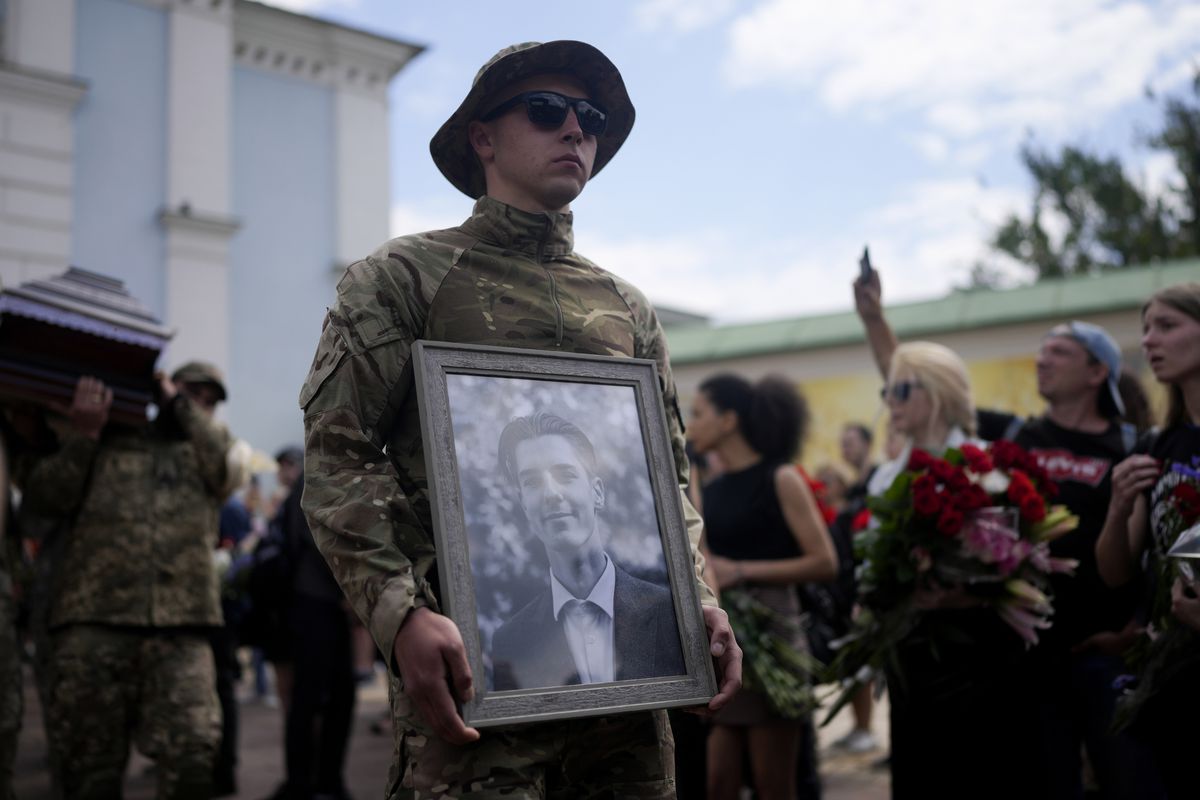 Soldiers who have been through several wars, with trembling voices, couples embracing with eyes lost in infinity, women with flowers in their hands and eyes full of tears, and many, many shouts of glory to Ukraine, glory to the heroes and death to the enemy. Central Kyiv on Saturday saw a gigantic three-act farewell to Roman Ratushni, the 24-year-old who exemplified all the virtues Ukrainians want to be reflected in and who last fell victim to a Russian attack on the Eastern Front on June 9 .

Ratushni’s death is not another. After almost four months of war, the Ukrainians have to get used to the bad news. But the motif that drew the crowds on Saturday – and has been all over social media for the past few days – was something special. Many in attendance spoke of a feeling of disbelief in what was happening.

In his short life, Ratushni had time to do many things. At just 17, he took part in the Maidan revolution that would end with the departure of pro-Russian President Viktor Yanukovych. He later led a social protest against the construction of buildings in a green zone on the outskirts of Kyiv. And later, when Vladimir Putin unleashed all his anger against Ukraine on February 24, he did not hesitate to enlist first to defend the capital and, when it was safe, to go to the east of the country, where he would end his days would. “He was brave and had a great sense of humor. He always brought out the best in everyone,” his mother Svitlana Povaliaeva reminded him.

Ratushni’s charisma gives special meaning to his death. But it’s part of a never-ending stream that no one knows when it’s going to stop. There are no official figures, but statements by various government officials give an idea of ​​how desperate the situation is. President Volodymyr Zelenskyy told the Davos Forum at the end of May that between 50 and 100 Ukrainian soldiers die in Donbass every day. But those numbers seem to have fallen short. In recent weeks, various advisors to the President have increased it to 200 or even 500. In addition, prosecutors estimate that 323 children have died since the Russian invasion began.

The scale of the tragedy has led some analysts to compare it to the tragedy suffered by Ukraine during World War II. But Roman Ponomarenko, a doctor of history and military analyst, wonders if the current death toll is anywhere near what it was 70 years ago. “Given the intensity of the fighting, I estimate that every day now we will have around 100 casualties and 500 wounded. On the Soviet-German front in 1941-1945, the human losses of Ukrainians in the ranks of the Red Army amounted to four million people, which would mean that in addition to numerous civilian casualties, about 2,820 Ukrainian soldiers died every day,” assures this expert.

Despite the high cost, no one at this funeral—or indeed on the streets of Kyiv—seems ready to yield to the enemy. Here the fighting spirit is not clouded by pain, however excruciating it may be. Tatiana Foltova, Ratushni’s partner in the campaign to prevent the development of Protasiv Yar’s green zone, remembers him as a cheerful boy who never doubted what he had to do and was never advised by his friends not to to go to war. They knew if they told him he wouldn’t want to hear it.

“He believed that our nation should be free and that everything must be done to get it. We are losing the best of our generation. It’s awful,” her friend says, trying to suppress her feelings.

The best of a generation

This notion that war takes away the brightest minds of a generation is echoed by many in the gathering. That’s what the mayor of Kyiv, Vitali Klitschko, says in an interview with this newspaper. And another hero walking around: Oleg Sentzov, captured by the Russians in Crimea in 2014 until they freed him in a hostage exchange five years later. “In its 24 years of existence, Roman has achieved more than most people in an adult lifetime,” says the filmmaker today, winner of the European Parliament’s Sakharov Prize.

Foltova is one of the speakers who remembers the young activist on Maidan Square, a few meters from where dozens of protesters died in 2014 against then-President Yanukovych’s decision not to sign the Association Agreement with the European Union. As she speaks, air warning sirens sound and a message on her cell phone warns that authorities are recommending they seek refuge. But nobody moves an inch here. The four-month war and the relative calm in Kyiv in recent weeks have meant that very few people are heeding these messages.

Ratushni was very popular. “Because of his charisma, he could have become our president,” says a young man. This popularity is reflected in a tribute that lasted about six hours in three settings: first, a religious ceremony at the Convent of San Miguel de las Cupulas Doradas; then a civilian in Maidán Square; and to end a funeral with military honors, with the father raising the Ukrainian flag draping the coffin while the mother stoically endured the manner.

The scenes were repeated in the three scenarios: flowers to endure the farewell, music to comfort those left behind, and many flags to cheer up the spirits before the difficult battle ahead. Some said Ratushni’s departure made them realize they must do more to fight for their country. Such is the case of Katerina, a 22-year-old student who arrived in Kyiv two weeks ago after fleeing to Finland with relatives at the beginning of the war. “I haven’t decided what I’m going to do yet, but I know I have to follow his example,” he said.

The war awakened Ukraine’s spirit of survival. And in this ceaseless trickle of their own deaths, others are celebrated as successes. More than 33,000 Russian soldiers have lost their lives since February, according to the latest official figures from Kyiv – which should be taken with a pinch of salt: in every conflict, both sides use information to their advantage. Yulia admits that enjoying the deaths of others is a disturbing thought. But he also says that in these times only the Ukrainians are left to them.