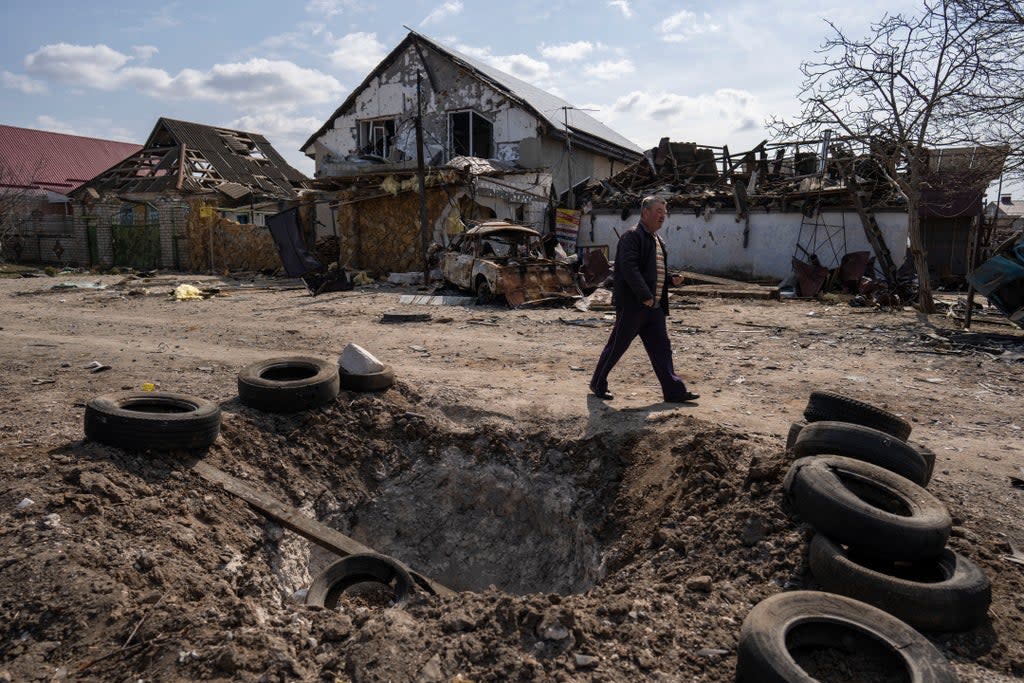 Vladimir Putin faced the prospect of further setbacks in Ukraine, as he appeared to be preparing the Russians for a possible downgrade in their ambitions to seize kyiv to fight for control of the east.

Ukrainian President Volodymyr Zelensky praised his troops for dealing “powerful blows” to the invading forces and urged Moscow to negotiate at the end of the month-long war.

An adviser to the Ukrainian Defense Ministry, Markian Lubkivskyi, predicted that troops could recapture Kherson, the first major city that Kremlin forces seized, on Saturday.

He was skeptical that the Russian president’s goals have really changed from trying to take over the entire nation, but said it appears “the enemy is concentrated in the eastern part of Ukraine.”

Moscow gave its first hint that it might scale back its offensive when it said the “special military operation” would now focus on the “main objective, the liberation of Donbas,” which borders Russia in eastern Ukraine.

Zelensky’s forces were believed to be already retaking ground around the capital of kyiv and the UK Ministry of Defense (MoD) said the Russians “are reluctant to engage in large-scale urban infantry operations”.

Instead, the Defense Ministry said, they preferred the “indiscriminate use of aerial and artillery bombardment in an attempt to demoralize defending forces.”

However, there were new signs that it was Putin’s troops that were struggling with morale, as Western intelligence suggested that a Russian brigade commander, Colonel Medvechek, was deliberately run over and possibly killed by his own troops.

Lubkivskyi told BBC Radio 4’s Today programme: “We cannot believe Moscow’s statements because there are still a lot of falsehoods and lies on that side.

“That is why we understand that Putin’s target remains all of Ukraine.

“We can see now that the enemy is focused on the eastern part of Ukraine, but we are ready for any kind of attack in different places in Ukraine.”

The southeastern port city of Kherson fell to the Russians earlier this month in their first major conquest.

But Lubkivskyi said: “I think that today the city will be completely under the control of the Ukrainian armed forces.

“We have finished in the last two days the operation in the kyiv region, so other armed forces are now focused on the southern part trying to liberate Kherson and some other Ukrainian cities.”

Zelensky claimed in his late-night speech that more than 16,000 Russian soldiers had been killed in the conflict and called on Moscow to negotiate, but warned that he would not give up sovereign territory.

In the UK, Police Minister Kit Malthouse was skeptical of statements from Moscow hinting at a curtailment of its operations.

“I’m not qualified to say, but what I do know is that there is a lot of misinformation and disinformation going around in this terrible conflict,” he said.

“And we must be careful that what appears first is not in fact the truth.

“Hopefully there can be a cessation of hostilities as soon as possible.”

Transport Secretary Grant Shapps has signed new powers to seize two private planes worth tens of millions of pounds, one in Farnborough and the other in Biggin Hill, belonging to sanctioned Russian billionaire Eugene Shvidler.

“Putin’s friends who made millions under his regime will not enjoy luxury while innocent people die,” Shapps said.

Western officials said the Russian statement was an acknowledgment that its forces were overstretched and that they may have to “pause” operations in kyiv and other cities while they concentrate in the east of the country.

Questions continued about how NATO would respond if Putin uses chemical or biological weapons in Ukraine, as it is feared he might do in response to its military problems.

Boris Johnson said after meeting alliance leaders in Brussels this week that he would maintain a “little bit of ambiguity” about the response, but said it would be “catastrophic.”

President Joe Biden said he would receive an “in-kind response” depending on the “nature of use,” though the White House clarified that the United States would not use chemical weapons.

Former Conservative security minister Baroness Neville-Jones has suggested that NATO could take on some kind of army, although she did not say whether she thinks it would be attacks against Russia, against Moscow’s troops in Ukraine or cyber attacks.

The former chairman of the Joint Intelligence Committee told BBC Radio 4 Any Questions?: “I don’t think it’s possible then to continue economic sanctions, it has to be some kind of military response, there are a variety of responses. could take and it doesn’t necessarily have to be in Ukraine: it has a very large landmass called Russia.

“The ministers are not going to indicate what they will do, but I don’t think one should assume that it would only be in Ukraine.”

A Western official said this week that the use of such weapons would mark a “fundamental change” in the Ukraine conflict, but said it was “highly unlikely” that it would encounter NATO troops in Ukraine.

NATO estimates that in four weeks of fighting between 7,000 and 15,000 Russian soldiers have died in combat, compared to the 15,000 they lost in 10 years in Afghanistan.