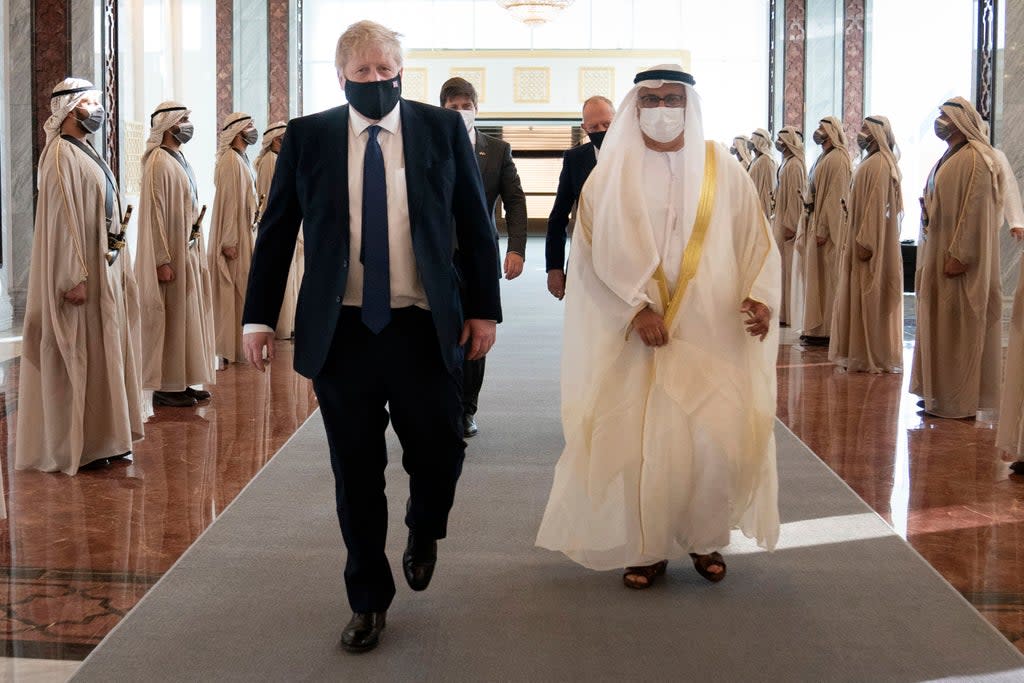 British Prime Minister Boris Johnson arrived in the Gulf on Wednesday for meetings in the United Arab Emirates and Saudi Arabia to ease soaring petrol prices as the West grapples with economic headwinds from Russia’s war in Ukraine.

However, his visit is also about pressuring these top two OPEC producers to pump more oil, which would have an immediate impact on Brent crude prices that nearly hit $140 a barrel in trade last week. Prices have dropped to around $100 in recent days, largely due to new pandemic lockdowns in China.

Russian President Vladmir Putin’s decision to invade Ukraine is “causing global uncertainty and an increase in the price of oil,” Johnson told reporters in Abu Dhabi ahead of his meeting with Crown Prince Mohammed bin Zayed.

“Everyone can see the effect of the increase in gasoline prices that is taking place,” he added.

Because of Europe’s dependence on Russian oil and gas, Putin has been “able to blackmail the West to bail out Western economies,” he said.

Pushing for more oil is a tall order for Abu Dhabi and Riyadh, which are benefiting hugely from high energy prices that boost their income and purchasing power.

Furthermore, ties between Western governments and Saudi Arabia’s Crown Prince Mohammed bin Salman remain clouded by the murder of Saudi writer Jamal Khashoggi. The prince has yet to hold a direct call with US President Joe Biden, who is seeking to revive the Iran nuclear deal to the frustration of some Gulf states and Israel.

Biden ordered a US ban on Russian oil imports after the war and warned that Americans will also feel pain at the gas pump. However, he declared, “Defending freedom is going to cost.”

The COVID-19 pandemic has pushed demand for oil down, with Brent crude prices averaging around $42 a barrel in 2020 before rising as high as $70 last year thanks to an agreement by major oil producers to drastically curb production.

The deal, spearheaded by Saudi Arabia and Russia, calls for gradually raising production levels each month as economies recover, but did not take into account the impact of the war in Ukraine, started by Russia three weeks ago.

Saudi Arabia and the United Arab Emirates have the additional capacity to pump more oil, but have so far been unwilling to change course on the deal forged with Russia. The United Arab Emirates’ energy minister said last week that the country is “committed to the OPEC+ deal and its existing monthly production adjustment mechanism.” His statement followed a contradictory comment from the UAE ambassador in Washington, who appeared to suggest that the UAE was in favor. release more oil on the market.

The Biden administration sent two officials last month to Riyadh to speak on a variety of topics, including global energy supply. In a call with Biden before the visit, King Salman insisted on “the importance of keeping the deal” in place between OPEC producers and Russia, according to a Saudi readout of the call.

“The reason for coming here is that it’s not just that they have oil. They are also some of the biggest investors here in the Gulf in UK renewables,” Johnson said in Abu Dhabi.

Many UK lawmakers, including those from Johnson’s own Conservative Party, have questioned the decision to turn to Saudi Arabia, citing the recent mass execution of 81 people on Saturday. The UN human rights chief said just over half were Shia Saudis who had participated in anti-government protests a decade ago, calling for more rights. Some were executed after trials that did not comply with due process guarantees, said the United Nations High Commissioner for Human Rights, Michelle Bachelet.

Boris said that he has raised human rights issues many times and will raise them again during this trip.

“But we have very, very longstanding relationships with this part of the world and we need to recognize the very important relationship that we have and the strength of that relationship,” he said.