UK has been ‘too slow’ and ‘too weak’ on Russia sanctions, Liberal Democrats say 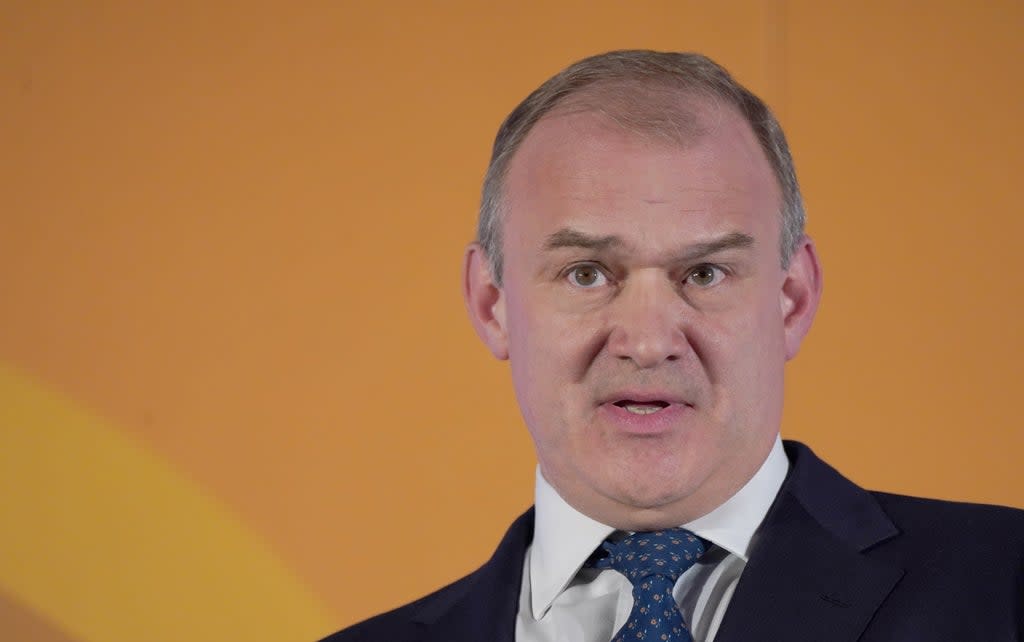 The UK government has been “too slow” and “too weak” on sanctions against the Kremlin, the leader of the Liberal Democrats will argue.

Sir Ed Davey is also expected to accuse the Home Secretary of “rejecting the innocent victims of a tyrant’s bombs” and to demand a coordinated humanitarian response for all refugees fleeing war and terror.

Meanwhile, he will claim that the Conservatives have been “soft on a criminal at number 10”, referring to allegations that Boris Johnson broke coronavirus laws.

It comes after the Lib Dem leader told the AP news agency that Johnson has a bad reputation on the international stage and should resign over the blocking party’s claims despite dealing with the Ukraine crisis.

Sir Ed said he did not share the same view as Labor leader Sir Keir Starmer, who in the wake of the Russian invasion has moderated his demand that the prime minister resign over the so-called partygate saga.

In a speech at the Lib Dem spring conference in York on Sunday, he will urge stronger international cooperation to counter the threat posed by Russian President Vladimir Putin’s regime.

“If we are going to stop Putin, we must remember the simple truth demonstrated so clearly in recent weeks. We are stronger when we act together”, he will say.

“We must fight now for that safer and more liberal world. To reverse this government’s cuts to our military and work with our allies, so that Putin understands that free nations will unite against him.

“For much tougher sanctions, where the Boris Johnson government has been too slow and too weak.

“For a coordinated humanitarian response to all refugees fleeing war and terror, whether from Ukraine, Syria or Afghanistan. Where we never again have a Home Secretary who turns away the innocent victims of a tyrant’s bombs.”

Boris Johnson’s government has been too slow and too weak

The current visa route for people fleeing the war in Ukraine is restricted to family members of people settled in the UK.

Another promised route is expected to be launched on Monday, allowing individuals and businesses to sponsor Ukrainians with no ties to the UK to come to the country.

Home Office Minister Baroness Williams of Trafford told her peers that 1,305 Ukrainian refugee visas had been issued as of Thursday morning, adding: “Those numbers are rising rapidly and that’s a good thing.”

Downing Street said the prime minister had “galvanized the international response to Ukraine” and that Ukrainian President Volodymyr Zelensky had “personally thanked him for his leadership”.

He pointed to existing punitive measures on those linked to the Putin regime, adding that the Economic Crimes Bill, which is expected to receive royal approval soon, will allow the government to “accelerate more sanctions in the coming days.”

Sir Ed will also claim that Conservative MPs “shined away from their responsibility to kick Boris Johnson out of Downing Street” by partygate, accusing them of “cowardice and complicity”.

“Conservatives love to claim that others are soft on crime, the truth is that they are soft on a criminal in number 10.

“The Tory party of the past turns in its grave. Decent lifelong Conservatives loathe this Government,” he will claim.

“And what makes everyone angry, regardless of their views, is that these Conservative MPs think they can get away with it. Conservatives believe they can be taken for fools, just as they take their votes for granted.

“But they won’t get away with it.”

Johnson has sent a questionnaire to police regarding his possible attendance at suspected coronavirus lockdown break parties held in Downing Street, with a handful of Conservative MPs calling for a no-confidence vote on his leadership.

The Lib Dem leader will then urge the chancellor to “go further to help struggling families and businesses” by cutting VAT to 17.5% “right now”.

He said the measure would be worth £600 per household, adding: “That’s the help people across our country need. Not Sunak’s harmful tax hikes.”

The government has decided to go ahead with the health and social care tax in April, which will add pressure on people’s bank balances as the cost of living soars.

“The NHS and Social Care Tax is being put in place to secure £12.5bn for the NHS this year to tackle delays from the pandemic and fix our broken social care system – something the Lib Dem leader himself called a crisis less than a year ago,” they said.

Downing Street said the government is providing more than £20bn this fiscal year and next to help families with the cost of living, adding that it is keeping “all taxes under review”.