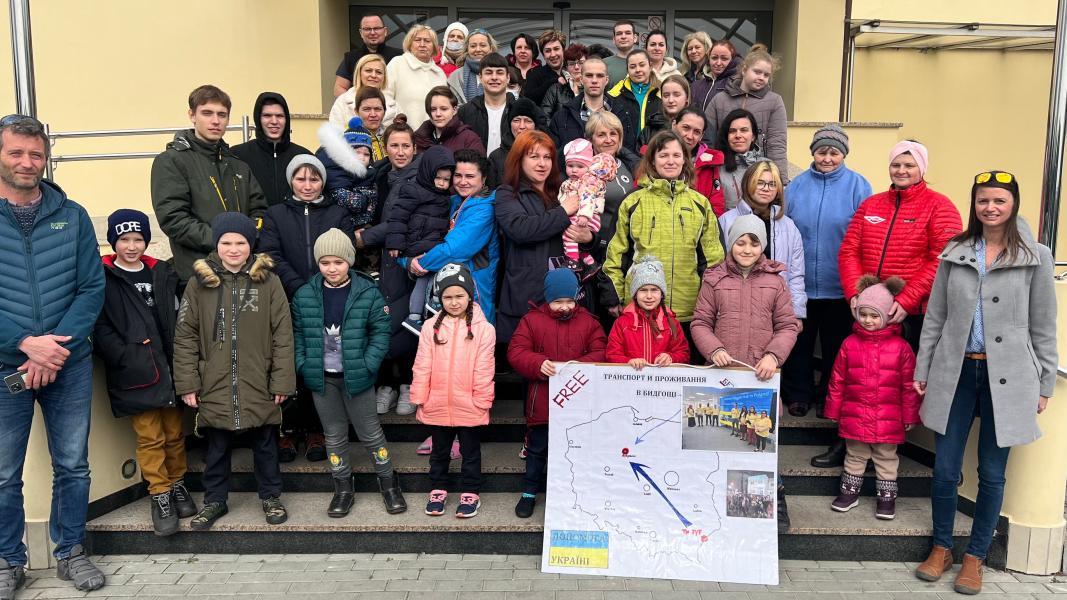 A UK-based couple have rented out an entire hotel in Poland to create a center for refugees fleeing the Russian invasion of Ukraine.

Jakub and Gosia Golata, who immigrated to the UK in 2004, teamed up with the Polish branch of the Sue Ryder charity to take over the Park Hotel Tryszczyn near Bydgoszcz, where Ukrainians can stay while staying with local host families.

Golata, 42, told the PA news agency that he was willing to take immediate action because aid was not getting to the right places fast enough.

He said: “We cannot keep drinking tea and thinking about the crisis; we now have hundreds of thousands of people exposed to potential abuse and sleeping rough.

Mr Golata, who works on the HS2 rail project as logistics manager, has lived with his wife in Barrow upon Humber, in North Lincolnshire, for much of the last two decades.

His wife, a serving Lincolnshire Police officer, is currently on sabbatical caring for her mother in Poland, so shortly after the Russian invasion began, he traveled to join her and try to help. with the humanitarian effort.

Mr Golata said: “I thought, ‘I need to get involved and help as much as I can’, but I wasn’t really sure how I could help.

“So first I thought, ‘I need to see it with my own eyes’ to see how I can help with my knowledge, skills and experience. How I can help?”.

Mr. Golata initially drove a minibus eight hours to the border, picked up refugees and found friends and family who were happy to receive them.

However, after doing this several times, he felt that he needed to do more.

He said: “I came up with this idea that if I could rent an entire hotel and put these vulnerable mothers and children in a hotel, and then allow them to settle in, feel safe, be cared for and be able to come to terms with what’s going on, then that would be the best.

“And that would also allow me to find volunteers from the local community so they can be taken care of a little bit more.”

He was supported by his bosses at Skanska in the UK, who contributed funds and gave Mr Golata time to work on the project, and also linked up with Sue Ryder’s Polish arm to help with fundraising.

He found a 180-bed hotel, which had closed due to the covid pandemic, that he was happy to participate in, and then used his own money to help them get back up and running and prepare for the arrival of the refugees.

Golata then drove a 48-seater bus to the border, where she picked up several families fleeing violence and brought them to the hotel, focusing particularly on those in eastern Ukraine, where much of the worst violence has occurred.

“It was very challenging mentally because the mothers were crying, they weren’t sure what was going to happen,” she said.

Once at the center, their goal is to match the refugees with local families who are happy to host them for a longer period.

They will continue to provide whatever support they can, even after the refugees have moved on.

“It’s a reduction in risk and also a support for both, as much as we care about the refugees we also care about the adoptive families, because they also need support.”

Ultimately, he hopes the government will take over the center and the model will be replicated in cities across Poland, where more than two million Ukrainians have fled so far, according to the UN.

But for now, Golata is working to do its part to help with the “big crisis.”

“We need financial support now to be able to protect vulnerable families from human trafficking, from any form of abuse, which is why it is needed now.

“Later governments will step in and people will settle down and things will be much better, but now we are in this big crisis.”

To donate, go to www.gofundme.com/f/ukrainian-refugee-hub-in-poland