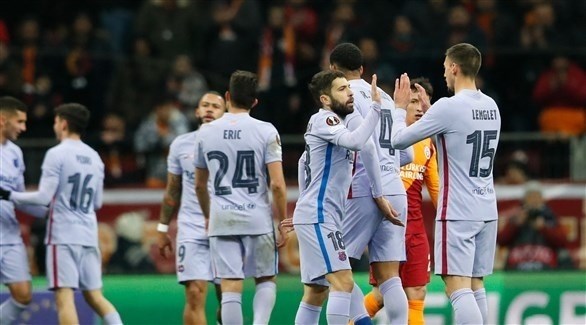 Portugal’s Sporting Braga, Scotland’s Glasgow Rangers and Italy’s Atalanta also secured their place in the quarter-finals, following their results in today’s round of 16 second leg.

The teams from Barcelona and Galatasaray needed to win today’s match, which was played in the Turkish city of Istanbul, after they drew goalless in the first leg, which was played at the Camp Nou stadium, Barcelona’s bastion last Thursday .

Galatasaray scored in the 28th minute through Brazilian Marcao, but Barcelona got up in time to score the equalizer for Pedri in the 37th minute, before Gabonese striker Pierre-Emerick Aubameyang scored the second goal in the minute 49.

With this victory, Barcelona, ​​​​who have maintained an unbeaten record in their last 11 matches in various competitions, took a very good boost ahead of their next meeting with their host and arch-rivals Real Madrid next Sunday, in the Spanish League. .

Barcelona are looking to complete their campaign in the tournament to put a smile on the faces of their fans, who have been frustrated by the team’s faltering results in several other tournaments this season as they exited the Champions League group stage early. of Europe. , before failing to win the Copa del Rey and the Spanish Super Cup, their chances of winning the Spanish League became almost nil.