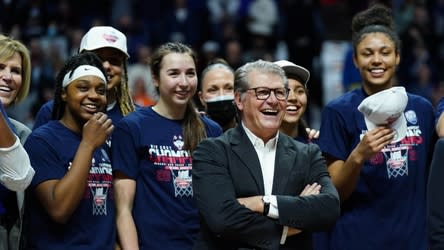 After winning their 20th Big East Tournament on March 7 over Villanova, the UConn Huskies were awarded the No. 2 seed in the 2022 NCAA Women’s Tournament on Sunday night.

UConn (25-5) won’t have far to travel, landing in the Bridgeport region with No. 1 seed NC State.

geno auriemmaThe team from will face No. 15 Mercer (23-6) in the first round in Storrs, Connecticut, on Saturday, March 19.

UConn will be looking to win its 12th national championship, but the road will not be easy.

South Carolina was ranked #1 overall and placed in the Greensboro region. They finished the regular season with a 29-2 record, going 15-1 in the SEC. However, the Gamecocks were defeated by Kentucky in the SEC Tournament championship game. Louisville (25-4) earned the No. 1 seed in the Wichita Region, and defending national champions Stanford (28-3) are the No. 1 seed in the Spokane Region.