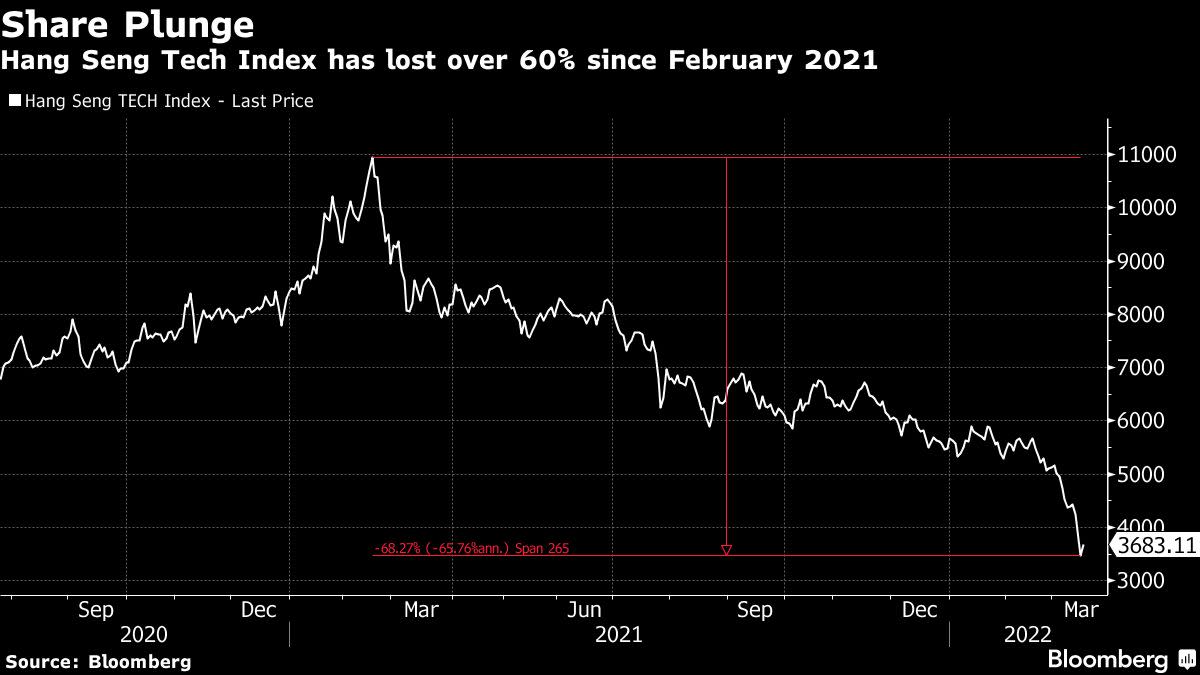 (Bloomberg) — Several private banks are hitting some wealthy clients with margin calls after the near-record plunge in Chinese tech stocks in recent days. Asian clients that have used tech stocks as collateral are being hit particularly hard, according to people familiar with the situation.

UBS Group AG and Union Bancaire Privee are also among the institutions requiring margin calls, as is Citigroup Inc., it said. So far, it has not been possible to find out whether all customers were actually able to provide the additional guarantee.

Chinese stocks have been selling off relentlessly in recent days. Concerns about the country’s ties to Russia and continued pressure from regulators pushed a leading index to its lowest level since 2008. Tech giants Alibaba Group Holding Ltd. and Tencent Holdings Ltd. led the decline. Stocks rallied a bit on Wednesday, but are still trading comparatively low.

Sentiment towards China’s tech sector, already clouded by years of a crackdown from Beijing and the prospect of a Federal Reserve rate hike, has worsened amid the threat of possible delistings from US stock markets. .

There is also the risk of sanctions if China actually supports Russia in the war in Ukraine. Analysts at JPMorgan Chase & Co. have called some Chinese Internet companies “uninvestable.”

Spokesmen for Citi, UBS and UBP declined to comment.

With a margin call, banks ask investors to put cash or valuable securities into their portfolios if the market value of the securities they are lending falls below a predetermined limit. This often happens during a market crisis or other event that quickly erodes the value of the collateral. The bank then also has the right to liquidate clients’ holdings if they are unwilling or unable to deposit these additional funds.