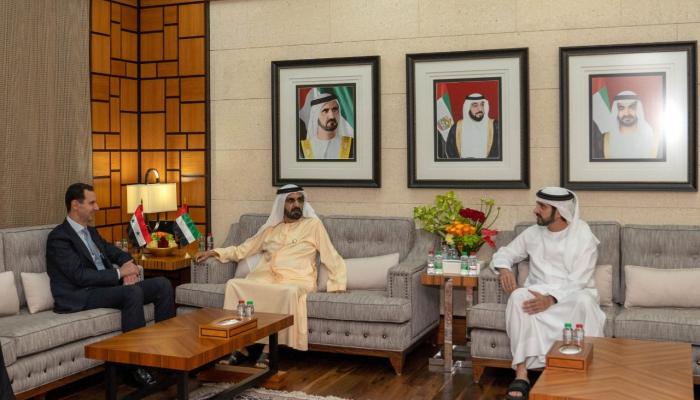 The United Arab Emirates received Syrian President Bashar al-Assad on Friday, who made a working visit to the country.

The Syrian presidency announced, on Friday night, a meeting between Sheikh Mohammed bin Rashid Al Maktoum, vice president and prime minister of the United Arab Emirates and ruler of Dubai, and Assad, in Dubai.

The Syrian presidency added that “Al-Assad and the vice president of the United Arab Emirates discussed bilateral relations and the strengthening of bilateral cooperation on the economic, investment and trade levels.”

Sheikh Mohammed bin Rashid Al Maktoum was quoted as saying: “We express our sincere wishes that security and peace prevail in all parts of Syria, and that all elements of stability and prosperity prevail in the region and throughout the region.”

“We are eager to discover new paths of constructive cooperation with Syria and identify opportunities through which various aspects of cooperation can be furthered,” added Sheikh Mohammed bin Rashid Al Maktoum.

During the meeting, which took place at the Beach Palace, Sheikh Mohammed bin Zayed Al Nahyan welcomed the visit of the Syrian president, which is part of the common concern to continue consultation and fraternal coordination between the two countries on various issues.

He expressed his wishes that this visit be a beginning of kindness, peace and stability for sister Syria and the entire region.

Sheikh Mohammed bin Zayed Al Nahyan was briefed by Al-Assad on the latest events and developments in the Syrian arena.

The two sides discussed brotherly relations, cooperation and joint coordination between the two sister countries to achieve their mutual interests and contribute to the consolidation of security, stability and peace in the Arab region and the Middle East.

During the meeting, the two sides discussed a series of issues of common interest, emphasizing the preservation of Syria’s territorial integrity and the withdrawal of foreign forces, as well as political and humanitarian support for Syria and its sister people to achieve a peaceful solution. to all the challenges you face.

Sheikh Mohammed bin Zayed Al Nahyan stressed that Syria is a fundamental pillar of Arab security and that the UAE wishes to strengthen cooperation with it to achieve the aspirations of the brotherly Syrian people towards stability and development.

They also exchanged views and the positions of the two countries on all regional and international issues and developments of common interest.

Earlier today, Al-Assad arrived in the UAE, where he was greeted upon arrival at Dubai International Airport by Sheikh Mansour bin Zayed Al Nahyan, Deputy Prime Minister and Minister for Presidential Affairs.