UAE Judo monopolizes the titles of the Arab Championship in Jordan 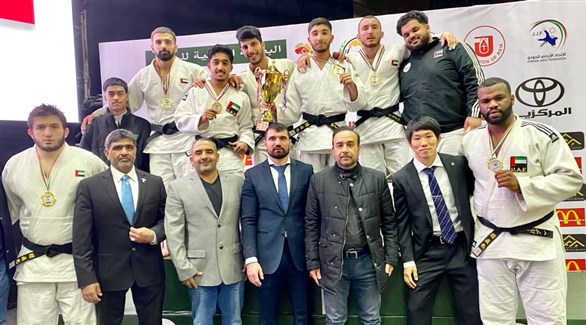 The UAE national team raised its tally at the tournament to 6 gold medals and one bronze medal, including 3 gold medals in junior singles, two gold and bronze medals in men’s singles, and the men’s team championship gold, which is an unprecedented achievement. achievement for the judo team, which became the talk of the tournament in Oman with the participation of 16 countries. .

The UAE team was crowned with the men’s team championship, which included 6 teams, and was divided into two groups, and our team participated in it with the Jordanian and Syrian teams, while the second group was made up of Bahrain, Kuwait and Morocco. , and our team reached the final round by defeating the Jordanian team 4-1, and over the Syrian with the same result, then they won the final against their sister team Bahrain 3-2, while the Syrian team took third place. and Morocco the fourth.

After the victory, the delegation of our team received a phone call from the President of the Wrestling and Judo Federation, Muhammad bin Thaloub Al-Dari, in which he congratulated all the members of the mission, extolling the historic achievement worthy of praise. and praise. , wishing to maintain this level during the next regional and international participations.