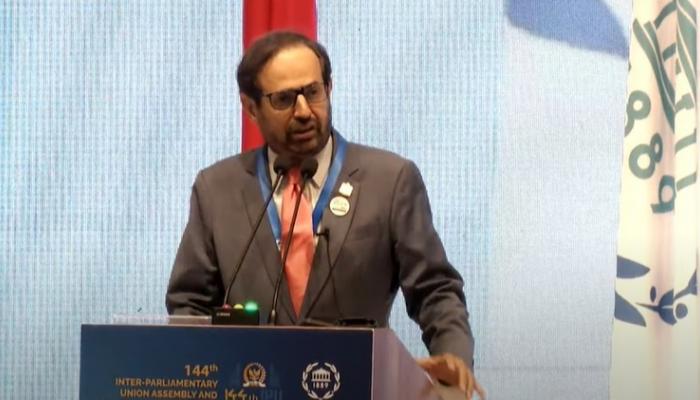 On Monday, the United Arab Emirates participated in the 144th Assembly of the Inter-Parliamentary Union, on the Ukraine crisis.

Dr. Ali Rashid Al Nuaimi, head of the UAE Parliamentary Division delegation to the Inter-Parliamentary Union, stressed the need for the statement issued by the meeting to help bring the parties closer to the crisis and open a dialogue that would help to take real steps toward a solution.

Speaking on New Zealand’s emergency project, “a peaceful solution to the war in Ukraine, in compliance with international law, the United Nations Charter and regional integrity,” he said the world is going through an international crisis. that “disrupts international security and stability”.

Dr. Ali Al-Nuaimi explained during the meeting, which took place on the island of Bali, Indonesia, the importance of the role of the Inter-Parliamentary Union, “which is based on two basic things: the first, the values ​​and principles on which the UIP itself was founded, and the second thing is that the pronouncement issued contributes to solving the problem and does not contribute to feeding it”.

He pointed out that “in all crises, the victims are not only wars, and as long as the crisis is not resolved, there will be victims.”

Here, he emphasized the need for the Inter-Parliamentary Union to take “a position that contributes to solving the problem in the Russo-Ukrainian crisis, rather than being part of its initiation.”

The meetings of the 144th Assembly of the Inter-Parliamentary Union will be held from March 18 to 24, 2022.

Since the beginning of the Russo-Ukrainian crisis and its entry into the military aspect on February 24, the UAE has always called for its solution by peaceful means, making diplomatic efforts to de-escalate, hard work and international social responsibility to avoid humanitarian repercussions. of the war that has been going on for a week, and to spare civilians the negative effects of the sanctions imposed on Moscow.

The United Arab Emirates, which currently chairs the UN Security Council, has repeatedly emphasized the need to ensure that humanitarian aid reaches those who need it and allow it to be delivered unhindered, stressing the importance of a stable regional security environment. .