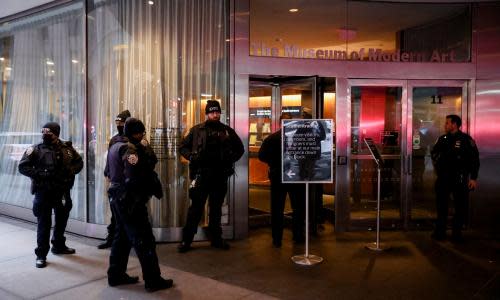 A man stabbed two people inside the Museum of Modern Art in New York on Saturday afternoon after being denied entry for previous disorderly conduct incidents, authorities said.

Police said the two people stabbed were employees of the museum. Both were in stable condition at Bellevue hospital.

A letter was sent to him on Friday revoking the man’s MoMA membership card, and he showed up Saturday afternoon “with the stated intention” of seeing a film being shown at the museum, Miller said.

“He got angry that he wasn’t allowed in, and then he jumped on the reception desk and proceeded to attack and stab two museum employees multiple times,” Miller said.

Miller said the employees were stabbed in the back, collarbone, and neck and were rushed to Bellevue within minutes. “They told us they’re going to be fine,” he said.

Miller said police are trying to locate the man. He said police have video of the man leaving the museum and are aware of the direction he left.

Law enforcement officials are investigating the incident, and the identities of those involved and further details were not immediately available.

“Due to a police investigation, please avoid the area of ​​53rd Street between Fifth and Sixth Avenues,” a tweet from the police department said. “Expect emergency vehicles in the vicinity.”

Witnesses tweeted videos of the evacuation.

Alyssa Katz, deputy editor of The City, an independent nonprofit news organization in New York, wrote: “I went to meet some friends at MoMA They greeted me with a stampede of people fleeing. Museum being evacuated.”

Katz said he had spoken to visitors from France who said they “saw someone stabbed in the armpit on the first floor.”

Another Twitter user wrote:: “They did not tell us what was happening, only that they had to close the exhibitions immediately. A woman said that she was an emergency. She handled herself very well. Hats off to the workers and the NYPD.”

Associated Press contributed to this report