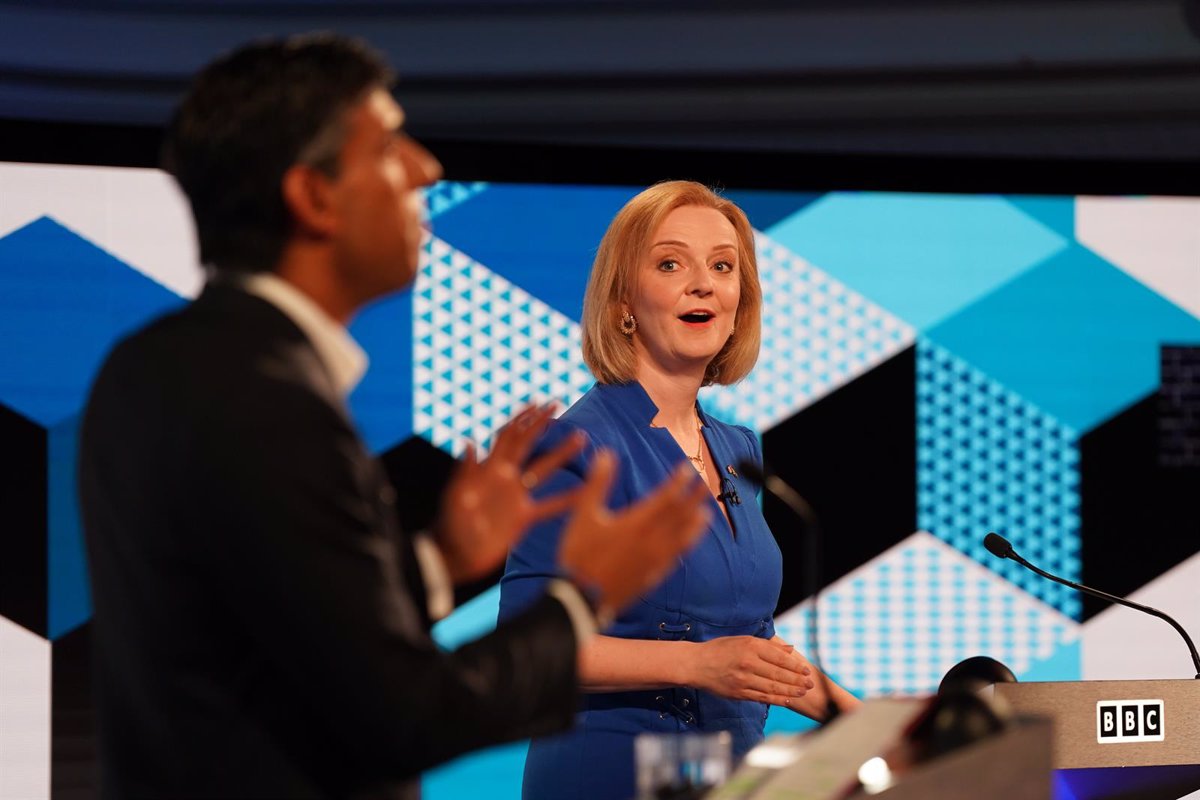 British Foreign Secretary Liz Truss and former British Finance Minister Rishi Sunak, the two candidates to succeed Boris Johnson at the head of the British government, faced each other this Monday in a first debate televised by the BBC and mainly focused on the economy and fiscal policy.

On September 5, around 200,000 party members are called upon to vote in the elections to elect the new Conservative leader and thus the new British Prime Minister. According to a YouGov poll of 730 Conservative Party members, 62 percent voted for Truss and 38 percent for Sunak, Bloomberg reported last Friday.

While the former UK Treasury Secretary defended not cutting taxes until inflation is brought under control, during the debate Truss opted for an “immediate” response, reversing increases in some taxes and a “temporary moratorium” on the green tax introduced bills on energy, as reported by The Guardian.

Britain’s Foreign Secretary has argued that raising taxes at this point would hurt the economy and plunge the country into recession, and has advocated “acting as soon as possible” to ease the burden on families of paying for food and energy reduce.

Truss has also announced an economic growth plan to reverse a recent controversial increase in social security contributions and a plan for the UK government to pay off the debt in three years, The Independent has picked up. .

For his part, Sunak has assured that the tax cuts his rival wants to introduce would leave a £40,000m (€47,000m) hole in public coffers and has stressed that his plan offers long-term “cure” solutions. The British Cost of Living Crisis. “We need to control inflation,” he said.

“They have promised nearly £40billion in unfunded tax cuts, a further £40billion in loans… That’s the country’s credit card. If we don’t pay them now, it will cost them a lot more in the long run. “You and everyone watching at home,” Sunak said, describing his intention to cut taxes “at the right time and without affecting public services.” .

On the other hand, when asked whether they would have Boris Johnson on their executive branch, both candidates have said no, albeit with unequal urgency.

“I’m sure he will play a role. I am sure he will speak, but he will not be part of the government,” said the head of British diplomacy, stressing that she was one of Johnson’s early supporters.

However, Truss has given assurances that the still British ‘Prime Minister’ does not want a future executive role. “He needs a well-deserved break,” he snapped.

Sunak answered the question more directly: “The simple answer for me is no.”

Second in the polls to succeed Boris Johnson in the Conservative Party leadership, Rishi Sunak, has used Truss’s change of heart to attack her and strip her of her authority.

Specifically, the former finance minister accuses his opponent of defending that the United Kingdom and China are experiencing “a golden age” in their bilateral relations.

“I think that was almost a decade ago,” replied the British Foreign Secretary, recalling that just a month ago the Treasury she heads had asked to deepen economic and bilateral ties.

In this regard, Sunak has called for a “tougher stance” on tech companies like Chinese app TikTok.

“We have to learn from the mistakes we made that Europe became dependent on Russian oil and gas, we can’t let that happen to China,” he stressed.

Elsewhere in the debate, Sunak took the opportunity to attack his opponent by reminding him that he was not in the Brexit campaign as Truss initially did not support it.

“Only one of us was in the ‘Leave’ campaign,” Sunak accused his competitor, boasting that he was “pro-Brexit from day one.”

For her part, Truss has recognized the “mistake” of not supporting Brexit from the start and has been committed to making exit from the European Union “a success”.

The two candidates have fully backed Boris Johnson’s plan to continue foreign policy on arms sales to Ukraine and the deportation of migrants across the English Channel to Rwanda.

Asked if they would be willing to send the Royal Navy to the Black Sea to protect shipments of grain from Ukraine, Truss stressed that Britain was unwilling to get directly involved in the conflict, a view Sunak supports.

Likewise, the former finance minister has stressed that the West has “put together some of the strongest economic standards the world has ever seen,” adding that he and Trus have been working together on the project of tougher sanctions against Russia.

As for Rwanda, both candidates for the leadership of the Conservative Party have shown their support for the British Prime Minister’s strategy of deportation to Rwanda.

“I’ll do whatever it takes to make it happen,” Sunak snapped. Truss agreed: “I am committed to carrying out our policy in Rwanda.”

Earlier, Truss had announced his intention to increase the British Border Force’s front-line staff by 20 percent while doubling the Maritime Border Force’s staffing levels, according to The Week.

Sunak has proposed tackling immigration by limiting the number of refugees the UK takes in and housing asylum seekers on disused ships moored across the country rather than in hotels, citing the high cost of asylum.