Truce game with Al-Houthi.. Repression and arrests in Ibb 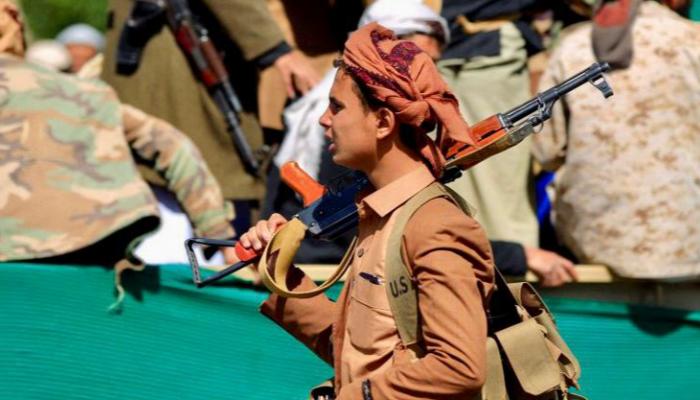 Despite the fact that the Houthi militia affirmed that the “supposed truce” came into force, the killing machine and brutality of its members did not make peace with the civilian population, which continued to be the object of repression and arrests.

New crimes and violations show the adoption of violence and excessive use of force by the Houthi militias against the local population in their areas of control in northern Yemen, while the denouncements of peace and truce made in their media are mere illusion and anesthetize public opinion.

Houthi leaders, who attempted to loot the aid in one of the towns in Al-Qafar district, north of Ibb (Central) Governorate on Tuesday, sparked violent clashes with tribal gunmen in the town, resulting in 13 dead and wounded, including civilians, according to an initial balance, according to a local Yemeni source”.

Clashes broke out in the town from “a cluster” in the district classified as one of the governorate’s core districts, following an attempt by influential Houthi leaders to steal food aid provided by a charitable aid agency before people will confront them.

At least one woman was killed and many civilians were injured, while the death toll in the Yemeni media was contradictory, regarding the occurrence of 3-5 dead and more than 10 injured.

The incident indicates that the Houthi militia and its terrorist elements, under cover of the so-called truce, are empty of repressing the tribes and the population and stealing food from the mouths of the hungry.

In another crime in the same governorate, the Houthi militia arrested 3 politicians, one of them a loyalist, when they were on their way to attend the Yemeni-Yemeni consultative meeting convened by the Gulf Cooperation Council.

Yemeni human rights defenders confirmed that the so-called “security and intelligence agency” of the Houthi terrorist militia arrested the investigator and politician loyal to it, Abdul Rahman Al-Olfi, the secretary general of the Civil Alliance for Peace and Reconciliation. , Hammoud Al-Awdi, and the spokesman for the same political alliance, Anwar Shaab, in Ibb Governorate.

According to prominent Yemeni human rights lawyer Abdullah Al-Alfi, the Houthi militia’s political bureau had given the three politicians prior approval before the security apparatus, more closely affiliated with the Iranian Revolutionary Guards, stepped in to arrest them in the road to Aden. .

Hammoud Al-Awdi, one of the detainees, had led, in recent years, with local personalities, an initiative to open roads between liberated and unreleased areas, especially the Al-Dhalea roads connecting Aden and Sana’a, before the militias failed in their efforts and blew up most of the vital bridges connecting the governorate.

The Iranian-backed Houthi militia rejected the Gulf Cooperation Council’s invitation for Yemen-Yemen consultations and escalated its terrorist operations in an unprecedented manner before devising a fake truce in an effort to circumvent and escape any peace process. and put an end to the catastrophe of the war that triggered it.

On the other hand, a boy under the age of 18 breathed his last in a detention center for the Houthi militia, just 3 months after his arrest in the reserve prison in Ibb on mysterious charges and circumstances.

Human rights sources said that the boy, Bakeel Al-Maabri, was released from the prison under the control of the Houthi militia, after his health deteriorated, without the militia leaders supervising the prisoner and allowing any medical intervention.

Last year, Ibb Governorate witnessed more than 3,419 crimes committed by the Houthi terrorist militia, including 213 murders and the arrest of 482 civilians, while nearly 65 civilians were subjected to horrific torture in its brutal prisons.

Human rights reports had documented many Houthi violations against detainees as a result of systematic and systematic torture in Houthi prisons, including exposure to psychological and physical torture, and deprivation of their basic rights, in a manner that violates minimum human rights.