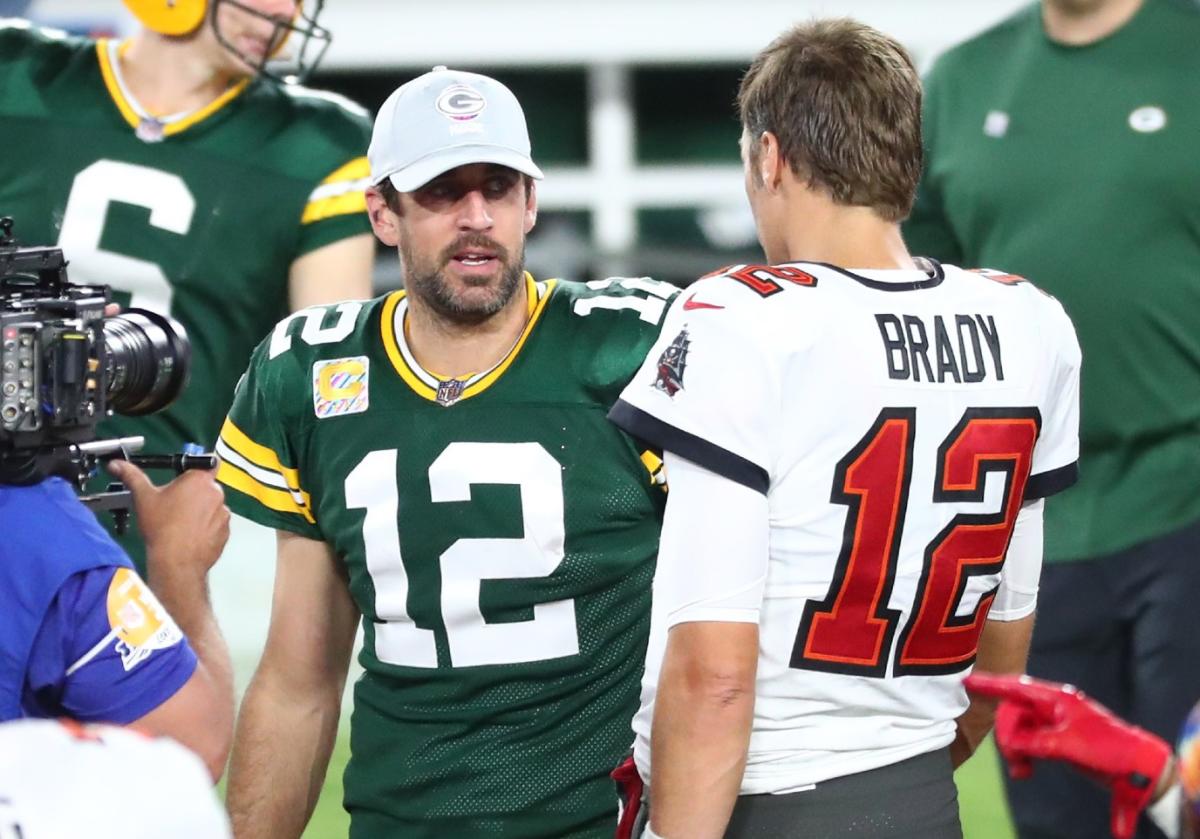 One withdrew, more or less, for 40 days. The other threatened him for months, if not years. In the end, though, both of the NFL’s middle-aged star quarterbacks are back, and their 2022 contracts make their motivations clear.

For Tom Brady, 44, and Aaron Rodgers, 38, it’s about the Super Bowl and little else.

Brady will return to Tampa on a friendly deal with the team he signed a year ago, which cost the Buccaneers just $20.3 million (or 9.85 percent) against the salary cap. He ranks 13th among quarterbacks, just behind the Los Angeles Rams’ Matthew Stafford, who is owed $23 million a year after leading, not coincidentally, a balanced team to the Super Bowl.

Meanwhile, Rodgers agreed to a three-year, $150 million deal last week. While the $50 million average is the highest in league history, the deal is delayed so as not to cripple the current Green Bay Packers.

Rodgers’ salary cap for 2022 will be just $28.5 million, a relative bargain for a starting QB, let alone the guy who won the last two MVPs. It should be about 13 percent of the salary cap and will be below what Washington pays Carson Wentz and Detroit assigns Jared Goff.

More importantly, it’s down from the $46.7 million it would have cost Green Bay if the contract hadn’t been restructured. That would have gobbled up about 21.7 percent of the cap. No team has ever won the Super Bowl with a quarterback taking more than 15 percent.

How much more Rodgers will be in 2022 compared to the other highest-paid quarterbacks of all time:

This is a team game and no one, not even Brady and Rodgers, can win it alone. Brady has won seven Super Bowls in part because of a longstanding willingness to accept minor monetary deals for team success.

Don’t worry about Brady. He’s not clipping coupons or worrying about gas prices. He will top $300 million in career earnings this season, according to Spotrac.com. And that doesn’t even count his numerous endorsements, or even the sheer amount of money his wife, supermodel Gisele Bündchen, has made.

Rodgers has earned $263.6 million in salary and bonuses so far, according to Spotrac.com. He too, in case you don’t have a TV, is prominent in the commercials… something about insurance.

And Rodgers will get his money on this contract. All $150 million is guaranteed. With a signing bonus, he will earn $41 million in 2022.

It’s just that Green Bay will continue to have to restructure the deal annually and is essentially mortgaging the future for the present. That alone is a sea change in the way the Packers have done business in general, one more sign that Rodgers won his battle with the franchise to change his ways and contend for titles.

Both Brady and Rodgers closed their deals before or when free agency began; the “legal manipulation” period began on Monday.

Tampa Bay had nearly two dozen free agents, including more than a half-dozen top contributors. The Bucs can now re-sign as many as possible and probably still have the money to find an innovative wide receiver to replace Antonio Brown and beef up the offensive line to protect Brady.

Meanwhile, Green Bay can now try to work its way under the salary cap and prioritize landing wide receiver Davante Adams on a long-term deal rather than resorting to the franchise tag. Making sure Rodgers’ main weapon is happy will be critical.

Paying difference-maker stars while maintaining the flexibility to fill out a full, competitive roster is the NFL’s toughest balancing act.

For at least 2022, Tampa and Green Bay have. They had to, really. There’s no point in having older quarterbacks if you’re not going all out. And, conversely, there’s no reason for Brady and Rodgers to keep playing unless they’re on teams that have a real shot at winning it all.

That was part of the motivation that drove Brady out of New England to the Bucs two years ago (he won the title) and Rodgers to play hard in every conceivable, often passive-aggressive way: make the Packers fold. his vision

They will be paid a lot of money, no doubt. But they’re not doing this just for the money. They could have demanded more. Instead, his cap hits for 2022 are more likely to help than those of Deshaun Watson ($40.4 million), Ryan Tannehill ($38.6 million) or Patrick Mahomes ($35.8 million).

For Green Bay, there is risk, of course. At some point, the bill is due, though when new NFL media deals take effect, the salary cap is expected to rise, mitigating the impact.

The Packers also have to deal with the concept that Rodgers once again has all the power. This deal is likely to be restructured each year Rodgers continues to play, meaning he can continue the soap opera of his future that in 2020 he called a “beautiful mystery.”

That may sound like a headache, but know this: Ever since Rodgers started fighting with management, he’s led the Packers to back-to-back 13-win seasons and those MVPs. His game is better than ever. The playoffs have brought disappointments and home losses, including one to Brady, but Rodgers appears to be a guy who thrives on chaos and attention.

Letting it all play out will be a nonmonetary cost to the Packers.

They can at least put some talent on the field that makes the Super Bowl a possibility. Same with Tampa Bay.

The old guys are back and, at least by salary-cap standards, they’re something of a bargain.

- Advertisement -
Share
Facebook
Twitter
Pinterest
WhatsApp
Previous articleThis is Marina Ovsyannikova, the woman who spoke out against Putin’s war on Russian television and is now facing lengthy prison terms.
Next articleKarel Komárek Profile: The Entrepreneur Who Will Run the UK’s National Lottery