To promote trade… a virtual corridor between the Emirates and Kuwait 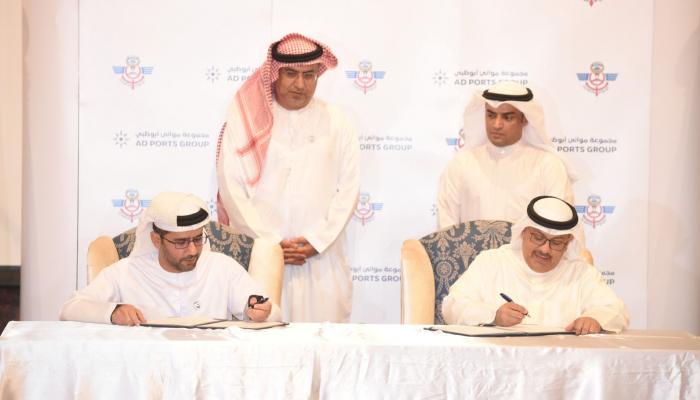 Abu Dhabi Ports Group and the Kuwait General Administration of Customs seek to support trade between the two countries.

Abu Dhabi Ports Group announced the signing of a memorandum of understanding with the Kuwait General Administration of Customs with the aim of establishing a virtual trade corridor – digital integration – between the UAE and Kuwait, under the supervision of the Department of Economic Development – Abu Dhabi .

The signing ceremony of the memorandum of understanding took place under the patronage of Abdul Wahab Mohammed Al-Rasheed, Minister of Finance and Minister of State for Economic Affairs and Investment of Kuwait, and in the presence of Dr. Matar Hamed Al Neyadi, Ambassador of the UAE to Kuwait The MoU was signed by Captain Mohamed Juma Al Shamsi, Managing Director and CEO of Abu Dhabi Ports Group; and Suleiman Abdulaziz Al-Fahad, Director General of the General Administration of Customs of Kuwait, after the visit of the Logistics Committee of the Department of Economic Development – Abu Dhabi to the State of Kuwait.

The memorandum stipulates that Al Maqtaa Portal, the digital arm of Abu Dhabi Ports Group, and through the advanced trade and logistics platform / Otlob, will develop the virtual trade corridor under the supervision of the Department of Economic Development – Abu Dhabi, and will presented as a continuation of the close cooperative relations between the two countries.

Under it, new and integrated policies, procedures and systems will be established that will support the virtual trade corridor, which helps to simplify and facilitate cross-border trade.

The establishment of this new virtual trade corridor, and the implementation of the solutions associated with it, provide different possibilities for the registration authorities in the two countries to ensure that they obtain all the information related to international shipments and merchandise before their shipment. arrival, thus facilitating the pre-clearance of shipments and achieving significant savings in the time and cost required to complete them.

The MOU also provides many benefits that speed shipments of perishable goods and reduce wait times at border crossings on both sides.

Digital integration offers multiple benefits and advantages in terms of security and protection, which guarantees the competent authorities a clear vision that allows them to carry out a comprehensive digital control of the goods that are transported between the two countries, in addition to its ability to reduce the time needed to inspect goods, and simplify paperwork for permit holders.

Dr. Matar Hamed Al Neyadi, the country’s ambassador to Kuwait, said: There is no doubt that the cooperation between Abu Dhabi Ports Group and the Kuwait General Administration of Customs to establish the first virtual corridor would further contribute to enhancing trade between the two sister countries, and meet their goals in digital transformation and facilitate shipping procedures in a way that would further reduce transportation and shipping costs, help broaden the horizons of economic cooperation between the two sister countries, facilitate movement of supply chains and would encourage entrepreneurs to invest more, using the best digital solutions and logistics services provided by the virtual trade corridor between the Emirates and Kuwait.

Ambassador Al Neyadi emphasized that the opportunities for cooperation between the UAE and Kuwait are excellent and the markets of the two countries are promising.

For his part, Rashid Abdul Karim Al Balushi, Undersecretary of the Department of Economic Development in Abu Dhabi and Chairman of the Logistics Sector Development Committee, Department of Economic Development – Abu Dhabi, pointed out the importance of this memorandum, highlighting that it constitutes an important step towards consolidating joint cooperation between the two sides. He said: The establishment of this trade corridor contributes Virtual reality has a positive impact on the development of the national economy in the two countries and supports the efforts made by the wise leadership in both the United Arab Emirates and the State of Kuwait, with the aim of strengthening commercial ties and brotherly relations between the two sister countries, as well as playing an active role in consolidating the position of the Emirate of Abu Dhabi as a leading global hub. .

Mr. Sulaiman Abdulaziz Al-Fahad, Director General, Kuwait General Administration of Customs, said: We are pleased to sign the Memorandum of Understanding with Abu Dhabi Ports Group, which is part of our strategic plan to develop the capabilities of the port system. customs work in Kuwait with the aim of facilitating business and reducing manual revisions to complete administrative and customs procedures Facilitate the commercial community of both countries through an agreement that benefits from the advantages of the global logistics passport.

He added: The signing of the memorandum of understanding is the culmination of cooperation efforts, joint work and mutual visits between the logistics committees of the two countries, hoping that it will provide high-level facilities for both customs administrations and trade partners.

On this occasion, Dr. Noura Al Dhaheri, Head of Digital Sector – Abu Dhabi Ports Group, and CEO of Al Maqta Gateway, said: Based on the joint trade relations and ties between the UAE and the State of Kuwait, we seek, through this virtual trade corridor, to develop policies, procedures and integrate digital systems, even leading to the acceleration of bilateral trade between the two countries and the facilitation of the movement of goods.

He added: Since its establishment, Al Maqtaa Gateway has been committed to making all efforts that support the adoption of the latest digital solutions within the trade, industry and logistics sectors in the region by providing the best solutions needed to achieve the required change. in these sectors By default, it will allow us to help support import and export activities between the two countries and raise trade efficiency to new levels.

The long-standing bilateral trade relationship between the United Arab Emirates and Kuwait has seen remarkable growth in recent years in terms of the size and type of traded goods: tons of petroleum coke and petroleum tar products, worth 213 million dirhams.

In the same year, the State of Kuwait imported from the United Arab Emirates more than 18.94 million tons of gravel and stones used in the concrete industry and infrastructure projects, worth 650 million dirhams, in addition to more 18 tons of jewelry and pieces. of precious metals, worth 2,800 million dirhams, and 16 Tons of raw or semi-finished gold, with a value of more than 3,160 million dirhams. Trade between the two countries also witnessed a notable increase in a number of materials, including electronics, medicine, foodstuffs and plastics.