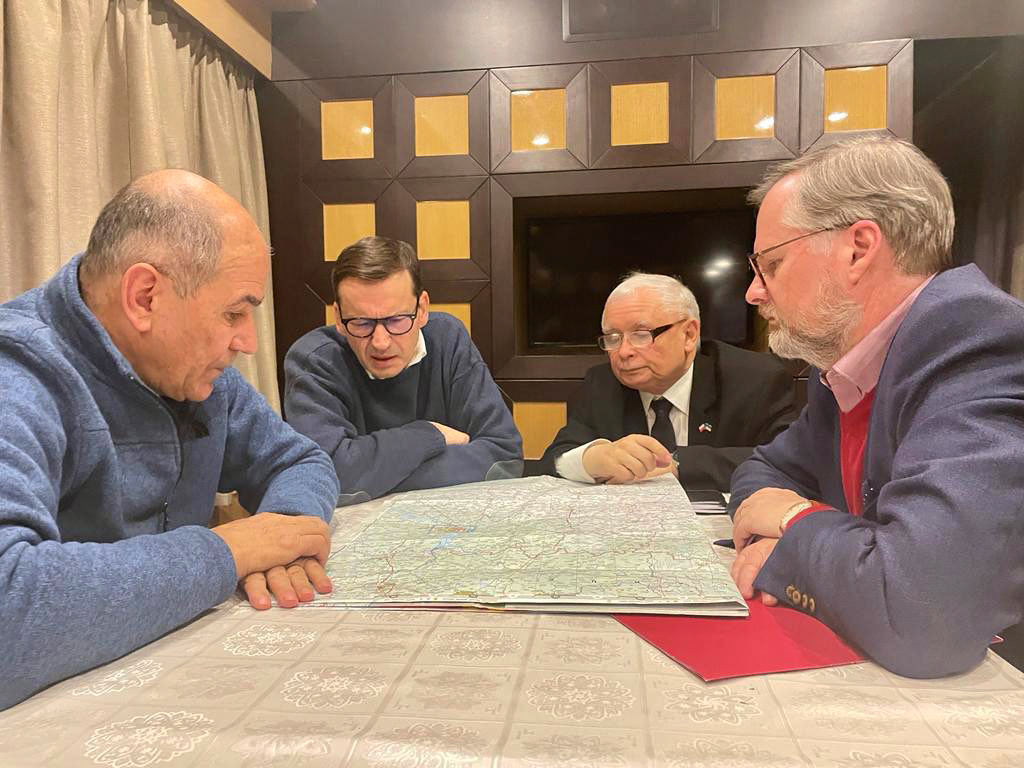 The fierce fighting in Ukraine does not end, many people are killed in attacks on a television tower and a school. Meanwhile, diplomatic efforts continue. A famous heroine is tried in Russia and is convicted.

According to Polish Prime Minister Mateusz Morawiecki, the heads of government of Poland, the Czech Republic and Slovenia have arrived in kyiv. “Here in war-torn kyiv, history is being made,” Morawiecki wrote on Twitter on Tuesday.

He also posted photos showing him with his Vice President Jaroslaw Kaczynski, Czech Prime Minister Petr Fiala and his Slovenian counterpart Janez Jansa at a table with a map of Ukraine. “The EU supports Ukraine, which can count on the help of its friends: today we brought this message to kyiv,” Morawiecki wrote. There they wanted to meet with Ukrainian President Volodymyr Zelenskyj and Prime Minister Denys Schmyhal. Talks between Russia and Ukraine, which were suspended on Monday, continued.

Meanwhile, Russian attacks on Ukrainian cities continued on the 20th day of the war. According to Ukrainian sources, 19 people were killed and nine wounded in an attack on a television tower near the city of Rivne in northwestern Ukraine. A school was shot at near the southern Ukrainian city of Mykolaiv, killing seven people. The Ochmatdyt Hospital in Lviv (Lemberg), near the Polish border, is overwhelmed by the number of injured children arriving from conflict regions, according to the UN children’s fund, Unicef.

Meanwhile, Ukrainian troops said they were fending off a Russian advance on the beleaguered port city of Mariupol. Some 150 attackers were killed and two tanks and several armored vehicles were destroyed, the Ukrainian General Staff said. Mariupol on the Sea of ​​Azov has been under siege for days by Russian army units and pro-Russian separatists. Hundreds of thousands of people endure there in catastrophic conditions. According to authorities, people were able to get to safety in about 2,000 cars on Tuesday. Another 2,000 cars were waiting outside. It was not yet clear whether a convoy carrying tens of tons of relief supplies and empty buses for an evacuation reached Mariupol, which was surrounded by Russian troops.

Solidarity visit to the war zone

The decision to visit the heads of government of Poland, the Czech Republic and Slovenia was made at last week’s EU summit, Polish government spokesman Piotr Müller said. They represent “de facto the European Union, the European Council”. In kyiv, the delegation will give a signal of support for Ukraine’s freedom struggle and present a concrete support package for Ukraine.

Chancellor Olaf Scholz was positive: it is currently a matter of “using all discussion formats and sticking to them”, said the SPD politician in Berlin. It’s “good if you try to be helpful in this situation in different ways.”

The heads of state and government of the NATO countries will meet next week for a special summit. The meeting will be organized for March 24 at the alliance’s headquarters in Brussels, as announced by NATO Secretary General Jens Stoltenberg. US President Joe Biden is also expected to be a guest at the EU March Summit scheduled for March 24-25. This was confirmed by a senior EU official. The deliberations are the second at the level of heads of state and government since Russia invaded Ukraine on February 24.

Far-reaching decisions at next week’s summit are considered unlikely. However, there is likely to be discussion of, among other things, whether NATO will react to Russia’s westward drive with a substantial and long-term reinforcement of the eastern flank.

Following her protest on state television against the Russian war of aggression, a television employee was fined 30,000 rubles (226 euros). Before that, there had been no sign of Marina Ovsyannikova for hours. The editor of Russia’s state television Channel One held up an anti-war protest poster for the camera on Monday night’s top news.

The poster also said that viewers “are being lied to here.” Initially, it was feared the woman could be convicted of defaming the Russian military under a controversial new law. She is at risk of up to 15 years in prison. After her protest, Ovsyannikova received a wave of world recognition.

Both Russia and Ukraine report military successes. According to the Ukrainian armed forces, they have defended themselves against Russian attacks on several fronts. The Ukrainian General Staff announced that Russian forces had been unable to break through the defenses north of kyiv. The attackers could also not have taken the city of Makariv, west of the capital.

The Russian military announced that it had taken control of the entire Kherson region of southern Ukraine. About a million people live there. The occupation was not initially confirmed by the Ukrainian side. Information cannot be independently verified.

kyiv Mayor Vitali Klitschko imposed a curfew from Tuesday night to Thursday morning after heavy attacks in the city. During this time, residents are only allowed to leave their homes to seek shelter in shelters and bunkers. According to official information, four residential buildings in various districts of the capital were hit by rockets on Tuesday morning, killing at least two people. Russian troops try to surround the capital from various sides.

- Advertisement -
Share
Facebook
Twitter
Pinterest
WhatsApp
Previous articleGuedes says that the Brazilian government can skip spending limits if necessary due to the war
Next articleThis is Marina Ovsyannikova, who spoke out against Putin’s war on Russian television, and is now on trial.

Alcaraz learns to suffer on grass and survives his Wimbledon debut

Top 10 of the historical table of Latin American teams in the World Cup, and Ecuador?