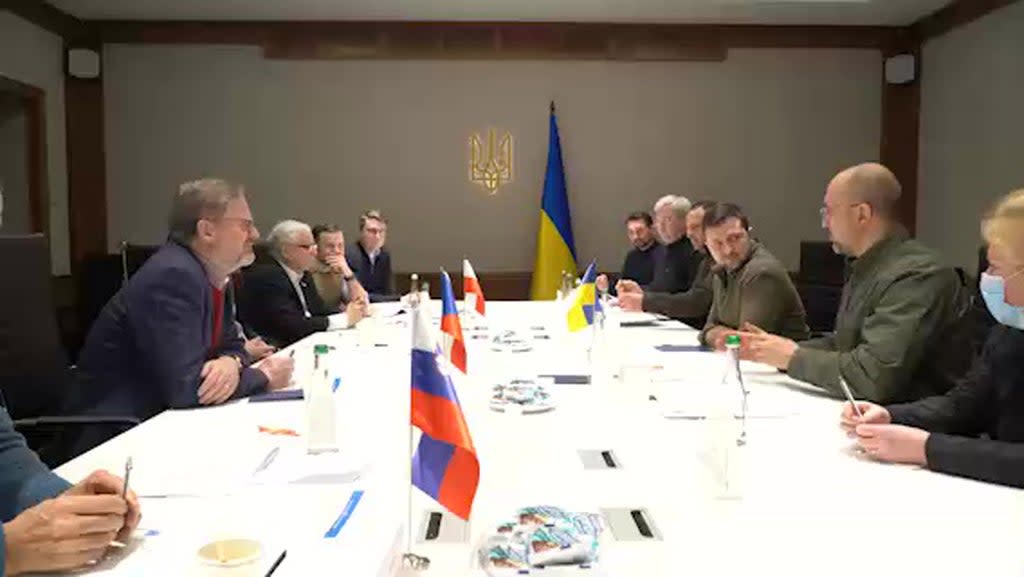 Three European prime ministers have met with Ukrainian President Volodymyr Zelensky in kyiv after traveling by train to the capital which is currently being targeted by the Russian military.

Despite concerns within the European Union about the security risks of traveling to a war zone, the leaders of Poland, Slovenia and the Czech Republic undertook the dangerous journey by train on Tuesday, as kyiv residents entered a 35-hour curfew in response to Russian bombing. .

Zelensky expressed his gratitude for his visit, calling it a “powerful testimony of support.”

The Ukrainian leader, who is said to have seen more than a dozen assassination attempts, posted a video on Facebook showing him sitting around a table with the three leaders and other officials, briefing them on developments in the war.

After the meeting, he said that he was sure that “with such friends” Ukraine could defeat Russia.

“And most importantly, we absolutely trust the leaders of these countries and, therefore, when we talk about security guarantees, our future in the European Union, or we talk about sanctions policy, we know 100% that everything we are discussing really leading to that positive goal for our country, for our security and for our future,” Mr. Zelensky said.

These comments were separate from those, also on Tuesday, in which the Ukrainian president said Ukraine should accept not becoming a NATO member, hinting at a possible key concession to Russia, as one of his advisers said “certainly there was room.” of compromise” in the talks between kyiv and Moscow.

Also posting on social media, Poland’s Prime Minister Mateusz Morawiecki said: “It is here, in war-torn kyiv, that history is being made. It is here, that freedom fights against the world of tyranny. This is where the future of all of us hangs in the balance.”

Morawiecki and Poland’s Deputy Prime Minister Jaroslaw Kaczynski, along with Prime Ministers Petr Fiala of the Czech Republic and Janez Jansa of Slovenia, said they were on an EU mission.

But officials from the 27-nation bloc insisted the trio had set out independently.

Fiala said that the main purpose of the visit was to tell Ukraine that “it is not alone”, adding: “Our countries support you. Europe is by your side”.

Two weeks after Zelensky made an emotional appeal to the European Parliament for Ukraine to be accepted as a member of the EU, Jansa described the visit as a way of sending a message that Ukraine is a European country that deserves to be accepted into the EU one day. political bloc.

Jansa, a right-wing populist friend of Hungary’s Viktor Orban, said the war has awakened in Europeans the idea that the bloc represents fundamental ideas that are under threat and that Ukrainians are defending with their lives.

“Thank you for not only defending your homeland and Europe as a territory, but for defending the very essence of European values ​​and our way of life. Your fight is our fight and together we will win,” she wrote on Twitter.

The three countries are among those that, four days after Vladimir Putin’s invasion, called on the EU in an open letter “to immediately grant Ukraine the status of an EU candidate country and open the process of negotiations.”

But last week, after a two-day meeting in Versailles, EU leaders stopped short of speeding up kyiv’s application for membership, instead issuing a statement that simply “recognized Ukraine’s European aspirations and European choice.” .

He said Zelensky’s request had been “quickly” forwarded to the European Commission for “their opinion”, adding: “Pending this and without delay, we will further strengthen our ties and deepen our partnership to help Ukraine pursue its European path… .Ukraine belongs to our European family”.

Poland, Slovenia and the Czech Republic were previously part of the communist bloc, but are now members of NATO.

When asked about Tuesday’s visit, NATO Secretary General Jens Stoltenberg did not explicitly endorse it, but said: “I think it is important that the leaders of the NATO countries, of the European member states, engage closely with President Zelensky”.

The visit was planned for several days but was kept secret for security reasons, Morawiecki’s chief of staff said.

Just hours before the leaders arrived in kyiv, explosions were heard throughout the city in what Ukrainian authorities said were Russian artillery strikes.

Announcing the new curfew, in effect until Thursday morning, kyiv’s mayor said Russian forces based outside the city had attacked several apartment blocks, killing at least two people. Shock waves from an explosion also damaged a subway station that has been used as a bomb shelter.

Before his departure, Morawiecki recalled on Facebook how then-Polish President Lech Kaczynski had paid a visit to the Georgian capital in 2008 when it was under attack by Russia.

He quoted the late Kaczynski, who at the time told some 150,000 people gathered in Tbilisi: “Today Georgia, tomorrow Ukraine, the day after tomorrow the Baltic states, and then maybe it’s time for my country, for Poland.”