Thousands of Moroccan students returning from Ukraine. A source reveals to “Al-Ain News” their academic fate 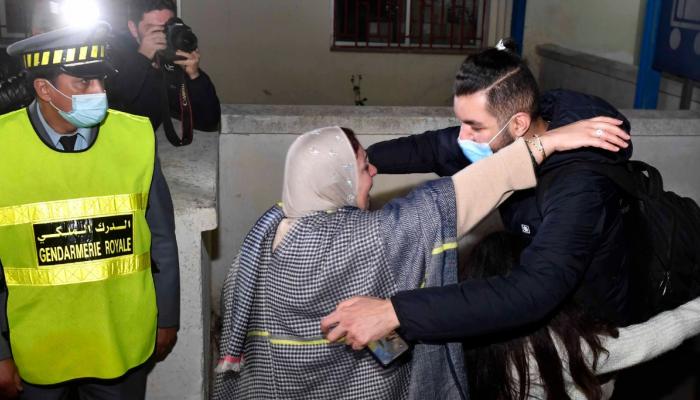 After huge and successful efforts to evacuate them from the fierce battles, Moroccan students returning from Ukraine face challenges related to their academic integration.

The Moroccan government has been studying for some time the options available to accompany students returning from Ukraine in the completion of their academic path, after the war in Ukraine dragged on for a month.

Mustafa Paytas, Delegate Minister in charge of Relations with Parliament, spokesman for the Government, confirmed this Thursday in Rabat that the Government is studying the options available to accompany students returning from Ukraine in the completion of their academic career.

In a press interview after the weekly government meeting, Paytas said that after opening the door for these students to express their wishes and declare their degrees and university levels, in a first stage they work, in a second stage, to audit the requests. and check the data.

The minister added that once the total number of these students has been inventoried and their specializations and university levels determined, the options that allow them to complete the school year will be studied, and he pointed out that the Government holds continuous meetings with all the parties that can contribute. to find solutions to this file.

The official indicated that, until Wednesday, more than 7,000 Moroccan students returning from Ukraine were counted on the electronic platform set up by the Ministry of Higher Education for this purpose.

Interacting with the topic, a source from the Coordination of Moroccan Students in Ukraine revealed that students who wish to complete their studies in Morocco will be integrated, provided that communication is established with Ukraine’s neighboring countries to facilitate study there for those who wish to return. there.

The same source explained, in an interview with “Al-Ain Al-Akhbar”, that a group of students demand their inclusion in the Moroccan educational system to complete their studies, while another group wants to return to neighboring countries of Ukraine to finish His studies. there.

He also thanked the Moroccan government, headed by Moroccan King Mohammed VI, after taking the initiative and returning Moroccan students to the homeland, as well as promising to integrate them into Moroccan universities to complete their studies.

He demanded that the Moroccan government, headed by the Ministry of Foreign Affairs and the Ministry of Higher Education, communicate with the Ukrainian authorities to obtain the documents of the students, as well as everything that proves the level and educational level of the same in Ukraine. in order to use them to access the different institutions of university education, either in Morocco or in other countries.

A member of the Coordination of Moroccan Students in Ukraine added that, in the coming days, a request will be submitted to meet with Moroccan officials to dialogue, propose a set of solutions and participate in the committee that prepared them.

The Moroccan student indicated that the official data presented today during the press conference by the official spokesman for the Moroccan government indicates that more than 7,000 students have registered on the platform created by the Ministry of Guardianship.

On the existence of demands not to integrate Ukrainian students in Moroccan universities, the coordination member said that “those who reject our entry are a small group that speaks about the issue”, adding that the matter remains in the hands of the government. . authorities, who have the last word to make the appropriate decision that takes into account the interests of all Students, whether inside or outside Morocco.

On the other hand, the same speaker highlighted that the coordination has also launched a platform for the registration of Moroccan students in Ukraine in order to know their needs and communicate with them to discuss their problems and work to give a set of proposals and solutions to the custodians of the sector, adding that until this week more than 3 had been registered. Thousands of students are on this platform.

After the return of the students to Morocco, and the conditions they went through to reach the kingdom, there is a call from actors in the education sector as well as experts in psychology to support these students to overcome this crisis that could affect them as a result. of the war in Ukraine and how to return to Morocco.

Speaking to “Al-Ain News”, Mohsen Benzakur, a psychology expert and research professor in social psychology, said that it is necessary to understand the “concept of a student”, which defines “students who have not completed their first year in Ukraine and whose age is close to or a little over 18 years old, and that There are students who were preparing to graduate from Ukrainian universities at the end of this academic year, and only four or five months apart from the end of their academic training there.

Benzakour added that these two categories suffer the most, given the fragility of the experience, while the second category, which is nearing the end of the study, is experiencing “hopelessness,” making the two categories represent fragility. of the structure in addition to the shock of the war, then moving forward with all its fears and the war conflict, which is characterized by a kind of fear and terror, as well as reaching the borders with the neighboring countries of Ukraine, with great personal suffering , despite the arrival of Moroccan evacuation planes to Ukraine’s neighboring countries.

The same speaker highlighted the problem that some of these students have a strength of character, which will mark the experience of leaving Ukraine in the context of the war for them as a “psychological support and strength” for their personality, while there is others. who have a “disposition to fear or panic”, which makes it imperative that they be accompanied and psychologically supported due to the trauma they experienced due to the war and the prospect of the future and the lack of hope of return.

Regarding some calls by Moroccan students not to integrate students who return from Ukraine to Moroccan universities until the structure that will receive them is rehabilitated, the professor, a researcher in sociology, said that from the social point of view, both parties have “reason”.

He explained that Moroccan students returning from Ukraine want a kind of stability and guarantees to complete the school season, while students here in Morocco suffer from a number of difficulties, including that the student does not reach the stage of training until after speaking with the professor / supervising doctor and the presence of a long period due to their large number, the lack of infrastructure to receive them and a large overcrowding in their number at the level of Moroccan medical schools.

The psychology expert added that the responsible authorities should intervene, especially the ministries of health and higher education, since they are in charge of this sector, in order to find a solution in the integration of students, considering it an opportunity to correct some gaps in the infrastructure of university hospitals.

He pointed out that these problems lead to the existence of approaches, the first of which is represented in a “point approach”, which is that these students are Moroccan and live more or less the same situation, since they will enter an “unhealthy” situation. , while there must be a preparation of government authorities for crises and the development of the quality of education, especially in the Faculty of Medicine.

He pointed out that there are guarantees from the Government after the declarations of the Ministries of Health and Higher Education, in which the Minister of Education highlighted the process of integration in the Moroccan university, despite the concern of the students, underlining the need for a psychological support to face the risks, pointing out that “what is dangerous is the lack of response and orientation with that concern is to find solutions, which is what produces some of the disorders in these people”.

The psychology expert concluded that it can be said that “they are competencies to adapt to circumstances, and this competency must be developed by the human being, and is not subject to psychological vibrations, given that the situation, whatever its nature, it requires a period of time to have a solution, agreements and decisions, which is what emphasizes the need for a person to have the strength to endure.

And adds Benzakour, these students must enter into negotiations with the competent authorities, because they are not ordinary people, given that they are students and have a scientific degree, and occupy an important position, which confirms that this incident should not constitute a psychological fragility. for them, and it requires strength to defend their rights. Note that Morocco has not neglected its students in Ukraine, which is a great guarantee for them.