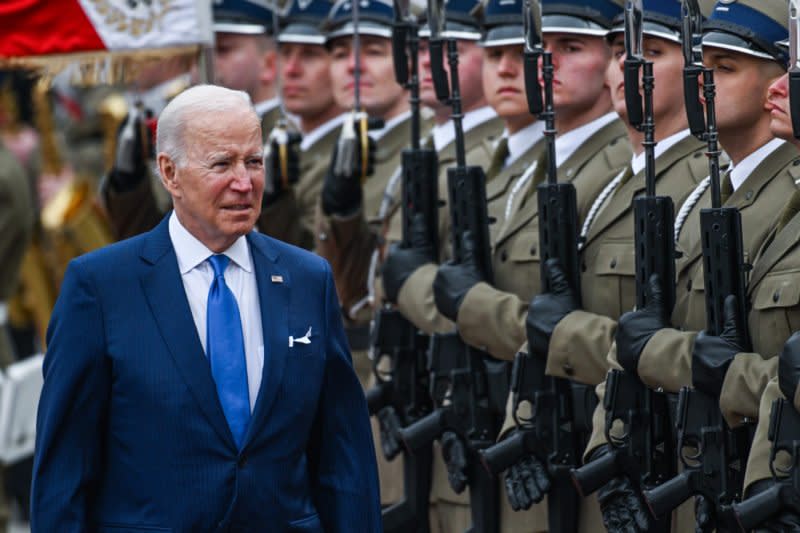 US President Joe Biden has openly questioned Russian President Vladimir Putin’s rule over the Ukraine war. “For God’s sake, this man cannot stay in power,” Biden said in a speech in Poland on Saturday. Shortly before, Russian missiles hit the western Ukrainian city of Lviv, also known as Lemberg, just about 80 kilometers from the Polish border.

The Lviv military administration reported three violent explosions. A thick column of black smoke could be seen in the sky. A fuel depot was attacked, Mayor Andriy Sadowyj said. He spoke of five victims without giving details. Civilian infrastructure was not affected. It is the closest Ukrainian city to the NATO country Poland. So far, it has experienced few attacks. 200,000 refugees are staying there.

A strong sentence – and half a denial

A little later, in Warsaw, US President Biden bristled in what was billed as a historic speech in front of around 1,000 guests. He not only reiterated NATO’s promise of assistance to the 30 alliance partners and told Putin: “Don’t even think about taking action against one centimeter of NATO territory.”

Biden also directly appealed to the people of Russia to distance themselves from the war against Ukraine. “You, the Russian people, are not our enemy,” Biden said. But war is not worth it. He referred to attacks against civilians.

Biden mentioned Putin by name several times, sometimes simply referring to him as a “dictator.” The speech finally culminated in the statement that this man must not remain in power. However, the White House immediately tried to put the statement in perspective. A US official said Biden said Putin should not wield power over neighbors or the region.

Biden also promised more support for Ukraine and thanked Poland for taking in the many refugees. According to official figures, almost 2.3 million people have already arrived there. Around 260,000 were officially registered in Germany.

Putin launched an attack on Ukraine on February 24. Russian troops now have parts of the neighboring country to the north, east and south under control. However, the Ukrainian armed forces are putting up resistance and are probably pushing back some Russian troops, for example, in the city of Cherson in southern Ukraine and in the vicinity of kyiv.

However, the Chief of Staff of the Ukrainian Army, Olexander Grusewitsch, warned that a Russian attack on the capital was still possible, as Russia was massing strong forces there.

The British Ministry of Defense said on Twitter that Russian attacks on major Ukrainian cities such as Kharkiv, Chernihiv and Mariupol continued. Russia relies “on the indiscriminate use of aerial and artillery bombardment to try to demoralize the defense forces.”

The information provided by the warring parties can hardly be independently verified. However, both sides unanimously reported clashes around Mariupol. The Russian army is shelling civilian and military targets from the air and with artillery, the Ukrainian general staff said. On the Russian side, Chechen leader Ramzan Kadyrov posted videos about the alleged deployment of his fighters in Mariupol.

The city, which once had more than 400,000 inhabitants, has been severely damaged by fighting since early March. France, along with Turkey and Greece, is considering a rescue operation for the besieged civilian population. According to Ukrainian sources, ten humanitarian corridors have been established in other conflict areas to allow civilians to flee, for example, in the outskirts of kyiv and in the eastern Ukraine region of Lugansk.

The Russian Defense Ministry announced in Moscow that an arms depot near the city of Zhytomyr had been destroyed by “Caliber” rockets from a warship in the Black Sea. Ukraine had previously confirmed that several Russian cruise missiles had also been fired at the Ukrainian Air Force headquarters in Vinnytsia in the west of the country.

At a summit meeting in Brussels, NATO and the European Union attempted to find a unified response to Russia’s war of aggression. However, the EU was unable to reach an agreement on an immediate ban on gas, oil or coal imports from Russia on Friday, also due to resistance from the federal government, which fears dramatic economic damage at home.

CDU foreign politician Norbert Röttgen expressed the expectation that the federal government will give in soon. “The German position of continuing to buy gas and oil from Russia will not last,” Röttgen told the “Augsburger Allgemeine” on Saturday.

An internal political debate is also taking place over German arms deliveries to Ukraine. Defense Minister Christine Lambrecht, who belongs to the SPD, rejected the accusations in an interview with the editorial network Germany that these deliveries had come too late or were going slowly. In Germany there were again demonstrations against the Russian war of aggression, for example in Hamburg and Munich.