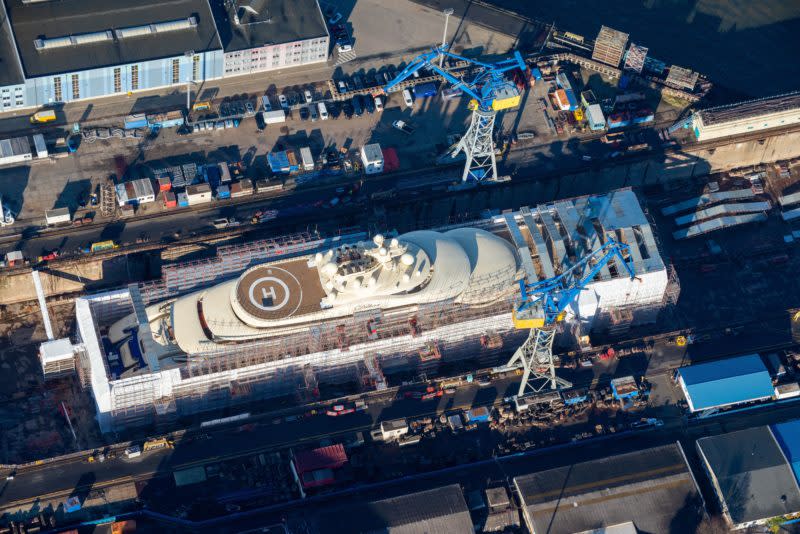 Alisher Usmanov is not just any Russian oligarch, but one of the ten richest Russians: the American media outlet “Forbes” estimates his fortune at 12.8 billion US dollars. His lifestyle is correspondingly pompous.

In addition to three luxurious villas on Lake Tegernsee, Usmanow also owns a boat that has been featured often in the media since its owner was sanctioned: the “Dilbar”. Its value is said to be $800 million.

The “Dilbar” is 156 meters long, on the yacht there are entertainment and recreation areas, two helipads and a 25-meter-long swimming pool with a capacity of 180 cubic meters. “The largest swimming pool ever installed on a yacht,” writes the German shipyard Lürssen based in the Hanseatic city of Bremen on its website.

And Lürssen should know. The shipyard has specialized in the manufacture of 60-meter yachts and warships and, among other things, also built the “Dilbar” and delivered it in 2016. And not only that, the yachts “Graceful” and “Nord”, which are said to belong to Russian President Putin himself and Tui’s former majority shareholder, Alexey Mordashow, were also made by Lürssen or a subsidiary of the company. These two yacht owners were also sanctioned by the EU.

At Lürssen’s subsidiary, Blohm + Voss, three yachts belonging to Russian oligarchs are currently in the shipyard for overhaul. Usmanov’s “Dilbar”, as well as the “Luna”, the Farkhad Akhmedov and the “Solandge”, which are said to belong to Suleiman Kerimov. In short: Lürssen’s shipyard and ships are popular with Russian oligarchs.

“Made in Germany counts in yacht building,” says Heiko Messerschmidt from IG Metall’s coastal district management. 12 of the 20 largest yachts were built in Germany. According to him, this is due to the good quality and the name that German shipyards, including Lürssen, have built in recent years.

The lack of Russian customers could become a problem for shipyards

But now at least the Russian clients are no longer available due to the imposed sanctions. Messerschmidt says it is difficult to estimate exactly what impact the sanctions would have on yacht building, which is important for German shipping companies. “However, it is obvious that with Russian customers a significant customer base will be lost, at least for the time being.” When asked by Business Insider, Lürssen declined to comment on the consequences of the sanctions on his own business.

The company was founded in 1875 by 24-year-old Friedrich Lürßen, although he actually had other plans. After completing his training as a shipbuilder, Lürßen wanted to work in his father’s existing shipyard. However, he advised her to found her own shipyard, since a single company would not have been enough to feed two families, the Lürssen company writes about itself on his website.

From racing rowboats to luxury yachts

In the early years, the newly founded shipyard initially only built racing rowboats, until Lürssen built the world’s first motor boat in 1886. It was commissioned by Gottlieb Daimler, who developed the first four-wheeler with a combustion engine. together with Wilhelm Maybach.

50 years after its foundation, the shipyard built its 10,000. Barco, a 14 meter wooden motor yacht. In the following decades, larger and more pompous ships followed, such as the 71-meter-long yacht Carinthia VI in 1971. Especially from the year 2000, Lürssen grew strongly through various acquisitions.

In 2004, the company acquired Neue Jadewerft, which specializes in warships, among other things. In 2012 Lürssen took over the Norder shipyard, in 2013 the Peene shipyard and in 2016 finally the Hamburg Blohm + Voss shipyard, which specializes in yacht refit activities, i.e. yacht conversion. According to Radio Bremen’s magazine “Buten un Binnen”, Lürssen now employs 2,800 people, with 1,000 added by the acquisition of Blohm + Voss alone. The family business is run in the fourth generation by Peter and Friedrich Lürßen and has locations in Bremen, Aumund, Wilhelmshaven, Rendsburg, Bern, Wolgast and Hamburg.

And there, in Hamburg, Usmanow’s “Dilbar” will probably remain at Blohm + Voss for quite some time. Due to the sanctions, Usmanov is not allowed to take his expensive vehicle out of the port. The yacht’s crew had to let Usmanov go due to the sanctions against him. The largest swimming pool ever installed on a yacht remains unused at the moment.

This article appeared on March 17 and has now been updated.