This is Marina Ovsyannikova, the woman who spoke out against Putin’s war on Russian television, and is now on trial. 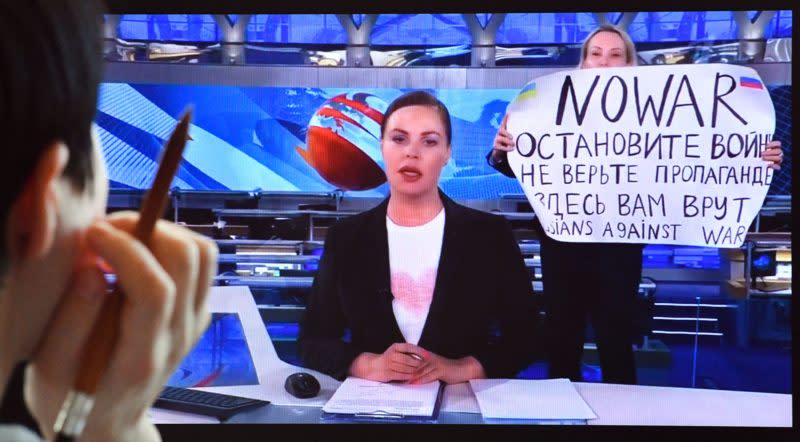 “Stop the war. Don’t believe the propaganda. They will lie to you here. The Russians are against the war.” With these phrases on a poster on Moscow state television, Marina Ovsyannikova rebelled against Russia’s war of aggression against Ukraine — On the biggest evening news show “Vremja,” she held the banner up to the camera and paced back and forth as anchorwoman Ekaterina Andreyeva spoke about Western sanctions.”No to war!” Ovsyannikova shouted before before the transmission was interrupted and another report was displayed.

The protest is an unprecedented event in the quasi-militarily regulated state television broadcasting with pro-Kremlin and highly paid propagandists. Since then, there has been no trace of the 44-year-old woman, who on Tuesday was celebrated internationally as a courageous heroine. According to information from the EU, she has disappeared. “Her lawyers cannot contact her,” said a spokesman for the EU’s chief diplomat, Josep Borrell. The protest is the latest example of a courageous stand that refutes the Kremlin’s lies and propaganda.

Kremlin spokesman Dmitri Peskov described the incident as “hooliganism” and that the station management had to deal with it. Even the state media couldn’t help but report on it. The importance of the “Wremja” program is comparable to that of the “Tagesschau” in Germany.

At first it was said that Owsjannikova was threatened with regulatory proceedings. The publisher and mother of two could also face prosecution under a new law that makes defamation by the Russian military a severe penalty. Anyone who tarnishes the reputation of the armed forces faces up to 15 years in prison in Russia. Calling Russia’s war in Ukraine a “war” is also a punishable offence. Officially there is only talk of a “special military action.”