This is Marina Ovsyannikova, the woman who spoke out against Putin’s war on Russian television and is now facing lengthy prison terms. 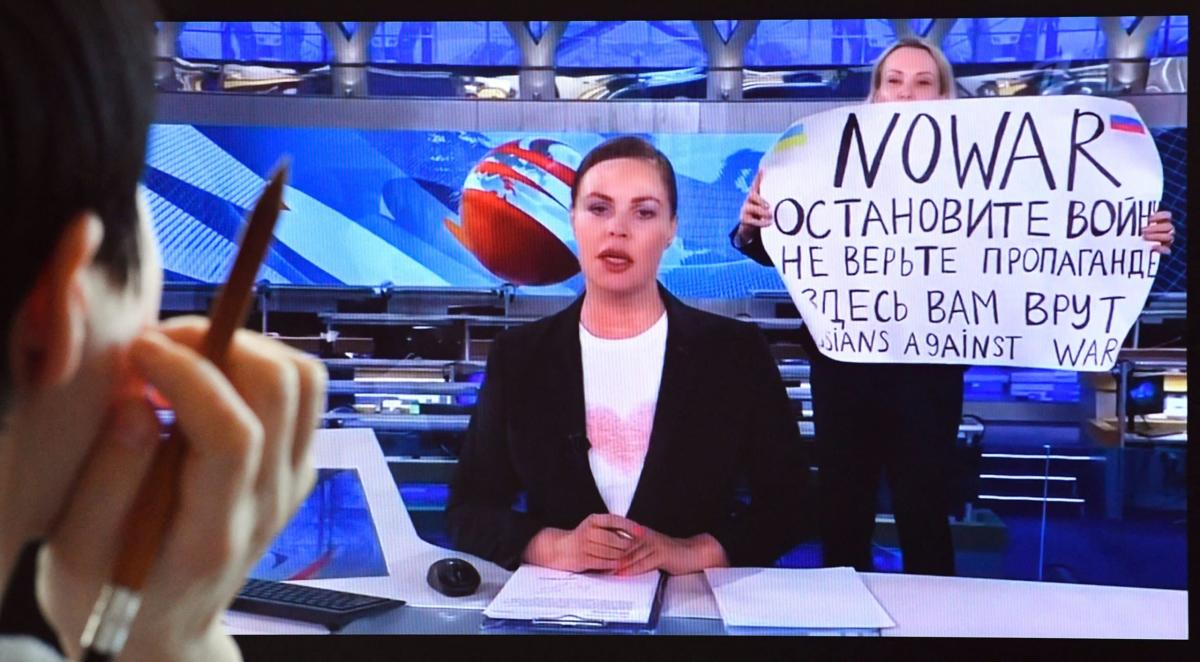 “Stop the war. Don’t believe the propaganda. They will lie to you here. The Russians are against the war.” With these phrases on a poster on Moscow state television, Marina Ovsyannikova rebelled against Russia’s war of aggression against Ukraine — On the major evening news show, “Vremya,” she held the banner up to the camera and paced back and forth as newscaster Ekaterina Andreeva spoke about Western sanctions.”No to war!” Ovsyannikova yelled. before the transmission was interrupted and another report was displayed.

The protest is an unprecedented event in the quasi-militarily regulated state television broadcasting with pro-Kremlin and highly paid propagandists. Since then, there has been no trace of the 44-year-old woman, who on Tuesday was celebrated internationally as a courageous heroine. According to information from the EU, she has disappeared. “Your lawyers cannot contact you,” said a spokesman for EU diplomat Josep Borrell. The protest is the latest example of a courageous stand that refutes the Kremlin’s lies and propaganda.

Kremlin spokesman Dmitri Peskov described the incident as “hooliganism” and that the station management had to deal with it. Even the state media couldn’t help but report on it. The importance of the “Wremja” program is comparable to that of the “Tagesschau” in Germany.

Initially it was said that Owssjannikova was threatened with due process. The publisher and mother of two could also face prosecution under a new law that makes defamation by the Russian military a severe penalty. Anyone who tarnishes the reputation of the armed forces faces up to 15 years in prison in Russia. Calling Russia’s war in Ukraine a “war” is also a punishable offence. Officially there is only talk of a “special military action.”

Owssjannikova had recorded a video before the television appearance, which was quickly released after the action. In it, the station employee says that she is ashamed of having broadcast Kremlin propaganda for years. “What is happening in Ukraine is a crime.” Only Russian President Vladimir Putin is responsible for the aggression. He called on his compatriots to protest against the war. “It’s up to us to put an end to all this madness.” The state cannot lock up everyone.

Ovsyannikova, who wears a necklace in the colors of the Russian and Ukrainian flags in the video, says she is the daughter of a Ukrainian father and a Russian mother, “and they were never enemies.” “This chain around my neck is like a symbol that Russia must stop the fratricidal war immediately and that our brother peoples can still reconcile.”

Navalny’s team announced that it would support the TV publisher. Mann wanted to take on any sanctions that might be imposed on him, Maria Pewtschich of Navalny’s team wrote on Twitter on Tuesday. Russian journalists are not allowed to talk about war, but only about a “special military operation”. There was still hope that he could just keep a fine.