This is how Seville educates tourists to promote coexistence with their neighbours: “Don’t shop on the balconies. use the roofs” 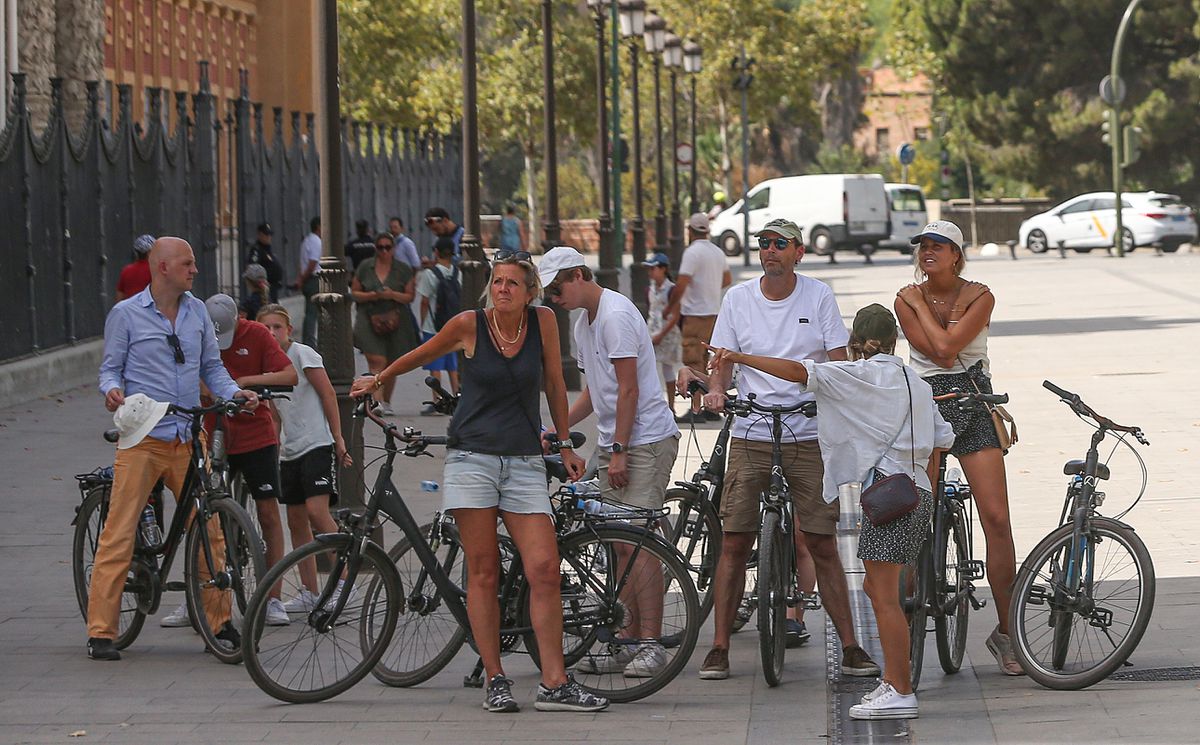 “At least tonight, the only thing that bothered us was the heat, not the noise from the tourist apartments.” Manuela Gámez, a resident of Calle Céspedes in Sevill’s Santa Cruz neighborhood, tells a clerk at a local supermarket that she hasn’t slept in several days . Not because the high temperatures kept them from sleeping, but because the tenants of one of the tourist apartments on their block arrived very late at night and then started talking very loudly until the early hours of the morning. “Here we all open the balconies and windows to let the air circulate, not for the calls to circulate, but they may think it’s just tourists, not residents,” he comments.

Untimely noise, premature parties, rubbish bags thrown everywhere, but also the endless queues of visitors who follow the explanations that the guides start over loudspeakers, or who leave badly parked the bikes or scooters on which they move through the city . These are just some of the complaints that have become a constant in the old town neighborhoods of the Andalusian capital, which, like most tourist cities in Spain and Europe, is struggling to attract visitors trying not to alienate their own neighbors. To this end, the Seville City Council launched the campaign Dear Seville Back with which it intends to enlighten tourists by explaining the basic rules to promote coexistence with the residents.

The recommendations are contained in a package that the owners of the houses and tourist apartments distribute to their tenants. They are very basic and simple rules: “Use the best dryer. Don’t keep your clothes on the balconies, it looks terrible. We usually dry it on the roof. If you don’t have one, ask your landlord to give you a portable clothesline”; or “Keep your private parts private. Don’t pour anything on the sidewalk that you wouldn’t pour on the floor of your house. If you need to go to the bathroom, use a toilet or you will be fined.”

The measure was very well received by the neighbours, the owners of the tourist apartments and the tour guides who helped design the campaign and sent their complaints and suggestions. “It is a decalogue of good practices to improve coexistence and make the neighborhood more sustainable, because on many occasions tourists fail to do so, not out of rudeness but out of ignorance,” says María José del Rey, president of the Neighborhood Association of the Santa Cruz neighborhood .

Although the City Council will continue to follow up municipal services and local police, all stakeholders are in favor of avoiding the expedited route and avoiding immediate sanctioning, “at least while the initiative begins implementation,” he stresses. Gustavo Medina, President of the Association of Tourism Businesses of Seville, who for the time being distances himself from initiatives less tolerant of rude tourists such as AVVAPro ).

While the City Council of Malaga and the hoteliers are looking for solutions to meet the demands of the Old Town Neighborhood Association, among others, to exercise their right to rest, AVVAPro has started to install noise meters and the service of a night porter in the tourist accommodations. According to the establishment’s president, Carlos Pérez-Lanzac, the aim is to “put an end to any problem of coexistence that the guests could create” for the neighbors themselves.

The system compares the noise patterns in a home and identifies the noises that can be disruptive. If they occur, a notice will be sent to both the homeowner and the tenant. And if the noise doesn’t stop, a concierge will go to the tourist apartment before notifying the police if necessary. Of course, only a thousand of the nearly 8,000 accommodations of this type that exist in the capital, Malaga, currently have this system. While solutions are being tested, the social networks of the Malaga Neighborhood Association present a walk through the Museum of Horrors between bachelor parties, huge terraces and screams at every hour of the morning.

If there’s one city that’s doggedly fighting to prevent tourists from taking over some neighborhoods, especially those in the center, it’s Barcelona. His city council has tried, from whistleblowers asking for quiet in areas where free time is concentrated, to a police presence that doesn’t always work. In the end, the team led by Ada Colau decided to try to change visitor behavior through sanctions and regulations, and is working on a decree for the Ciutat Vella district that limits the number of people in guided groups to 15 and guides the wearing of Loudspeakers are banned and traffic instructions are imposed to regulate the flow of tourists through the streets.

The first two measures are already mandatory for the tourist guides of Seville, who are included in the tourist guide table of the locality, who are obliged to transmit their comments through audio circuits and not through loudspeakers or other public address systems, and who cannot guide groups of 30 people or more . “These are binding regulations for us, which we have sent to all domestic and foreign travel agencies and tour operators. The problem is the leaders who are outside the official circle,” says Cristina González, one of the table’s speakers.

LoveSevillaBack is part of one of the three lines of action of the Seville City Council to order and rationalize the excessive spread of tourism in order to limit the uncontrolled growth of tourist housing – in the Andalusian capital there are 225 tourist housing with a capacity for 7,140 people and 7,297 houses for tourism purposes, which can accommodate 35,633 visitors – avoiding the eviction of neighbors from downtown areas. “We are trying to stop wrongdoing so as not to encourage the Sevillians’ aversion to tourists,” emphasizes Mayor Antonio Muñoz.

In order to put an end to the proliferation of tourist housing, the Consistory has modified its urban development plan to standardize this type of housing with the rest of the hotel establishments, becoming the first Andalusian city to complete this process and finalize the regulation. Malaga seems ready to follow a similar path and is working on a regulation that will regulate the supply of holiday homes. “There are many tourist homes, we don’t want to grow any more,” the mayor, Francisco de la Torre, clarified a few weeks ago.

Open the debate on tourist taxation

But it is precisely in the last pillar that Sevilla wants to fight. Its mayor has opened the debate on imposing a tourist tax on visitors, following in the footsteps of Catalonia and the Balearic Islands, the only autonomous communities to have approved this tax. “Now is the time for tourism taxation,” defends Muñoz, who hopes the committee’s new tourism minister will be open-minded and rule in favor of the tax measure. “It doesn’t mean that it should be mandatory for all cities, whoever wants to create it and who doesn’t, doesn’t do it,” says the Seville City Council, aware that this initiative is viewed with suspicion by Costa del businessmen becomes Sol whom they fear that tour operators will launch themselves in other countries.

“It would be a way for citizens to verify that not only hoteliers, travel agencies or tour guides benefit from tourism because the money raised could be used to rehabilitate areas in their neighborhoods or improve public services,” says Munoz. Sevillian businesspeople in the sector, Medina points out, are positive but expect more precision and transparency about who would collect that fee and where it would be allocated. Muñoz is ready to fight this fight and has communicated it to Finance Minister María Jesús Montero, who could also facilitate it by amending the local finance law. “The Mayors of Granada, Malaga and Valencia” agree.

As taxation arrives, it’s the turn of tourists to educate them to conform to the customs of the cities they visit. In Seville, the friendly way has been chosen, indicating where to lie down, relieve yourself, smoke or park; in Malaga with noise meters and some sort of modern security guard. In Barcelona they tried everything. And continue…