This is how one imagines sustainable cities 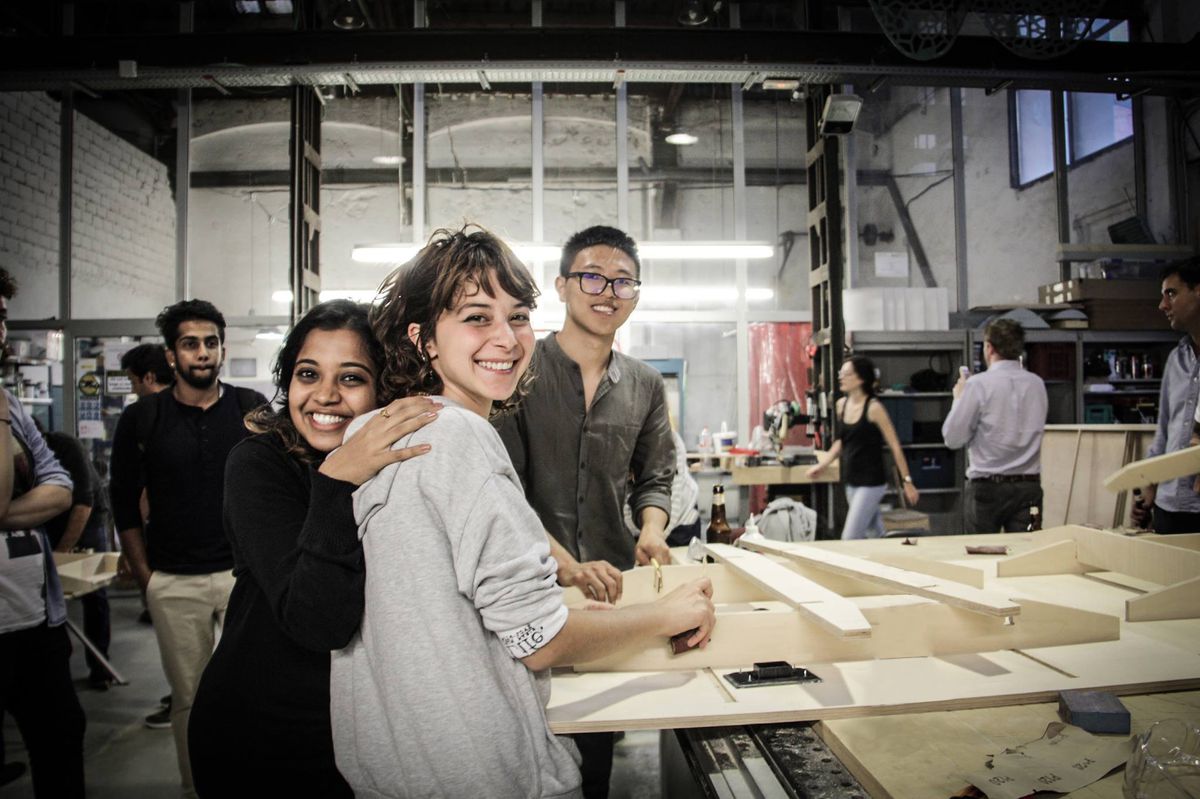 Carbon footprint, waste management, densification, energy efficiency, renewable materials… One cannot speak of sustainable development without thinking about the city model that we need for urban environments to grow with the least possible impact on the environment and to use natural resources . Some of the conversation has been entrenched in public discourse for years and social awareness is growing, but broader and cross-sectoral changes are needed to transform the way we live and build. An idea that is right at the heart of the educational and research work of the Institute of Advanced Architecture of Catalonia (IAAC).

Since then and inspired by the culture Manufacturer, Technology and experimentation went hand in hand in each of the 11 master’s programs taught by the institution, driving trends and conversations and experimenting with ancient and innovative techniques: Advanced Architecture; Ecological buildings and biocities; New designs; Robotics and advanced manufacturing… When the IAAC opened its doors in the Poble Nou neighborhood more than two decades ago, they were talking about digital design and manufacturing when nobody else was; its first prototype from 2001 already used the Internet of Things; and more than a decade ago efforts turned towards ecology, wood and sustainable building. The institution has agreements with the UPC and the US MIT Center for Bits and Atoms, among others, and its manufacturing laboratories (Fab Labs) are part of a network of more than 2,000 similar facilities around the world.

“The IAAC was quite a pioneer when it came to identifying trends that will shape the future of cities, of the way we live and of the materials we will build with,” says Daniel Ibáñez, new director of an institution that is based in aims to increase the national presence of a school whose pupils are mainly foreign (96-97%) in the coming years. Today there is no doubt that we need to change the way we plan and build to meet climate, economic and social challenges. and that necessarily implies much more information. “We work a lot with data: when we start building a self-sufficient building, when we don’t have data about the context, the environment, how the sun is moving, where it really makes sense to have windows or photovoltaic panels. .. When we start planning a neighborhood, it is impossible to do so without understanding the data on the local economy, mobility, environmental issues or waste management,” argues Areti Markopoulo, academic director of the IAAC. The Catalan institution devotes between 25 and 30% of its income to some type of grant.

Innovation in architecture does not always mean a leap forward. The answers to the social and environmental challenges we face may lie in the past, but also in the environment around us. Innovation can mean, for example, building with materials that have been used for centuries, such as wood or earth, and reinterpreting their use thanks to technological data and traditional techniques from all over the world. “Why build with wood?” asks Ibáñez: “The central theme is the environment. A building made of concrete is a source of emissions, another made of wood is a sink for them. The first requires 1,200 degree ovens, which requires a lot of energy; while the second is a deposit of all the carbon that the tree absorbs as it grows and which is fixed in the wood, where it remains for 100 or 200 years.” The innovation lies in the use of cross-laminated timber (or CLT, for its English acronym), something that, he adds, “is revolutionizing the construction sector because it allows load-bearing facades to be made instead of load-bearing walls and floors.” In 2021 they presented mass of wooda national network of experts, companies and organizations to promote industrialized solid wood construction.

Valldaura Labs is the IAAC headquarters in the Collserola Natural Park on the outskirts of Barcelona. There, the Master’s degree in Advanced Ecological Buildings and Biocities (MAEBB) is taught, a comprehensive program in an old restored farmhouse that houses students who are trained throughout the year to understand how to construct ecological buildings. collect solar and heat data; Carbon footprints in relation to the materiality of the building… and many other aspects related to the issue of climate change. Each year, the students also spend the final months making a 1:1 scale prototype: they not only design it, they define it, execute it, assemble it and experience it; Using local materials and wood from the adjacent forest, which they use according to a sustainable forest management plan. Is it now conceivable to continue growing without concrete? Not quite, Markopoulo explains: “It’s a material that is still necessary, but its protection has to be reduced and it has to be combined with other materials.”

Projects like the forest observation tower that this year’s students are building; the tiny house (2019), a small self-sufficient house capable of generating its own energy, in which students experimented, for example, with flat geometry inside and more complex shapes outside; the house quarantine (2020) and the solar greenhouse (2021). “There’s a beautiful idea of ​​going back to nature to learn things we’d forgotten: when a tree is felled, how a forest is managed so as not to kill it; What can you do with the resin of a tree, with its fibres… We are talking about circular bioeconomy,” explains Vicent Guallart, director of Valldaura Labs.

It should not be forgotten that sustainability also has a human and social facet. Daniel Sorial, a 27-year-old student from Egypt, chose the Master of Advanced Architecture because it gives him an overview of the different disciplines and how they relate to architecture and gives him the opportunity to design and pursue a wide range of interests. “But also because it enabled me to investigate the relationship between neuroscience and architecture and how spaces affect the cognitive-emotional behavior of users.” Some of the projects developed here by the students aim to rethink the densification of cities; or to address the nature of self-sufficient buildings, where they function in extreme weather emergency scenarios: for example, a building that can change its roof to collect water, or that has photovoltaic panels to collect solar energy.

Innovation in the DNA

Digital fabrication, 3D printing, drones, experimentation with new materials… “When we talked about digital fabrication 20 years ago, hardly anyone knew about it, but today it’s relatively widespread,” recalls Ibáñez. But what is it made of? “Basically you give the machine a completely digital geometry, something that you drew on the computer; the program translates it and then moves a drill according to the design you created”. Although 3D printing is a common technology in other fields, its use in construction is entirely new and there are few prototypes proving its feasibility. One of them is the 3D house, a small one-room house built in Valldaura with earth and thanks to this technology.

“Up until 50 years ago, half of the world’s population still lived in mud houses. And only 10 years ago, for pollution and sustainability reasons, we realized that it was a very good building material,” says Edouard Cabay, co-director of the postgraduate course in 3D printing architecture. “Earth is an interesting material because it didn’t take energy to turn it into a building material; it is 100% natural and non-toxic and requires no transportation. Of course, there are also some disadvantages, such as lower water resistance. But if you design it well, these aspects don’t necessarily make it a bad building,” he argues. “Because it is such an ancient material, communities around the world have developed ways for centuries to make a mud building perform well in its physical, climatic and social environment.”

However, printing a building with earth is a new avenue where the pioneers lack references. “In everything we do, we encounter many small problems and we have to invent solutions. Therefore, instead of reinventing everything, there is an important research and documentation work,” explains Cabay. 3D printing also serves to create prototypes quickly and easily, while in other disciplines the prototype represents a significant cost factor. “And when you remove the 3D printed component, it’s a type of construction that’s already being done in some ways in developing countries, especially in desert climates where water isn’t typically an issue,” says Ibáñez.

“What we’re working on at IAAC is how automation and robotics can allow us to build with the experience of humans and local artisans,” says Markopoulo. “Previously, the cost of a facade where each panel was different and had its own orientation was very high. But we have seen that when making a facade from panels, it is interesting that it follows the movement of the sun in order to achieve maximum indoor comfort. And we are also experimenting with air (drones) and ground robots (Rover), which can also scan environments and extract data.

All these uses have practical and immediate uses: if you are remodeling a building, for example, you fly the drone and you can carry out a precise scan, but not only the shapes, but also at a thermal level, to know where it is hotter and where it is colder . It’s a type of technology that can be applied on multiple levels, from a simple building to the Collserola Valley itself, where they have a robotic farming project that allows them to see the condition of crops and monitor a large space around find the best places for each type of farming or measure soil quality.

Previous articleAlgeria, Nigeria and Niger agree to build a gas pipeline across the Sahara
Next articleDavid Martín Sánchez: “Roma society is the most anti-capitalist in Europe”