This is how Andalusia has turned: The right has been growing for years, especially in slums 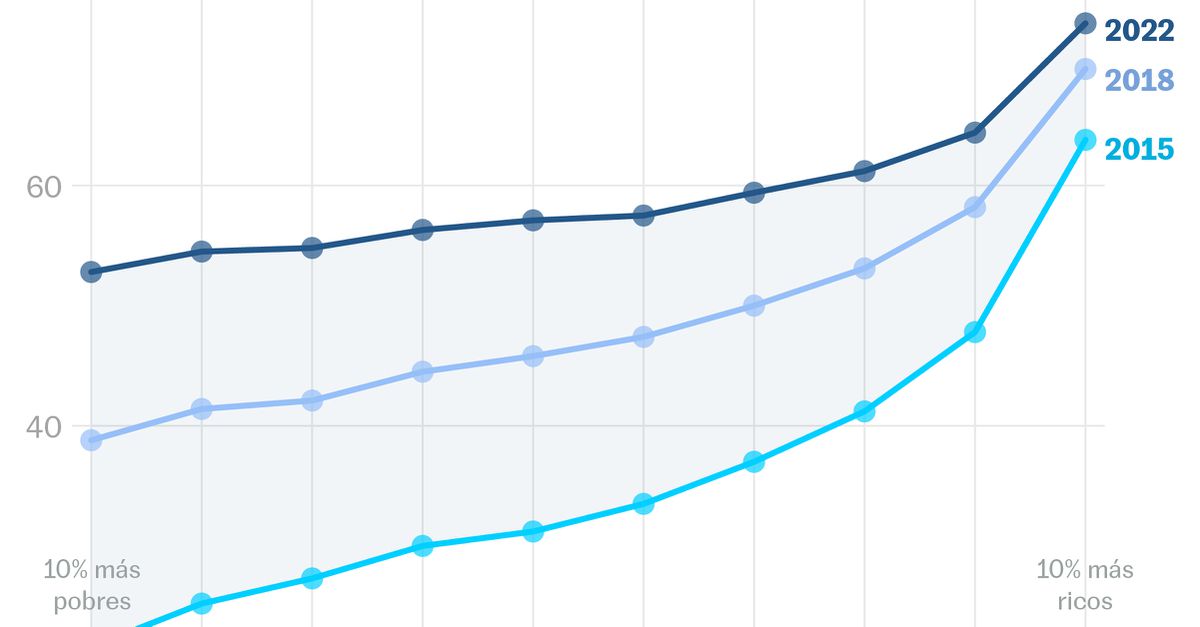 In seven years, the rights in Andalusia has made a huge leap: from 38% in 2015 to 60% in 2022. Their progress was across almost every town and city. However, a closer look at street-by-street polls reveals some interesting patterns. Are these:

1. The right has grown much more in the poorest neighborhoods of Andalusia

The sum of PP, Vox and Ciudadanos has doubled their votes in the poorest parts of Andalucia, from 20% to 50% since 2015. On the other hand, it has barely risen in the wealthiest neighborhoods, where it was already strong.

The right sum’s income profile is much more transversal than it was in 2015. Back then it had triple support in the richest neighborhoods compared to the poorest, but now it’s barely rising 40% from each other. The transformation started in 2018 and was consolidated in 2022.

In a way, it’s natural for the right to grow more in slums because it’s had more room to grow there. But the phenomenon is relevant. First, because it demonstrates the right’s ability to invade neighborhoods that were fiefdoms of the left. And secondly, because there is one more element to consider…

2. The right has also grown more in slums when they were not on the left

Imagine two neighborhoods that voted equally to the left in 2015, if one is poorer than the other, that’s probably where the right has risen the most. This is illustrated in the chart below, which shows the rise of the right between 2015 and 2022 in each census bin, broken down by whether they were more or less left in 2015 and by whether they were more or less wealthy. For example, if we look at the third column (the neighborhoods where the left had reached 70-80% in 2015), we see that the poorer the neighborhood, the more votes the right received. In those left quarters, when they were very poor, it went up 33 points, while in the rich it only went up 21. And this pattern repeats itself over and over again.

Another example is the neighborhoods where the votes were distributed and the right took about 40-50% of the votes, which corresponds to about 1,000 sections. Among them there are 50, among the richest in Andalusia, and there the rights rose by 14 points on average; in contrast, in the 40, who are among the poorest, the right rose by 25 points.

3. The right has also grown in neighborhoods where fewer students live

No wonder, since income and level of education always go hand in hand, especially when we look at the neighborhoods. Once again we see that the right becomes transversal where it was not: in 2015 the sum of PP and Ciudadanos reached 63% in neighborhoods with more than 35% students, while not exceeding 22% where they were less than 3%. These percentages are now 73% and 51%.

4. The right has risen more in cities and small towns

5. This turn to the right was also facilitated by the abstention of the left

Andalucia’s realignment will have been partly driven by the absence of many left-wing voters. Little was voted on in 2018 and 2022, but the data also shows that this happened particularly in left-wing territories.

As the chart shows, turnout in left-wing neighborhoods plummeted from 62% to 47% between 2015 and 2022. In more right-wing parts of the city, on the other hand, it has not fallen, but has risen slightly.

6. But participation is not everything: Andalusians also declare themselves more right-wing than ever before in 30 years

In addition to the voting, the ideology with which the citizens of the region identify has also changed in these seven years. Today more than ever, men and women of all generations stand on the right. For example, women born around 1950 have gone from an ideological average of 4.7 (where 1 is the extreme left and 10 is the extreme right) to placing above 5.

All generations are turning to the right. Mean annual location on the left or right axis (on a scale where 1 is leftmost and 10 is rightmost) 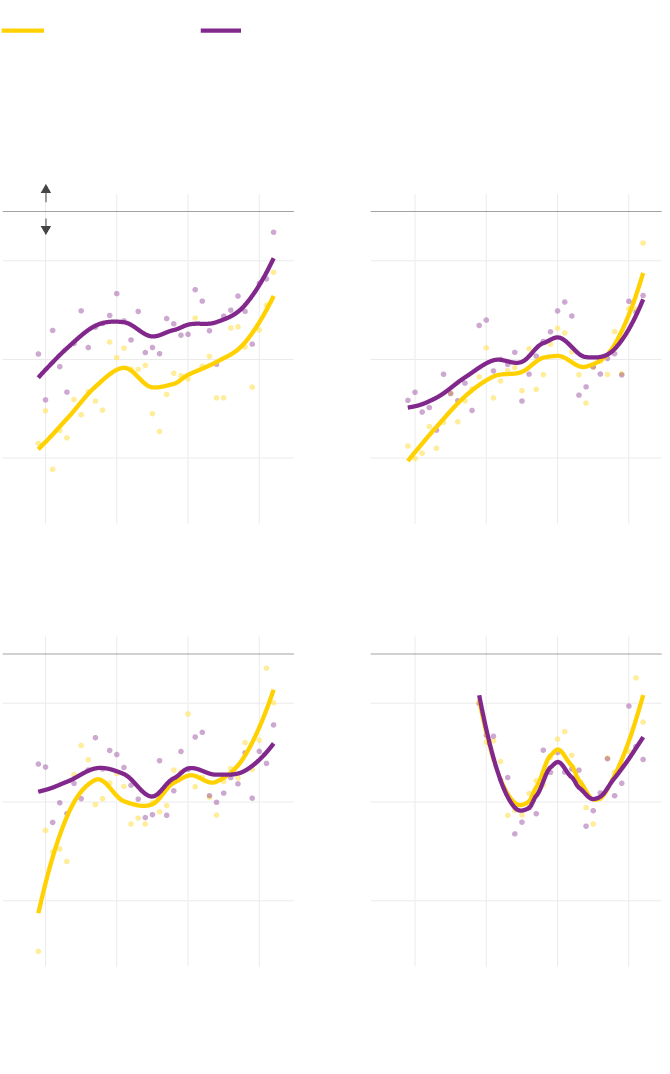 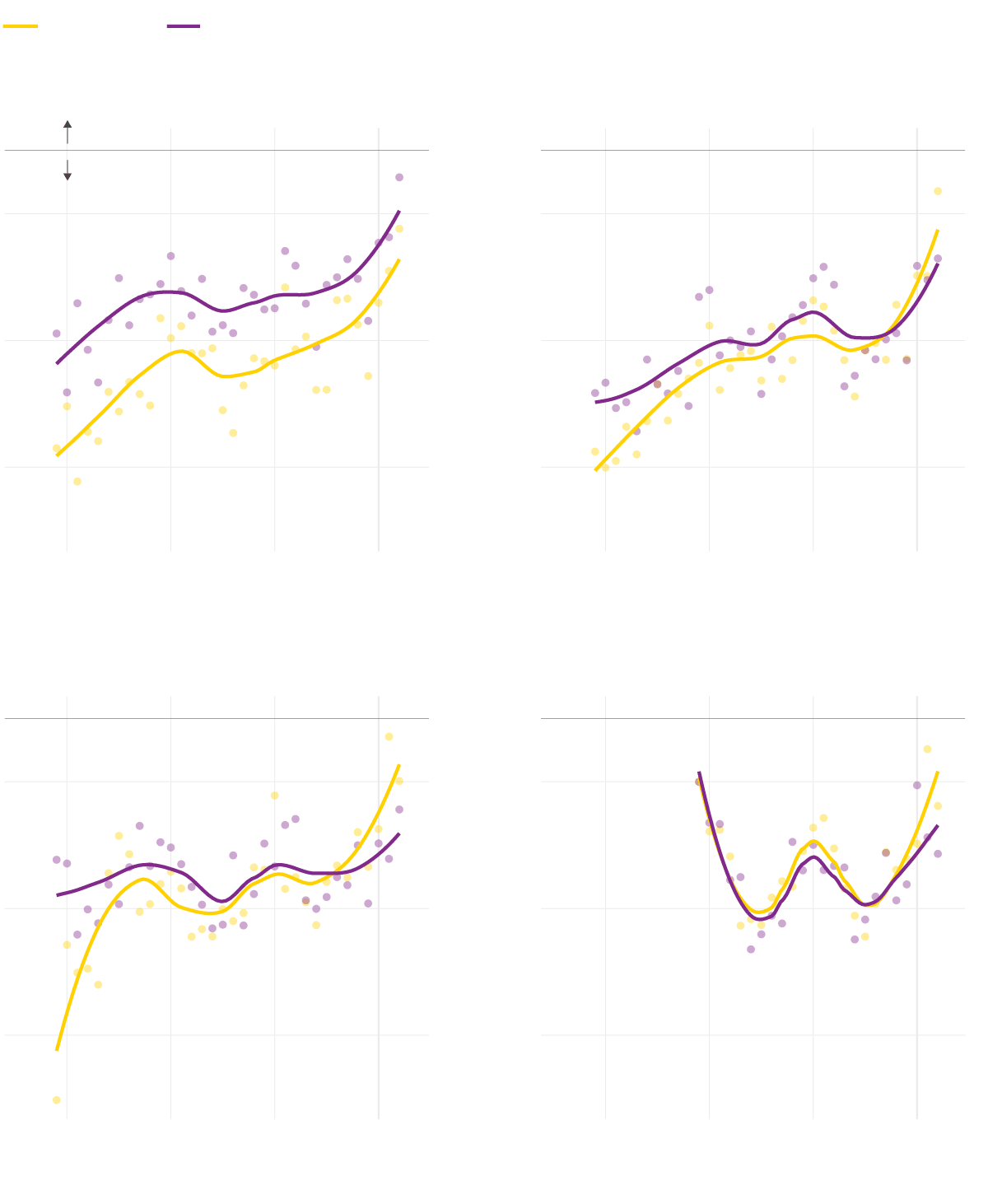 Since 2015, all generations born before 1990 have shifted to the right, this is what happened with the young transition years and their children who were born in the late 1970s or 1980s.

And it’s not an effect that comes with age – that people would do more right for as they get older – but that there really has been a new movement to the right. Almost all age groups, people between 35 and 50 or between 50 and 65, are more right-wing today than ever before.

All generations are turning to the right. Mean annual location on the left or right axis (on a scale where 1 is left-most and 10 is right-most)

Methodology. Reconciliation Data section come from the Junta de Andalucía. Census districts are administrative units of varying sizes that are home to approximately 1,000 people. Sometimes it is a single block and sometimes a larger area of ​​chalets or estates.

Regarding the CIS ideological location data, it should be noted that the center changed its methodology in 2020, and after that many barometers were conducted by phone instead of in person. Since then, more people have been in the ideological 1 and 10, at the extremes, which may have affected the middle positions as well. However, we calculated the average ideologies by removing these values ​​- 1 and 10 – and the development is almost identical: the right wing looks the same.

- Advertisement -
Share
Facebook
Twitter
Pinterest
WhatsApp
Previous articleThe new tunnel between Chamartín and Atocha will open on July 1st, but without any practical implications for AVE passengers
Next articleThe government is preparing a check for four million beneficiaries facing the blow of inflation