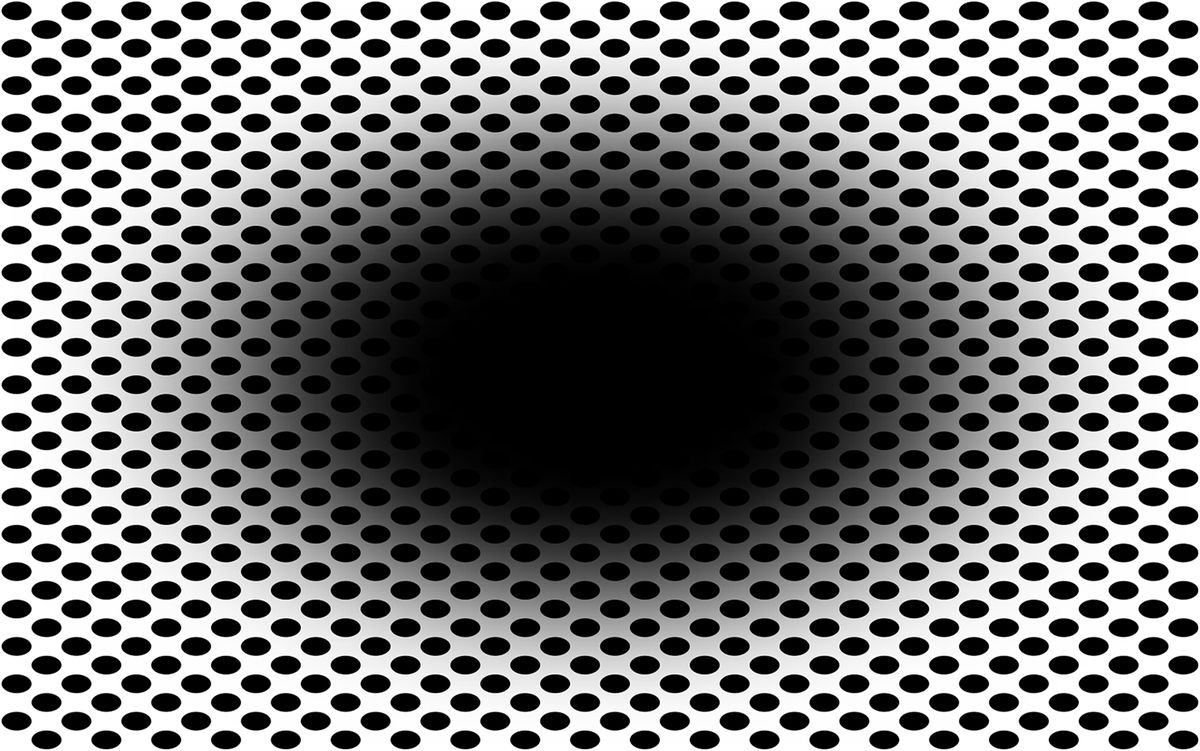 The image above does not move. The hole doesn’t get bigger, it doesn’t expand, and it doesn’t suddenly darken. It is an optical illusion and one of the protagonists of an investigation recently published in the journal Frontiers in human neuroscience. The experiment consisted in showing this image and others in the same style but with different colors, and the responses to these stimuli show that the human body responds to them, although they are not real images but illusory images . In this case, and through an eye tracker, scientists have shown how the pupils change when looking at these illusory images. If the hole is black, evoking greater darkness, the pupils dilate as if entering a dark room. In contrast, when the central hole is colored, including white, people’s pupils contract, suggesting an expansion of light. In the first case, the dilatation was monotonous, while in the case of the colored holes, the pupils initially contracted upon contact with the image, but later showed fewer changes. The subjective extents were also weaker compared to black holes.

Bruno Lang, Professor of Cognitive Neuropsychology at the University of Oslo and one of the authors of the study, defends that this adaptation is something “useful” as a form of preparation for something that is about to happen very soon. With that, she is “ready to act in the world.” Another conclusion these scientists have drawn is that human reality is not identical to the physical world. “We have to realize that we don’t know what’s out there. We don’t have a perfect picture of the physical world. Our mind gives us a version of it. And he does everything to create a working version that successfully interacts with the world,” he explains.

The experiment on which this research is based consisted of showing 26 static patterns with an elliptical central region on a dotted background, created by Akiyoshi Kitaoka, another of the researchers. The sample consisted of 50 normal-sighted participants from the University of Oslo. But not the entire population experiences these illusory movements. This was also reflected in the work: 20% of the participants saw little or very little expansion. Laeng explains that this happens all the time in illusions because not everyone interprets the images in the same way in this case. “One possibility is that you need to see this two-dimensional image as if it were a rendered three-dimensional image in order for the illusions to affect you and the pupil to dilate.” He explains this using the example of video calls where despite having a two-dimensional image is known that there is actually a three-dimensional image behind it. “When people do the same thing to our illusions, it creates this movement, this animation effect. I suspect that people who don’t experience this interpret it as a two-dimensional image and therefore there is no reason to be alarmed and to change anything.”

Ignacio Morgado Bernal, Professor Emeritus of Psychobiology at the Department of Neuroscience and Faculty of Psychology at the Autonomous University of Barcelona, ​​​​goes further and defends that even the same person, depending on the moment or the lighting, can or cannot see these illusions. “It probably takes a certain eye position to see it and, above all, a predisposition,” he elaborates.

Laeng explains that a very clear example of the different ways an image can be interpreted was a photo of a dress that went viral in early 2015. Society was divided between those who believed it was blue and black while the rest insisted what was white and gold. “This is another example that shows that what matters is how you start interpreting an image: you discover the characteristics of the scene and draw conclusions from them. Even when everyone is looking at the same thing, the brain builds very different things.” This image was analyzed and the results published in Current Biology. The authors suggest that these differences in color perception may be caused by the action of visual mechanisms used to stabilize color.

Scientists have been trying to decipher optical illusions for years. This term is defined as illusions, characterized by visually perceived images that deviate from objective reality, explains a 2011 study published in Japanese publication neuro-ophthalmology. “The problem with optical illusions, of which there are many, is that we rarely know the neuroscientific mechanism that makes them possible,” explains Morgado Bernal. These, as detailed, can be based on phenomena occurring in the retina itself, ie in the eye or in the brain, where there are many more complications.

But not only humans are able to see these optical illusions. According to a study published in , animals such as rhesus monkeys, cats or lions also have the perception of illusions of movement Nature a few months ago.