‘They mean a lot to a lot of people’: Anahí’s full presentation at Karol G’s concert is revealed 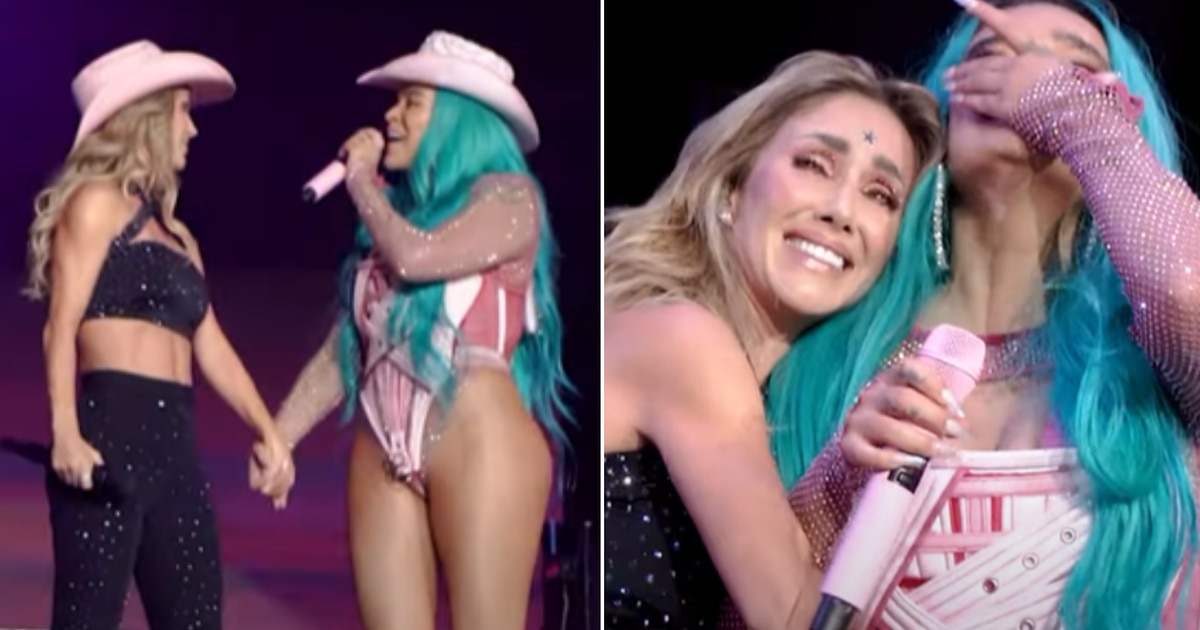 Carol G and Anahi they continue to dominate social media with the surprise presentation they made for the fans. And it is that no one expected the interpreter of “Bichota” to invite the former RBD to sing with her during the concert she offered at the Mexico.

The singers came together on stage to perform “Sálvame”, one of RBD’s hits that marked the career of Anahi. Although the actress also had already made a few small presentations, it was her return to the stage in front of a large audience after 11 years of absence.

Now, the official video of the presentation has been posted on the @anahichannelone channel on YouTube for the delight of the fans.

Far from being “just another presentation”, It was clear that the union of Anahí and Karol G ignited the nostalgia to the maximum and the followers of both, especially those who belonged to the “RBD generation”, never ceased to thank them for showing their brotherhood and devotion.

“It’s a unique, magical and unforgettable moment. I will never forget this day, it will always be in our hearts. The universe conspired. Thank you very much for this moment Anahi and Karol G”. “This presentation gave me 10 more years of life and hope to believe that one day we will meet again. I love you Anahí ️”. “They mean a lot to a lot of people.” “Really, there may be a thousand versions of the song Save me, but no one is going to sing this song like Anahi with that feeling that only she gives them and how this song gives us so much just by hearing her sing may the scene shake you have a moment we are all one”. “I’m crying because the reaction to seeing Anahí in the series shows how strong the RBD generation is!”, fans have spoken.

Anahí’s emotion continued to the max after her powerful presentation

“The day of the concert I came home and first, of course, with my husband, with my sister, with Jorge my brother-in-law, my mother, we were very excited and we watched the videos, we reviewed them and we reviewed them, and now later everyone went to bed and I… 5:30 in the morning and I kept going, but I couldn’t, I really couldn’t stop crying, it was something like hiccups, they have no idea. Then I got a message and it was from Karol and she said ‘I can’t sleep’ to me and ‘Oh my God, me neither,’ Anahí revealed.

“For the people who were at this concert, I don’t know if any of those people are here at this Direct, they have no idea what they’ve done for me, like way beyond yelling at an artist when they come on stage, which of course is wonderful, because for all artists that’s food, but it went way beyond that becauseI haven’t walked in so long and it ain’t my gig, it ain’t my stage, they ain’t gonna see me“, he added.

For Karol, having shared a show with Anahí was a dream come true.

“It’s a very emotional moment because I’m a super fan, super fan, super fan; and two, because she was very nervous because she hadn’t been on stage for 11 years,” said the Colombian. Later on Instagram, he posted a moving message which reads: “…It was amazing to see how despite years away, you still shine with such intensity. 11 years off stage, 11 years invitations you refused because you had other ideals and you accepted mine, LES MINS!