These countries are with Putin and these are their reasons 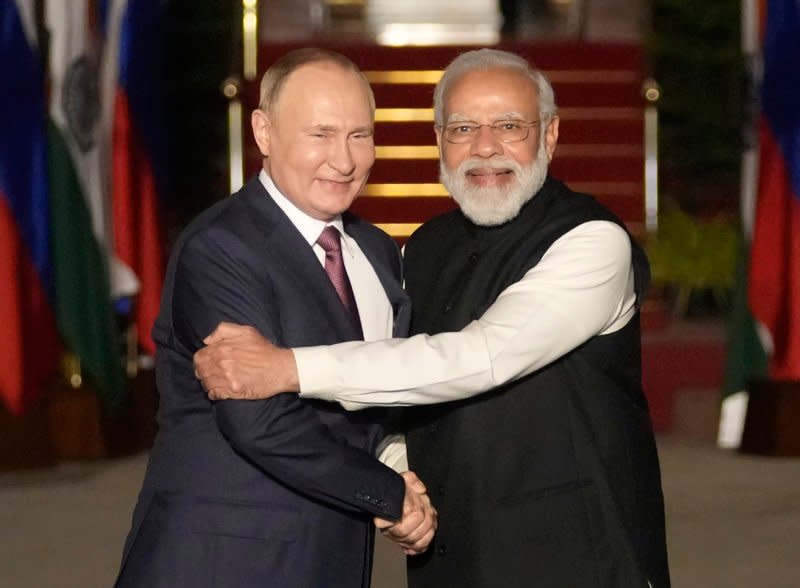 Russian President Vladimir Putin has attacked Ukraine. In response, the West stands behind Ukrainian President Volodymyr Zelenskyy and expresses its solidarity with Ukrainian citizens. Tough sanctions and more threats of sanctions from the West follow.

But appearances are deceiving. Several countries continue to maintain good relations with Russia and avoid distancing themselves from Putin’s actions. What nations are we talking about here and why? We give an overview.

China’s central role in the Ukraine war has come up again and again in recent weeks. Western countries expect Chinese President Xi Jinping to be a mediator, while Russia counts China as an ally. Ukraine also maintains a close trade relationship with China. Despite this, the government around Xi remained largely neutral and avoided criticizing Russia’s attack on Ukraine or distancing himself from Putin’s actions.

Just this week, the Xi government showed some color: The firing of rockets at Europe’s largest nuclear power plant, Zaporizhia, prompted the Chinese Foreign Ministry to call on the Russian military to “calm down and exercise moderation”. However, Chinese Foreign Minister Wang Yi reiterated that “the friendship between the two peoples” is solid as a rock.

Last month, Chinese leader Xi Jinping and Putin deliberately walked together at the opening ceremony of the Beijing Olympics. At the same time, they published a joint statement. In the statement, they not only strengthen their friendship, but also clearly reject an eastward expansion of NATO, which Putin says poses the greatest threat to Russia’s security.

They are also urging the West to move away from ‘Cold War concepts’. A clear message for Western countries and especially for the USA. Because several governments boycotted the Winter Games in Beijing due to China’s human rights violations – experts say that precisely this attitude of the Western countries Russia and China.

In addition, China and Russia last year extended their symbolic “neighborhood agreement”: according to Putin, they play a “stabilizing role” in world geopolitical events.

China and Russia sit on the UN Security Council and often take similar positions there, such as after the military coup in Myanmar, where delegates from both countries vetoed UN intervention. It was even more surprising that China abstained from the latest UN resolution against Russia’s attack on Ukraine, a sense of achievement for Western states hoping for China’s neutrality as a mediator.

One problem, however, is that China doesn’t think much of the West’s solution: sanctions are taboo for Xi, because China has long followed a foreign policy doctrine that no country should interfere in the internal affairs of another. state. Especially since China itself is affected by intact sanctions, triggered by human rights violations in its own country in the Xinjiang region, which is home to many people belonging to the Uyghur minority.

Thus, MP Gregor Gysi (left) warns against a closer alliance between Russia and China, triggered by Western sanctions. China is economically “much stronger than Russia,” and Russia is militarily superior. “If they really join forces, there will be a power factor that the democracies, the West, will not be able to control at all.”

Regarding the Ukraine war, India is pushing “for de-escalation, taking into account the legitimate security interests of all countries”, thus emphasizing India’s continued neutrality in the Ukraine war. The delegation also abstained from the UN resolution. Even after a 21-year-old Indian student was killed by a Russian missile on his way to the Kharkiv train station, the Indian government expressed “great concern” on Twitter, far from condemning Russian aggression. Why is India so consistently refraining from conflict?

The former Soviet Union and India already had a friendly relationship that lasted after the dissolution of the Soviet bloc and has intensified again, especially in recent years. Their association is based in particular on a common arms policy, as India is one of the world’s largest arms importers and Russia is its main supplier.

Furthermore, Srinath Raghavan, senior professor of international relations at India’s Ashoka University, says that Russia is not only an important defense partner for India, but also “plays a certain role in relation to Indochinese problems. New Delhi does not want to Moscow closer to Beijing”.

Since the 1960s, the two great emerging powers in Asia have had a border conflict that persists to this day, especially in the region of the Himalayan mountains. So one thing is certain: if Indian Prime Minister Narendra Modi opposes Putin, China will have a powerful and closer neighbor and ally in the regional conflict in Russia.

Consequently, both countries only emphasized their “particularly privileged strategic partnership” during Putin’s visit to India in December and agreed to further arms deals. Indo-Russian “relations both at the international level and directly in the military sphere” should be further developed. Modi praised the “constant friendship” between the two nations.

The West, in particular, views this friendship with concern. Because India, as the world’s largest democracy, should actually be an important ally in the Indo-Pacific region. The Indian government’s restraint in the Ukraine war dampens this hope. However, Indian pundit Raghavan says Modi will be cautious “when it comes to things involving third-party sanctions.” The United States has long considered expanding sanctions against India in response to its recent purchase of Russia’s S-400 missile defense system.

Brazilian President Jair Bolsonaro was in Moscow last month. The timing of the meeting during the already dire Ukraine crisis illustrates the partnership between Bolsonaro and Putin. Consequently, even after Russian troops invaded Ukraine, Bolsonaro did not criticize Putin’s decision. When Brazilian Vice President Hamilton Mourao publicly said that Brazil “respects Ukraine’s sovereignty,” Bolsonaro called him back. Only the President himself can make such statements. According to him, Brazil is “in solidarity” with Russia; if he also applies this to the Ukraine war, he leaves it open.

Bolsonaro has significant economic interests in relations with Russia. The Brazilian economy is largely based on agricultural production, which in turn depends on fertilizers from Russia and Belarus. If agricultural yields were reduced due to lack of fertilizers, this would be felt above all by the citizens of Brazil with the increase in prices and inflation, which is not an option for the Brazilian president in the face of the upcoming elections this year.

Brazil’s approval of the UN resolution calling for the withdrawal of Russian troops from Ukraine came as a surprise. Experts believe that Bolsonaro is balancing his international strategies: after the deforestation of the Amazon and other diplomatic fiascoes, the president can no longer afford to turn the international community against him. Especially after Bolsonaro is currently behind his presidential competitor Lula da Silva according to a poll.

Belarusian President Alexander Lukashenko and Serbian President Aleksandar Vučić are among Putin’s most loyal allies. They not only support their recognition of the independent Donetsk and Luhansk “People’s Republics” and Russia’s military invasion of Ukraine, but also spread Russian propaganda to legitimize the invasion.

In addition, Lukashenko has already allowed the Russian military to station troops in Belarus, as well as launch Russian missile strikes from Belarus against Ukrainian targets.

The communist countries of Cuba, Venezuela and Nicaragua are also among the closest allies of the Russian president. Russian Deputy Prime Minister Boyko Borissov recently visited the countries and spoke of closer ties between the nations in the future. Consequently, the three countries abstained from the UN resolution condemning Russia.

South American countries are tied to Russia both ideologically and historically. Nicaraguan dictator Daniel Ortega sides with Putin, arguing: “Russia is simply defending itself”: his revolutionary regime received direct support from the Soviet Union as early as the 1980s.

Venezuela has long been seen as Putin’s central anchor point in the West after US-Venezuelan relations deteriorated dramatically in the early 2000s. In the past two decades, Caracas has become the largest buyer of Russian military equipment, while Russia is the largest lender to the Venezuelan government. In this sense, the president of Venezuela, Nicolás Maduro, says: “Venezuela is with Putin.” However, the US oil embargo against Russia could reinvigorate the relationship between Venezuela and the US, as the Biden administration is said to be considering importing oil from Venezuela as an alternative.

The course of rapprochement between Cuba and the US has also ended in recent years: once a key project of former US President Barack Obama, his successor Donald Trump had once again cooled relations with Havana. At the same time, Putin has sought a closer friendship with the former Soviet ally and has since supported Cuban projects such as the modernization of the defense industry. The Cuban government blames the US and NATO for the escalation in Ukraine, since it promoted the “expansion of NATO towards the Russian Federation” and thus provoked Putin. However, Cuba would support a diplomatic solution to the crisis.