The week of “seconds”: new delivery of Emmanuel Carrère’s chronicles since the Paris attacks trial 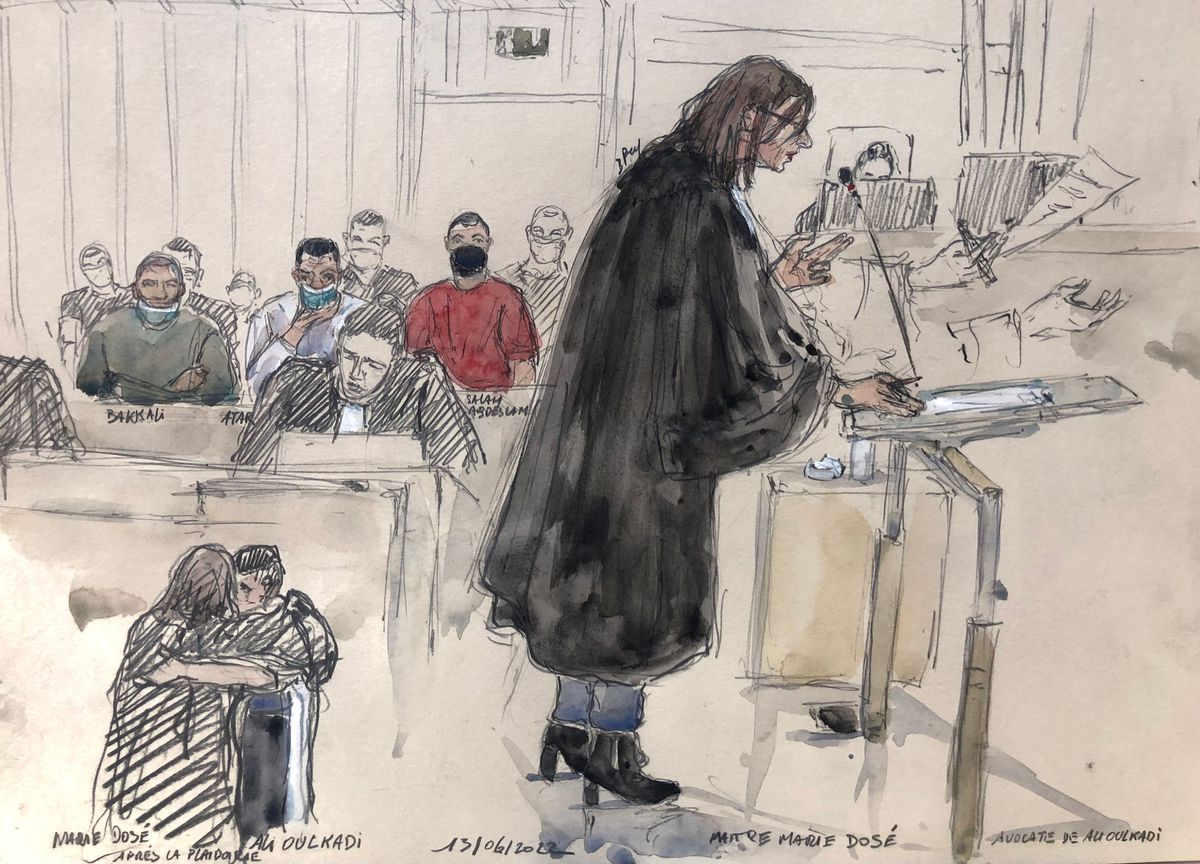 1. A sound of hooves

“When I walk through a park in Brussels and hear hoofbeats, I think of a horse, not a zebra. The public ministry thinks of a zebra. My client is a drug dealer. He will meet other traders in Rotterdam, a city known for the ease with which these goods are available. What is the prosecutor’s conclusion in this regard? That he left to buy weapons!” This is what Jonathan De Taye, one of Ali Haddad Asufi’s three lawyers, says. It’s the end of the first week dedicated to the defense of the accused, whom prosecutors don’t want to call “comparsas” because they believe there are no second-rates when it comes to terrorism. And just as I had foreseen, having been almost completely convinced by the endless pleading of the Hennetier-Braconnay-Le Bris trio, I am now, shall we say, 50% convinced by the lawyers destroying it.

“I couldn’t ignore it.” This phrase, with several variations, backs up the charge against ATM (terrorist group of criminals) which can be described as a mixed bag, a gray area, a machine operating under the guise of soul searching rather than sticking to the facts condemn is. Hamza Attou was a friend of Brahim Abdeslam, whose radicalization, according to prosecutors, was evident. He should have seen the danger and reported it. Delphine Paci, one of Attou’s lawyers: “You have an anti-vaccination neighbor. He pesters you with conspiracy talk. How are you? You shrug. One day he shoots at a vaccination center. Will they put you in jail for not reporting it? Belgian police couldn’t calculate how dangerous Brahim is, why expect more from a poor 21 year old drug dealer? (Seductive but misleading argument: Belgian police didn’t see Brahim every day). Another allegation: “When I accompanied Brahim to the airport, who claimed he was going to Turkey on vacation, how could Attou ignore the fact that he was actually going to Syria? It is obvious that he accompanied him in this, why else? Attou’s reply, quoted by his lawyer: ‘I don’t know if you do the same, Mr Lawyer, but we do in Molenbeek when a friend buys one Baguette, we accompany you. Sometimes five of us get together to accompany him.”

All this was obvious, but for whom? In their response to the motion, defense attorneys have argued that prosecutors are very intelligent people, but they have the common mistake of believing that everyone is as intelligent as they are. Instead of putting themselves in the shoes of rather limited people like Ali Oulkadi, Hamza Attou or Abdellah Chouaa, they are amazed that they don’t have the analytical finesse and bourgeois reflexes of Camille Hennetier, Nicolas Braconnay and Nicolas Le Bris. And not only these reflections: also the classical ones. No doubt five prosecutors don’t get together to buy one Baguette, and if you’re driving through Florence, don’t forget to visit the Uffizi Gallery. I was reminded of the audience where they were trying to understand that Excursion Flash of Abdeslam and his friend Dahmani on the way to Greece, through Italy, in the summer of 2015. Two days there and two days back without stopping, although there was so much to see: what’s the point? Abdeslam’s reply: “You, Mr President, certainly have the means for a more luxurious holiday, but we don’t.”

Justice is always more or less like this, the penal code was invented to prevent the poor from stealing from the rich and the civil code to allow the rich to steal from the poor. Only in this case – and this is one of the prosecution’s strong arguments – the defendants are not poor. They’re not rich either, ok, but they don’t suffer from social exclusion, they didn’t grow up in seriously dysfunctional families, so please don’t give in to ‘sociological blackmail’. It’s a term prosecutors seem to like, but what does it mean? asks Delphine Boesel, another of Attou’s lawyers. Is it sociological blackmail to be interested in the social and cultural environment in which the accused grew up? Is it to admit that they don’t control everything, that they don’t decide everything they do after mature and clear deliberation, that they are also the product of something that surpasses them? It is not just acts that are judged, but people, and the function of the judiciary is to measure itself against them. In any case, it is the role of defense. It has been said and repeated how important it was that this function be well performed in the Extraordinary Trial on Friday the 13th.

4. What they should and shouldn’t do

Even their defense attorneys admit that Muhammad Usman and Adel Haddadi are said to have been involved in the attacks. Even the Public Ministry admits they didn’t take part. Arrested on the island of Leros and imprisoned on Kos, their journey was delayed. On November 13th, when they should have been in Paris, they were in Slovenia. In ordinary justice, this is called an irrefutable alibi, leading to acquittal even if they had very bad intentions. In anti-terrorist justice this is not the case, intention is enough and these two men can be sentenced to twenty years in prison. We’re not far from it minority report, Spielberg’s film, based on a short story by Philip K. Dick, in which people are arrested before they commit the crime that a computer program predicts. It’s totally illegal, but in this particular case it’s almost unanimously accepted. Why only in this case?

There are other horrific crimes, and as Ménya Arab-Tigrine, a lawyer for El Haddad Asufi, pointed out, we have not yet succeeded in pre-emptively arresting all men wearing cassocks as pedophiles. It doesn’t matter: this obvious, irrefutable argument that should put an end to the debate – I repeat: justice cannot be preventive, someone is judged for what he has done, not for what he could have done or did would – it has become inaudible, out of place, and that is why such an excellent lawyer as Edward Huylebrouck feels so helpless at the end of what is on all points a magnificent argument that he says something so careless as: “Perhaps I walked through Mozart’s town, Muhammad Usman got a slap in the face of humanity.” Maybe.

Farid Kharkhach is the strangest of the co-defendants. He’s the go-between who supplied the cell with fake IDs. Since there is no trace of radicalization in his file, according to the public prosecutor’s office, he made a pact with jihadism out of greed. This greed earned him the €300 he has spent in prison for the past six years, and he is by no means sure he will be released. Throughout the trial, his dreamy personality, his sudden choice of words, his loneliness (he doesn’t know any of the other defendants), the incredible and almost burlesque succession of disappointments and bad luck that earned my teammate Violette Lazard the nickname “Farid the Ashes” Marie Lefrancq, one of his lawyers, describes him as a loving family man who didn’t dare explain to his young children why he hasn’t been home for six years, first telling them that he was ill and that she was taking him treated in France. And later, when the children visited him in prison, he said that he had become a prison guard. I’m not making it up. Although she did not live to see it, Marie Lefrancq guarantees the authenticity of the scene: Farid Kharkhach receives his children in the quarters and assures them that he is not under arrest but is a guard I don’t know how that’s possible but I reminded mic h to another movie, life is beautifulin which Roberto Benigni makes his young son believe that Nazi concentration camps is a fun game of treasure hunt and I figured if Kharkhach doesn’t do too badly he’ll be able to say with no regrets that his sad story is the subject of amazing comedy.

This chronicle, written for Le Nouvel Observerappears in The Republic, The country Y the temps.