The Washington Post: Putin can neither win nor lose the war 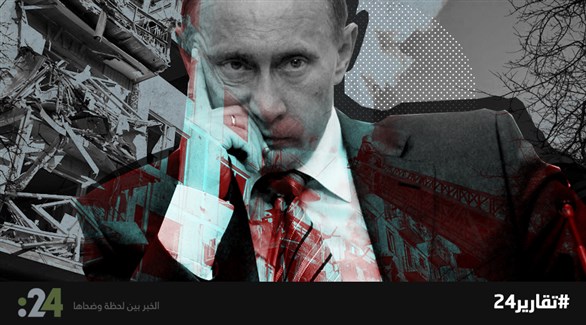 After the invasion of Ukraine, Russian President Vladimir Putin faces a central dilemma, according to the analysis of the political writer of the Washington Post, Max Boot, it is a war that Putin believes he “cannot lose”, in the words of the director of National Intelligence, April. Heinz, but at the same time, it doesn’t seem like a war, he can win it.

If Putin wants to avoid a long-term quagmire, sooner or later he will have to soften his extremist goals and end this vicious war.

It took US forces just three weeks to take control of Baghdad in 2003, while Putin is still far from achieving his stated goals in Ukraine three weeks after the invasion began. As he announced, Putin sought to “disarm” Ukraine and “destroy Nazism from it,” which means imposing a puppet regime in the hands of the Russians.

Lost bet
The Russian president’s best bet, according to the writer, was to wage a blitzkrieg against kyiv in the first days of the war. But that faded and the Russian military did not show the ability to constantly supply its armored columns or to coordinate air and ground operations.

The Russians made more progress in the south than in the north, but their progress has now stalled and they still cannot control the sky. The Ukrainians launched a clever and stubborn defense that is an inherently easier military task than attacking. And the Russian military is trying to make up for its lack of military skill with outright brutality. But this brutality could backfire with the rise of even tougher resistance.

What does Putin know?
Leningrad withstood the German siege for almost 900 days between 1941 and 1944, and Putin must be well aware of this history since Leningrad, today Saint Petersburg, is his birthplace and where his brother died during the siege.

The townspeople starved to death but did not give up. Bot added that destroying a city with artillery and missiles is much easier than occupying it. The rubble creates fighting positions for defenders and impedes the movement of armored vehicles.

It took 9 months between 2016 and 2017 for Iraqi forces backed by the US military to retake Mosul from nearly 6,000 ISIS militants.

The writer wondered if Putin would like a prolonged siege on kyiv as sanctions continue to hit the Russian economy and coffins continue to come home.

Big losses
US officials conservatively estimate the deaths of 5,000 to 6,000 Russian soldiers in the first two weeks of the war, or about 400 a day. The real figure may be about 700 deaths per day.

This type of loss has not been seen in Russia since 1945. In Afghanistan, the Soviets lost an average of 5 deaths per day, and even that number was enough to undermine the regime.

Putin is really feeling the pressure as he is trying to recruit Syrian mercenaries and has asked China for military equipment, according to some reports. These are signs that he does not have enough soldiers or weapons to make up for larger-than-expected losses in a war It doesn’t go according to plan.

Overthrowing kyiv does not mean winning the war
Bot saw that the Russians could reach kyiv. And it is possible that they could kill or capture Ukrainian President Volodymyr Zelensky. But that won’t win the war.

A free Ukrainian government could simply move to Lviv in western Ukraine or Poland and continue to mobilize resistance.

But Putin is far from having enough forces in Ukraine — fewer than 190,000 estimates — to control a country of more than 43 million people.

There is little chance that Putin will recruit pro-Russian security forces in western Ukraine, as he has done in eastern Ukraine or in Syria.

Even Ukrainians who were once friends of Moscow are now mired in hatred of Russia. And the anti-Russian protests continue under the reach of the occupiers’ weapons.

warfare
In his book Invisible Armies: An Epic History of Guerrilla Warfare from Antiquity to the Present, Bott concludes that scorched-earth counterinsurgency is only effective if the guerrillas are weak and receive no outside help and when the counterinsurgency is much larger in number. They have political legitimacy.

These conditions applied to Chechnya, which represented Putin’s first war. But none of them apply in Ukraine, nor in Afghanistan before.

mutual hell
Putin has made life hell for Ukrainian civilians, but Ukrainian fighters may make life hell for Russian forces for years to come, and it will take more than a few missile strikes to cut off supply lines Ukraine from its NATO neighbors.

The Russians may have many more, but the Ukrainians have a decisive moral advantage. As the Ukrainians fight for their homeland, many Russian soldiers were not told where they were going and surrendered at the first opportunity.

Putin’s need
If Putin wants to avoid a long-term quagmire, sooner or later he will have to soften his extremist goals and end this vicious war.

The only way is to accept defeat and call it victory. Fortunately for him, he is an experienced Dodger. But the big risk is that Putin is not completely rational in Ukraine, so he may try to keep winning an unwinnable war, at a high cost to both sides.