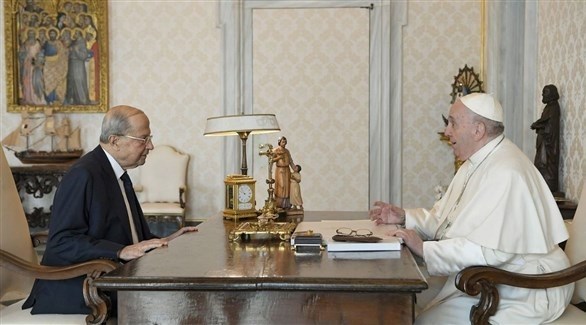 A few days ago, Lebanese President Michel Aoun visited the Vatican headquarters and met with Pope Francis, Pope of the Catholic Church, and other officials. After the visit, Aoun’s team leaked information about the conversation that took place during this visit, but hid several aspects of the truth of what happened.

Sources in Beirut, who followed the visit, learned that “Vatican officials asked Aoun about Hezbollah’s role in protecting from corruption and its interference in the Lebanese judiciary, especially in the cases of investigation into the explosion of the port of Beirut, the assassination of the writer Luqman Salim, and the attempt to attack the Ain al-Rummaneh area months ago.”

The sources indicated that Vatican officials warned Aoun that Hezbollah’s continued interference in the work of the judiciary and its protection against corruption, supported by Free Patriotic Movement ministers, would lead to new international sanctions that would affect his son-in-law, Gibran. Bassil and other politicians affiliated with him.

One source said the militias carried out internal assassinations and smuggled ammonium nitrate, blowing up half of the capital Beirut, and started or supported wars in neighboring countries, from Syria to Yemen to Iraq, and attempts to drug and arms smuggling, propelled the international community. Officials warned of several sanctions being prepared in the US Congress, aimed at imposing more restrictions to prevent the expansion of these militias.

The source believes the region is at a crossroads over the US-negotiated nuclear deal with the Iranians, as Tehran tries to return to the old deal signed in 2015 and lift all sanctions and delist the Revolutionary Guards. of terrorist organizations, while continuing to move its militias in the region, starting wars and launching its missiles. And its drones are against civilian targets, signaling that these developments will certainly affect the Lebanese interior, as Hezbollah is ready, as usual, to reignite wars, as it did in 2006 when it ignited a war in southern Lebanon to help Tehran to impose its conditions in the nuclear negotiations.

The fear is of a confrontation that will directly affect Lebanon, since Hezbollah has taken full control of state institutions through its alliance with the Aounist movement, bringing the internal situation to a point where it can go from tension only to internal confrontation, while there is no capacity to intervene and impose an internal settlement that would disarm the militias, and establish a new phase that would give Lebanon a positive neutrality towards the Arab countries.