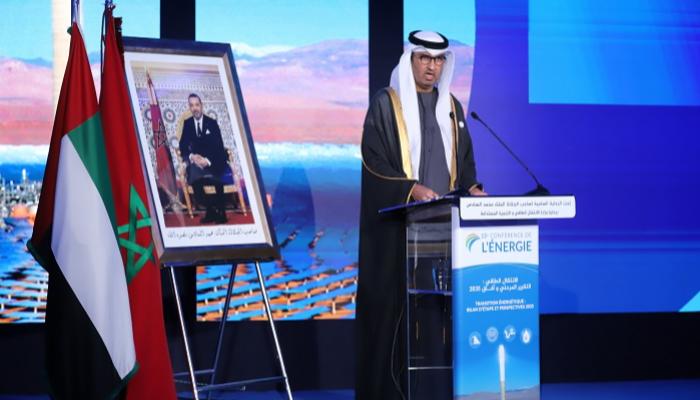 He stated that the wise leadership in the UAE was directed to exploring opportunities for joint investments with the Kingdom in vital sectors including conventional energy, liquefied gas, distribution stations, renewable energy projects and other promising fields.

This came in a keynote speech during the opening session of the fifteenth session of the Energy Conference, held today in the Moroccan capital, Rabat, where the United Arab Emirates was chosen as the guest of honor for its current session.

The event is being held under the patronage of King Mohammed VI, King of the Kingdom of Morocco. The list of speakers at the first session included Patricia Lombar Cusack, Ambassador of the European Union in Morocco, Mr. Achraf Tarsem, Director of the African Development Bank of Morocco, and Abdellatif Bardach, President of the National Authority for the Regulation of Electricity of Morocco.

Strength and durability of relationships.

At the beginning of his speech, Dr. Sultan bin Ahmed Al Jaber conveyed greetings from the UAE leaders, government and people to the brotherly Kingdom of Morocco, wishing them further progress and prosperity.

He said: “We are honored to have the United Arab Emirates as the guest of honor at this important conference, which reflects the strength and solidity of Emirati-Moroccan relations and the qualitative developments and developments they witnessed in various fields under the wise direction of the two wise leaderships in the two brother countries, represented by Sheikh Khalifa bin Zayed Al Nahyan, President of the State and his brother, King Mohammed VI”, explaining that these relations have continued to grow and progress since the founding father , the late Sheikh Zayed bin Sultan Al Nahyan, may God bless him, laid its foundations and his brother, King Hassan II.

He referred to the current situation in the energy markets and said: “Today, the energy markets are witnessing large and largely unprecedented fluctuations due to global geopolitical turmoil. One of the reasons for these fluctuations is also the decline in investment in the long term in the fossil fuel”. sector, leading to shortages in supply and supplies…according to a report by the International Energy Forum, global spending on oil and gas projects in 2020 fell 30% to $309 billion.

He noted that despite the slight improvement in these investments in 2021, ensuring global energy demand keeps pace and avoids shortages in the coming years requires driving more investment to return to pre-pandemic levels of 525 billion US dollars annually until 2030. He noted that new energy sources alone are not enough to meet the growth in demand.

He said: “We in the UAE continue to invest in developing oil production capacity, while at the same time focusing on reducing emissions, in line with our commitment to being a responsible and reliable energy provider. Through the vision of wise leadership, we look at the transformation and transition in the energy sector, as a real opportunity for sustainable economic growth, we focus on adopting a realistic, logical and practical vision in this field”.

And he indicated that the history of previous transformations in the energy sector clearly confirms that the transition cannot take place in a single step or with the touch of a button, pointing out that to ensure the success of this transformation, it must be thoughtful and based on logic. . foundations, and is based on a practical roadmap and gradual operational steps, and will take decades, during which the world’s need for oil and gas continues.

He stressed the need to always remember that the main objective of the transformation in the energy sector is sustainable development that coincides with the reduction of emissions, not with the reduction of growth rates, progress and prosperity, and this requires continued smart investment in a diversified mix of energy sources. including solar power, wind power and hydropower, and peaceful nuclear power, as well as less emission-intensive hydrocarbon resources.

Dr. Sultan bin Ahmed Al Jaber said: “The United Arab Emirates began the process of transformation in the energy sector more than 15 years ago with the establishment of the Abu Dhabi Future Energy Company “Masdar” as a multifaceted initiative for sustainable development and the capacity. building in the field of renewable energy, with a focus on the development of clean technologies and viable economic opportunities… and we see a bright future for the renewable energy sector worldwide, as it is expected to invest at least $ 3 billion in the field of renewable energy over the next ten years… and we have invested through Masdar in solar and wind energy projects in 40 countries around the world.

He added: “Here in the sister Kingdom of Morocco, Masdar, in partnership with the National Office for Electricity and Potable Water, established a solar home systems project to install nearly 20,000 solar home systems in more than 1,000 Moroccan villages. There is also interest in developing the Noor Midelt plant project, which has a production capacity of 800 MW, which is the first advanced hybrid solar plant project in the world that uses a combination of solar photovoltaic and concentrated solar energy. 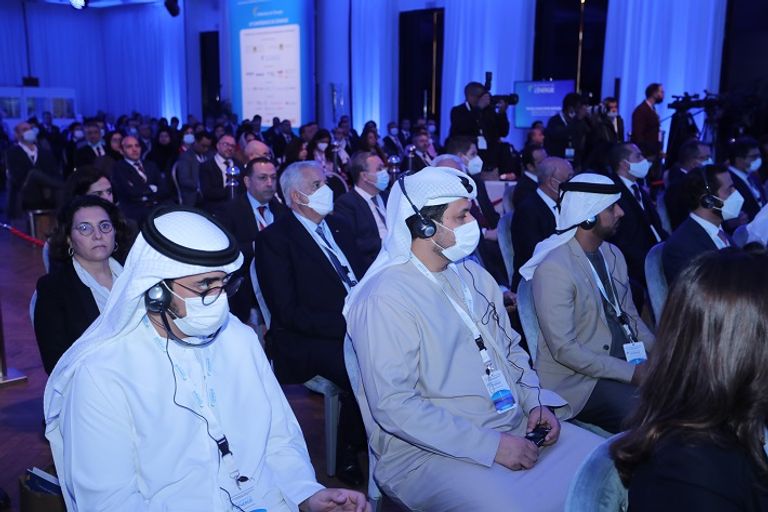 He explained that the joint projects between the UAE and the sister Kingdom of Morocco represent a solid foundation on which to build, especially with Masdar expanding its global capacity under the leadership of Sheikh Mohammed bin Zayed Al Nahyan, Crown Prince of Abu Dhabi and MP supreme. Commander of the Armed Forces, where three major energy companies entered the United Arab Emirates, the Abu Dhabi National Energy Company “TAQA”, the Mubadala Investment Company and the Abu Dhabi National Oil Company “ADNOC”, in a strategic partnership to develop the leading Portfolio “Masdar” of clean energy, as well as strengthen efforts in the field of green hydrogen.

He stressed the UAE’s aspiration to continue cooperation with the sister Kingdom of Morocco on this path full of opportunities, as the UAE has established its leadership in the field of renewable energy and climate action by hosting the International Agency for Renewable Energies (IRENA) since 2009, and this was reinforced by the choice of the UAE to host the Conference of the Parties to the United Nations Framework Convention on Climate Change COP28 next year.

He explained that the UAE hopes to work and cooperate with the international community to make this conference comprehensive, inclusive and achieve tangible results in limiting the impacts of climate change, and that it will also coordinate and prepare with Arab brothers. Republic of Egypt, which will host the COP27 Conference this year, noting that the country hopes to consult, coordinate and take advantage of the experiences of the sister Kingdom of Morocco in climate action, especially since it hosted the COP22 conference in 2016 in Marrakech. .

He pointed out that the Kingdom of Morocco has also established itself as a pioneer in the use of renewable energy, which has come to cover nearly 40% of the electricity needs of the Kingdom.

He said: “The sister Kingdom of Morocco is full of promising investment opportunities in various sectors, and the UAE is a natural partner in these opportunities, as the UAE has been the first in terms of the volume of Arab investments in Morocco since 1976, and their investments in the Kingdom have exceeded AED20 billion.The Emiratis are involved in many strategic sectors, including energy, minerals, infrastructure, telecommunications, tourism, real estate, agriculture and services.

He added: “In 2020, the volume of trade between the two sister countries in non-oil products amounted to approximately 2.2 billion dirhams, and the Abu Dhabi Fund for Development contributed to financing 82 development projects in Morocco, worth of about $2.45 billion, in addition to that, “TAQA” company “The Emirati company, which established the thermal power plant in the Jorf Lasfar region, is the main supplier of the National Office of Electricity and Water, since it covers more than 50 % of the Kingdom’s internal electricity demand”, explaining that these numbers and data confirm that we have many partnership opportunities in many fields. Projects that open up new areas of cooperation.

Concluding his speech, Dr. Sultan bin Ahmed Al Jaber called on the government and private sectors of the brotherly Kingdom of Morocco to develop and strengthen existing alliances with their counterparts in the United Arab Emirates, and to explore opportunities for partnership and cooperation in new We are ready to be a strategic partner for the sister Kingdom of Morocco in the transformation of the energy sector, and we are ready to explore investment opportunities in conventional energy, liquefied gas, distribution stations, renewable energy projects and other promising areas. for sustainable economic growth.

It should be noted that the fifteenth session of the Energy Conference is organized by the Moroccan Energy Union, under the theme “Energy Transition: Achievement Report and Vision 2035”, with the support of the Ministry of Energy Transition and Sustainable Development.

The conference brought together high-level speakers and participants from the energy sector at the local and international levels, and witnessed a series of sessions that discussed important titles, including “Accelerating the deployment of renewable energy”, “Natural gas, a means of energy transmission and advancement of development”, and “Hydrogen is a new industrial opportunity.” for Morocco”, and “Decarbonise national industry, a new locomotive for international competitiveness”.