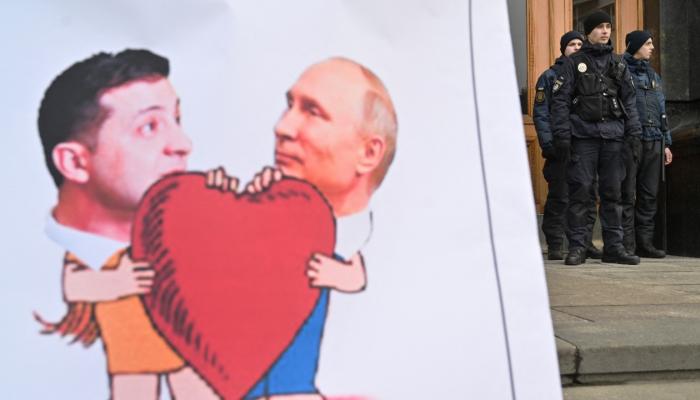 With the fighting in Ukraine and uncertainty over a possible ceasefire, hope remains that a snowball will roll from a summit meeting that will extinguish the flames of war and warm the hearts of the world.

A meeting that the Ukrainian president, Volodymyr Zelensky, insists on holding with his Russian counterpart, Vladimir Putin, who has so far refused to accept the invitation.

An appeal repeats these days the palace in Ukraine, before the resurgence of the bombings on the 27th day of the war.

Two days ago, Zelensky told CNN that he was ready to negotiate with Putin, saying: “I have been ready for the last two years and I believe that we cannot end this war without a negotiation.”

The Ukrainian president on Monday reiterated his offer to hold direct peace talks with his Russian counterpart, indicating that the status of the disputed territories may be under discussion and a possible referendum.

He told reporters that “if I have this opportunity and Russia has the desire, we will go through all the questions”, adding: “Are we going to solve all of them? No. But there is a possibility that we can stop partially, at least.” war.”

What are the chances of meeting?

On March 1, five days after the outbreak of the war, Kremlin spokesman Dmitry Peskov declared that it was premature to talk of a meeting between Putin and Zelensky.

However, as the days went by, Peskov replaced the tone of pessimism with that of optimism, and declared on the eleventh of this month that “the possibility of holding a meeting is not ruled out.”

The optimism linked by the Kremlin spokesman to the need for the ministers and delegations of both parties to complete their work in the ongoing negotiations, “so that the two presidents do not meet to meet, but to achieve a result.”

On the other hand, the ongoing negotiations between Russia and Ukraine are sending up plumes of smoke, some accompanied by clouds of optimism and others not.

The agreement to open safe corridors for the evacuation of civilians from combat zones was one of the positive results of those negotiations.

However, despite this progress, the talks “still have difficulties” in reaching an agreement that satisfies both parties, which was announced by the Russian delegation on Monday and confirmed by the Ukrainian president.

The Russian delegation said that the objective of the current rounds of negotiations is to find a solution to a series of complex issues in preparation for putting them on the agenda, leading to the final result, which is “to conclude a peace that suits the two peoples “. .”

What is Putin waiting for?

From Moskova to the Bosphorus, the waters of war are moving, indicating that Putin is not yet ready to take on Zelensky and probably wants more war profits.

This was hinted at by the adviser to the Turkish president Recep Tayyip Erdogan and his spokesman Ibrahim Kalin in their interview with the “New York Times”, considering that the Russian president is seeking a “stronger position” before a possible summit.

However, Kalin, whose country is moving diplomatically along the lines of the war, did not rule out the possibility of a meeting, saying it would happen at some point.

“There will be a peace agreement at some point. Of course, we all want this to happen sooner rather than later, but Putin probably thinks he wants to be in a position of strength when he does that, and he doesn’t appear to be weak, weakened by military losses or economic sanctions,” he added.

Turkey has close ties with Moscow and kyiv and hosted a historic meeting between Ukraine’s foreign ministers Dmytro Kuleba and Russia’s Sergei Lavrov in the southern tourist hub of Antalya last week.

And if they meet, where will the summit be?

Until the Russian president shows a real interest in negotiating with his Ukrainian counterpart, attention remains on the place that will unite the two sides.

In light of the competing diplomatic efforts in search of a solution to stop the war, Turkey and Israel appear on the scale of the places that can host the meeting.

For his part, the Ukrainian president saw Israel as a suitable venue for a meeting with his Russian counterpart, in light of talks about an upcoming visit by Israeli Prime Minister Naftali Bennett to kyiv, after previously meeting with the Russian President Vladimir Putin. this month.

On the other hand, Turkish President Recep Tayyip Erdogan has repeatedly announced his country’s readiness to host a meeting with his Russian and Ukrainian counterparts.

An intention reinforced by the Turkish efforts in the line of the crisis, among which the reception by Turkey of the first talks between the Russian and Ukrainian foreign ministers since the beginning of the war stands out, in a long-awaited meeting between the two parts.

Israel, in turn, is promoting a specific political advantage that allows it to achieve a breakthrough at the summit table, with an Israeli diplomatic source telling AFP that his country is “the only player capable of talking directly with Russia and Ukraine.” , and with Western countries such as Germany and France”.

The Turkish-Israeli attempts at which Marc Perini, visiting professor at Carnegie Europe, sees it as “a good thing” but does not see it as “critical”.

“I don’t think a peaceful solution can go through Turkey and Israel because Putin’s fight is with (US) President (Joe) Biden and NATO, and I’m not sure he wants a way out of this crisis.” , said. he told AFP.

Between the two attempts, observers believe that Turkey’s chances of realizing this hope are slim, due to the differences between the two sides, who were at odds in the conflicts in Libya and Syria.

Will the alliance that Erdogan made with Putin in recent years and that at times annoyed NATO manage to tip the Turkish balance?

How will Zelensky persuade Putin to fix the war?

The answer to the question requires a review of the thorny issues between Russia and its former Soviet neighbor.

Moscow had offered the West a list of security guarantees to reduce tensions in Europe and defuse the Ukraine crisis.

A list that includes that NATO will turn back the clock to 1997 and withdraw its forces and military infrastructure from member states that have joined the alliance since that year, and will not deploy offensive weapons near Russia’s borders, meaning Central and Eastern Europe. .

In this regard, President Putin says that the West promised in 1990 that NATO would not expand “one centimeter to the east”, but did so anyway, referring to the era of then-Soviet President Mikhail Gorbachev.

Russia also demanded not to hold exercises without Russia’s prior consent in Ukraine, Eastern Europe and Caucasus countries like Georgia or in Central Asia.

The Russian demands did not stop there, but also extended to “denazification”, according to the Kremlin.

And Crimea, Lugansk and Donetsk cannot spoil the deal if the two sides agree to address this issue at a later time.

Given that the Ukrainian president has recently abandoned his insistence on his country’s entry into NATO, this knot may unravel the issue of military neutrality demanded by Russia.

What about the European Union?

For the Kremlin, it is not only related to NATO, but also to another knot, which is kyiv’s desire to join the European Union.

Ukraine, since gaining its independence in 1991 with the collapse of the Soviet Union, has gradually moved towards the West, represented by both the European Union and NATO.

And the Ukrainian president had previously called during the war days for the European Union to “do more” for his country, after the leaders of the 27 countries ruled out the rapid accession of kyiv to the bloc, in an emergency meeting held in the French Versailles. to discuss the repercussions of the Russo-Ukrainian war, then entering its fifteenth day.

The war resulted in growing support within the European Union for the Ukrainian president, but the bloc’s leaders saw that a quick path to membership was “not possible.”

kyiv says its requirements are clear, a ceasefire and the withdrawal of Russian forces, but also legally binding security guarantees that would give it protection from a group of allies that would prevent attacks and “play an active role on Ukraine’s side in the conflict”. .

As for ensuring Russia’s military withdrawal to prewar positions, it would not only be a demand for Ukraine, but also a red line for the West, which would refuse to accept other “frozen Russian conflicts,” says Mark Wheeler, professor of international law and former UN mediation expert, for the British BBC.

Given Zelensky’s repeated insistence on holding a meeting with his Russian counterpart, will Putin accept the invitation and pick up the phone, which he “ignored” at the start of the war -as announced by the former- presaging a spring that will melt the thick ice applied to war craters.

An insistence that is accompanied by reasons that continue with the impact of an optimism that is struggling to materialize on the ground, seems so volatile that it is difficult to predict possible scenarios, but the constant is that the outcome of the negotiations is often determined by the balance of power on the ground.