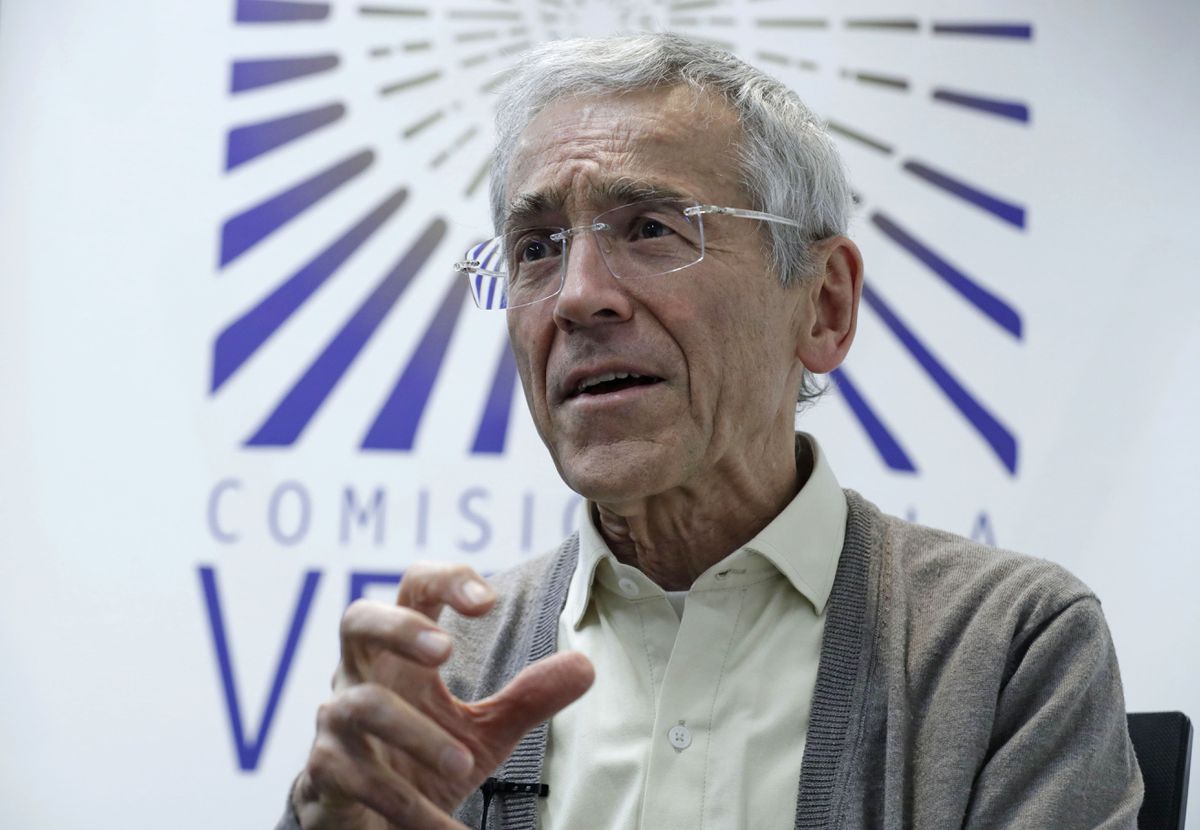 When Father Francisco de Roux, President of Colombia’s Truth Commission, addressed Colombians Tuesday morning to present a detailed final report on the war, he included in his speech a series of difficult-to-answer questions. “Why do we Colombians let this dismemberment pass us by for years as if it weren’t with us? Why did we watch the massacres on TV day after day like it was a pulp novel?” he asked. De Roux mentioned the FARC kidnappings, the paramilitary massacres, the extrajudicial executions by the army. But the report points out that the majority of the dead during the 60 years of war were not gunmen: 90% were civilians. These difficult questions were addressed not only to the armies but to all Colombians. “What happened to society, the state, to ourselves?” he asked.

The final report – a book with almost 900 pages – is not just a historical document with figures, dates and almost 30,000 testimonies. It is a document that tries to go further and analyze the emotions of Colombians and the culture of a society at war. Right from the start, the report asks whether, despite several peace processes, the violence in Colombia will not stop, not only because of the drug trade or the arms market, but also because of a lack of empathy. “The lack of empathy for this pain is part of what Colombia needs to change,” the text reads. “In contexts of entrenched and ongoing collective violence, such as in Colombia, emotional distancing and desensitization are psychological consequences that affect us all.”

In an attempt to answer the difficult questions, the document then devoted a special chapter to culture at war, and therein lies a key concept for the commissars: that of the enemy within. “A central finding of the Truth Commission, which has great potential to explain the continued existence of the conflict, is the stigmatization as enemy builders, as the basis for physical, social and political persecution and annihilation,” they write at the beginning of the chapter. . “This mechanism was installed in the culture as an extension of the multiple prejudices that exist in the country and are enshrined in the history of nation-building.”

Who has the enemy within? All, according to the report. The FARC built the internal enemy in addition to the military in businessmen or elites. The military and paramilitaries saw it in social movements or left parties, not just the guerrillas. And the Colombians, who were not armed, inherited all these enemies, and there, little by little, distrust grew and empathy disappeared.

In the second half of the 20th century, the commissars explain, the internal enemy of the Cold War was the left-wing militant, due to the influence of the United States in fighting communism. They refer to the US recommendations adopted by the government of Alberto Lleras Camargo (1958-1962) in a series of decrees, but make it clear that the doctrine is “not only because of the influence of the United States, but also because as it turned out, it was assumed to represent the interests of the sectors with political, economic and social power.

You save a Handbook of Operations Against Irregular Forces of 1962, which already put the citizens in danger. “The close relationship between the civilian population and the irregular force may require the implementation of drastic control measures,” the military document said. Another 1979 handbook allowed the army to divide the civilian population into three groups: white lists (those who support the military), black lists (those who support subversive groups), and gray lists (the undecided). In areas where the insurgent groups were located, every civilian was suspect. As an Indigenous man told the truth commission for the army in their territory, “every Indian is a guerrilla fighter.”

The enemy within, the report explains, mutated at the same time as the war spread. If the first was the communist, since the Richard Nixon administration and his declaration of war on drugs, the enemy within has become the drug trafficker – eventually leading to the criminalization of not just someone like Pablo Escobar, but hundreds of coca farmers in the poorest communities of the country. After the attacks on the Twin Towers in 2001, the enemy within was the terrorist or the drug terrorist.

The internal enemy’s military discourse gradually seeped into other social spheres, and the commissars salvage an episode from 2003, when former President Álvaro Uribe (2002-2010) responded to a critical book by a group of NGOs, calling them all “politicians at the service of terrorism”. Even the human rights activist group called the Middle Magdalena Development and Peace Program — founded and led by the commission’s current president, Father Francisco de Roux — was singled out by security forces as an internal enemy in 1998: one group suspected he was an ELN collaborator.

In other words, the internal enemy could be anyone who did not support either the army or the government. And when he disappeared or was murdered, the report said, society would suspect the victim with phrases like “He was involved,” “Surely he had something to do with what happened to him,” and “What can you say about them expect people”.

“This construction of the enemy went beyond personal and intimate relationships,” the report said. “On the institutions and the way of interpreting and applying the law, and more particularly in the political sphere, which by definition is the place of defense of the common good, which seriously affects democracy.” The media add briefly, while in some cases While investigating war crimes, in other cases they helped fuel discourse about the enemy at home. “They have stimulated violence through stigma and the silence on some issues. All of this affects the culture, the way we treat each other,” the Colombian media report said.

But the report also mentions a more distant reaction to the construction of the enemy within. “Our culture has inherited an exclusive vision of the other, of ethnic peoples, of the poor peasant, of the dissident, of the opposite,” the commissioners write. “Distrust of the different did not arise during the armed conflict, but it has intensified as it developed.”

Here the authors of the final report return to a history of exclusion that stems from the Spanish colony, when not only a process of land concentration began, but also a system of racist, classist and sexist domination that needed an internal enemy. The report quotes historian Jorge Orlando Melo as stating: “Thus emerged the first image in the history of contemporary Colombia of the ‘enemy’ associated with the black or indigenous ‘rebel’ who did not commit himself to a violently imposed ‘ ‘Enemy’ held authority and is therefore ultimately identified as the culprit of the violence inflicted on him”.

The explanation may sound far-fetched, but in some of the victim testimonies interviewed by the Truth Commission, the violence of the last sixty years seems to echo a racist and colonial cultural system. One of the testimonies in this culture chapter is that of an Afro-Colombian woman from the Colombian Caribbean who was tortured by a group of paramilitaries when she was branded with a hot iron.

“I have it here, I’ve never been able to forget it,” she says. “I think they did this to me because I was black, I think he tagged me because I was black and he tagged me like I was a slave. In the slavery era, black women shaped me, just as self-defense groups shaped me.” Slavery was abolished in post-independence Colombia in 1851, but not “the idea that bodies could be marked, outraged, and harmed.”

The truth report is not a legal document convicting anyone, not the gunmen, not their allies, not even the apathetic Colombians. It’s more of a cultural object trying to look like a mirror at the narratives that have defeated empathy for six decades or more. A book that seeks a new way of telling what was an enemy within. As communications professor Germán Rey said, efforts like the commission’s “have already begun to create cultural avenues for representing truth.”

The Truth Commission’s call for empathy comes a day before President-elect Gustavo Petro meets his biggest political enemy, former President Álvaro Uribe. For many close to Uribismo, Petro has always been a guerrilla fighter. For many close to Petrismo, Uribe has always been an ally of paramilitarism. And while it’s not yet clear what will become of this meeting of political rivals, sitting around the table may be another step in watering down the specter of the enemy within.

- Advertisement -
Share
Facebook
Twitter
Pinterest
WhatsApp
Previous articleApple Watch 6 in the offer check: the best smartwatch for only 255 euros on eBay
Next articleDíaz demands that employers “take their responsibilities” because “payrolls must not withstand the crisis”