The success of the Dubai Junior Regatta Modern Dhow Dhow 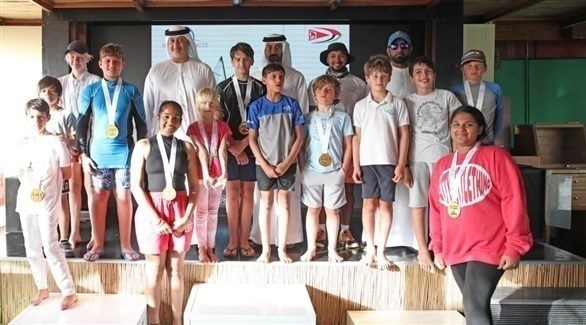 The Dubai Junior Regatta Sailing Race, which was organized by the Dubai International Marine Club as part of the 2021-2022 marine sports season, achieved great technical and organizational success with the participation of a group of future champions of the sport.

The regatta was held the day before yesterday -Sunday- on the beaches of Jumeirah in a renewed form of cooperation between the Dubai International Marine Club and the Dubai Beach Boat Club – DUSC – which hosted the event and welcomed the participants under the umbrella of UAE Sail Rowing Federation, where the participants competed for the titles of two categories, the first is the Laser 4.7 boats under 17 years old, and the second is the Optimist boats under 14 years old.

The competitions, which took place over five stages, revealed emerging talents from the sons and daughters of the resident communities in the United Arab Emirates, who were eager to take on the challenge, which took place in an atmosphere full of excitement and suspense, according to the highest standards of safety, protection and regulatory controls provided by the supervising technical committee of the race.

He continued the competitions and crowned the winners and winners Mohammed Abdullah Hareb, Board Member of the Emirates Sailing and Rowing Federation, Executive Director of the Dubai International Marine Sports Club, Mohammed Al Kamda, Board Member of the Dubai Beach Boat Club – DOSC, Yousef Al Bastaki, Director of the Sailing Department of the Dubai International Marine Club, and Ahmed Al Suwaidi, Chairman of the Committee of Governors.

The two German brothers of Yemeni origin, Noah and Yaqoub Al Hammadi, who got the first and second place, respectively, shone in the Laser 4.7 Sub 17 competitions, while the British Ryan Campbell was third and in the Ngourli girls, the sisters Kaur and Nimrett Rao managed to get first and second place.

The Optimist U14 competition saw heated competition between the entrants as the competition resulted in a British dominance of the top places, with William Burgess winning first place, Dominic Lisset second and Wash Fish third.

The Dubai Junior Regatta Modern Sailing Championships, organized by the Dubai International Marine Club, is one of the oldest and oldest modern sailing races, first launched in 2000 after the club announced the first modern sailing school in 1999, when it attracted a group of lovers of this sport.

The march of the event continued in the past seasons in an updated way to serve an important segment of lovers of marine sports, since young people, puppies and youngsters gathered at the race, the day before yesterday, a number of young men and women 7 countries represented: Great Britain, Germany, Austria, Turkey, Poland, Australia and India.