The strike of carriers in Spain affects the food sector 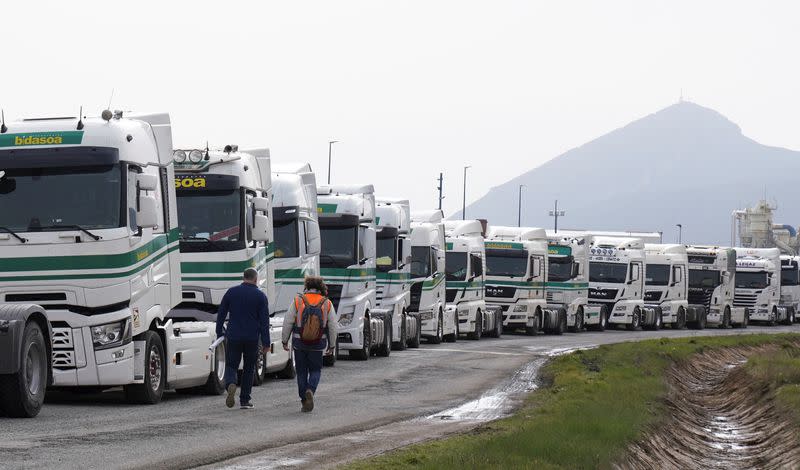 MADRID, March 17 (Reuters) – A transporters’ strike to demand better working conditions has caused disruption in some supermarkets and certain economic sectors in Spain, with dairy food producers complaining on Thursday of possible shortage problems as they receive less milk.

Carriers and owners of small trucks, grouped in the Platform for the Defense of the Transport Sector, began a strike on Monday in which they demand lower taxes and lighter regulations to improve a situation they describe as “total bankruptcy” .

“Diesel is the straw that breaks the camel’s back,” José Hernández, a platform representative and truck driver who lost his job on March 7. His company stopped operating because the fees it charged did not cover the costs.

Rising energy costs, compounded by the Russian invasion of Ukraine, have pushed prices up across the board, threatening to slow post-pandemic economic recovery and sparking social unrest in many countries.

The Spanish Federation of Food and Drink Industries (FIAB) urged the Government to act against roadblocks in some industrial areas of Spain, which have partially compromised the supply of feed to farms and packaging materials to factories, as well like the flow of some fresh produce to supermarkets.

Some of the pickets have adopted violent attitudes.

Mauricio García de Quevedo, head of the FIAB, declared that a violent minority cannot be allowed to appropriate the rights of a majority that wants to work.

The Spanish Minister of Transport, Raquel Sánchez, described the protest as a “boycott encouraged by the extreme right”, a link that Hernández denied, describing the platform as non-partisan. The Spanish Ministry of the Interior has reinforced security on the country’s roads with 23,600 police officers to guarantee supplies.

The Spanish government had reached an agreement with the main unions in the country’s transport sector to avoid a three-day strike at the end of 2021.