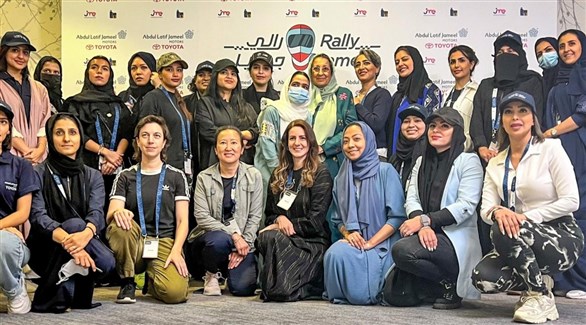 The Jameel Rally for Ladies, which is the first women’s off-road sailing rally, and the only one of its kind in the Kingdom and the Gulf Cooperation Council countries, kicked off today, Wednesday, in the northern city of Hail. from Saudi Arabia. .

Participating in the rally are 34 teams from 15 countries, including the United States of America, Sweden, Spain and Egypt.

The rally started from the historic Al-Qashla Palace, which is overseen by the Saudi Federation of Automobiles and Motorcycles, and supported by the International Automobile Federation through the Women in Motorsports Committee, newspapers reported on Wednesday. Saudis.

The Jameel Rally is an exceptional and historic motorsport event in the Arabian Gulf, which focuses more on the adoption of navigation skills to cross the track that will cover a daily distance of 300 to 500 kilometers, starting from the city of Hail, then the city of Qassim and ending in the capital, Riyadh, passing through the Qassim region.

It is worth noting that since the announcement of the entry for the rally, the competition has seen a high demand from women wishing to participate.

The countries of the Gulf Cooperation Council are strongly participating in this sailing rally, with the presence of several teams from the United Arab Emirates and the Sultanate of Oman, and for most of the participants it is the first time that they are able to drive in the Kingdom, and this comes after King Salman bin Abdulaziz issued an order to allow the issuance of women’s driving licenses in the Kingdom on September 26, 2017, to allow women to drive on public roads the following summer .

And it’s not just limited to participants from Saudi Arabia and the Gulf, as many teams will be coming to the Kingdom from far flung regions around the world, with three teams from the United States of America registering.

In addition, the European continent will also be well represented with the arrival of a team from Sweden and another from Spain. As for the Arab countries, there is a team from Egypt preparing to compete on the bumpy roads between Hail and Riyadh.

Of note, the rally is open to all female competitors from Saudi Arabia or any other country who are 18 years of age or older and have a license that allows them to drive in the Kingdom.

- Advertisement -
Share
Facebook
Twitter
Pinterest
WhatsApp
Previous article“We can’t join NATO,” Zelensky admits to the US Congress.
Next article“The corpse of the Egyptian goalkeeper of Al-Ahly” scores a fatal goal. Qur’anic verses testify to the emergence of his talent