The six-part Negev Summit. Meanings and consequences of an “unprecedented event” 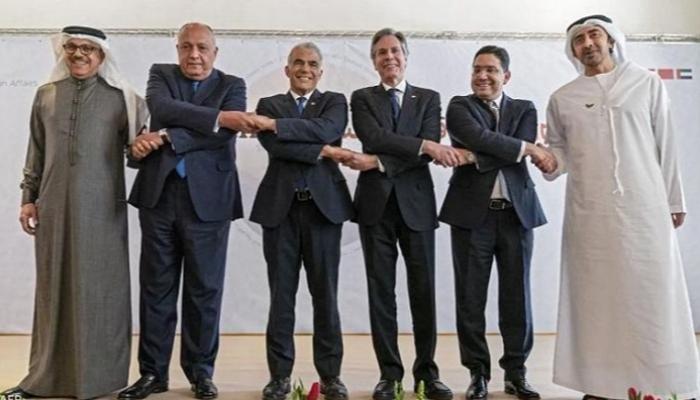 The Negev Summit concluded in Israel, with the participation of the foreign ministers of America, the United Arab Emirates, Bahrain, Morocco and Egypt, emphasizing the rejection of terrorism and support for peace.

A ministerial summit described by Arab political experts and analysts as an “unprecedented event” due to the nature of the participating parties that had previously signed peace agreements with Israel, and also the expected results.

In separate interviews, the experts told “Al-Ain Al-Akhbar” that the summit, to be held annually, will seek to form an Arab-Israeli regional axis against terrorism and threats to the region.

At the same time, they noted that the summit is expected to result in “a gradual change in the ‘geopolitical landscape’ in the Middle East.

But they also saw that it is too early to talk about the formation of the so-called “Arab NATO” to deal with Iranian threats, even with the annual Negev Summit being held annually.

Dr. Tarek Fahmy, an Egyptian academic and political pundit, described the Negev summit as an “unprecedented event,” explaining in an exclusive interview with Al-Ain News that the inaugural summit is an Arab-Israeli approach that seeks overcome the past. differences to a new stage in the life of the current regional system.

Just as the event was, the results were also different, according to Fahmy, who said that “the summit will result in an attempt to form an Arab-Israeli regional axis, with the aim of confronting the threats and dangers to which the region is exposed. . especially the Iranian threat and its affiliates in the region, and terrorism.”

According to the Egyptian academic, the matter does not end there, but can extend to a “gradual change in the “geopolitical landscape” of the Middle East, through multiple visions and approaches, not in a single direction.

Despite the formation of an Arab-Israeli front to deal with the threats, Fahmy realized that it is too early to talk about a new proposal for an “Arab NATO”, even as the summit is turning into a session. semi-regular about an annually.

Three years ago, the administration of US President Donald Trump sought to lay the groundwork for the formation of a “strategic alliance in the Middle East” (Arab NATO), similar to the North Atlantic Treaty Organization, with the aim of “confront” Tehran’s policies.

In early 2019, US Secretary of State Mike Pompeo toured several Arab countries in an effort to bring together potential members of this alliance, which Washington subsequently failed to do.

Signs of the American movement

Fahmy also saw that the Negev Summit gave Israel a regional presence; However, the issue remains linked to Arab-Arab coordination on the Palestinian issue, given Tel Aviv’s reluctance to enter the peace or settlement process, and giving priority to Iran.

The American participation in the Captains’ Summit carried many messages and indications, including that “the United States is sending a message that it seeks to build cohesive Arab-American alliances in the region, amid its fears of Arab expansion into the other Russian camp, especially after the contacts that Arab leaders made with Moscow recently.”

The summit will be held on the 43rd anniversary of the peace between Egypt and Israel, in a meaningful message -according to Fahmy- where Washington wants to send a message that it is the one who sponsored the peace, and will continue to support it, despite not presenting any news about the Palestinian question, or proposing a vision and approach for the resolution of the Israeli Arab conflict.

Catching the ropes of crises

For his part, Abdullah Al-Junaid, a Bahraini political writer and researcher, attributed the importance of the strong US participation in the Negev summit to the fact that Washington is trying to recover its traditional role, but through a policy of holding the threads of crises. . not solve crises.

In an interview with Al-Ain News, Al-Junaid said that the US Secretary of State’s participation in the summit “reflects Washington’s concern for regional liberation in formation and decision-making, and circumventing consultation or information mechanisms.” , as was followed in the historical relations between Washington and the countries of the region”.

The Bahraini researcher warned that countries in the region must realize that their critical files, from restoring stability to containing Iran, require a realism that goes beyond the principles that govern US policy.

In another aspect, Dr. Nabil Mikhail, a professor of political science at George Washington University, called on the United States to deal with the details of the nuclear deal with Iran with full transparency, and to provide full information to the Arab side about the deal. , especially when Washington is criticized for withholding information about Tehran to complete the nuclear deal.

On the goals of the “Negev Summit” with the participation of the foreign ministers of 6 countries, Mikhail told Al-Ain News: “The summit emphasized the need for cooperation between the 6 countries to achieve stability in the region. and support economic cooperation in order to overcome the repercussions of the Russo-Ukrainian war, in addition to the consequences of the effects of the Corona epidemic.

He also stressed that the United States seeks to calm the situation in the Middle East and not cause sudden unrest in the region, according to Mikhail.

The final declaration of the Negev Summit emphasized the formation of security committees to deal with Iran’s threats in the region and a security network for early warning, noting that the summit would be held periodically.

In a joint press conference between the six ministers, Israeli Foreign Minister Yair Lapid said that the meeting in the Negev would not be the last and called on everyone to participate, including the Palestinians.

Lapid added: “Last night, we decided to make the Negev summit a permanent forum, and in cooperation with our closest friend, the United States, we opened the door today to all the peoples of the region, including the Palestinians.”

The Israeli minister described the meeting as “making history,” referring to building a new regional architecture based on progress, technology, religious tolerance, security and intelligence cooperation.

Egyptian Foreign Minister Sameh Shoukry said that the “Negev Summit” is related to the strengthening of the peace process in our region and our participation in promoting peace and promoting the continuation of peace efforts. peace.

He added, in press releases this afternoon, Monday, that the resumption of negotiations between the Palestinians and Israel had a great place in the Negev Summit discussions, and our participation in the Summit came to consolidate peace, present our point of view and boost the continuation. of peace efforts.