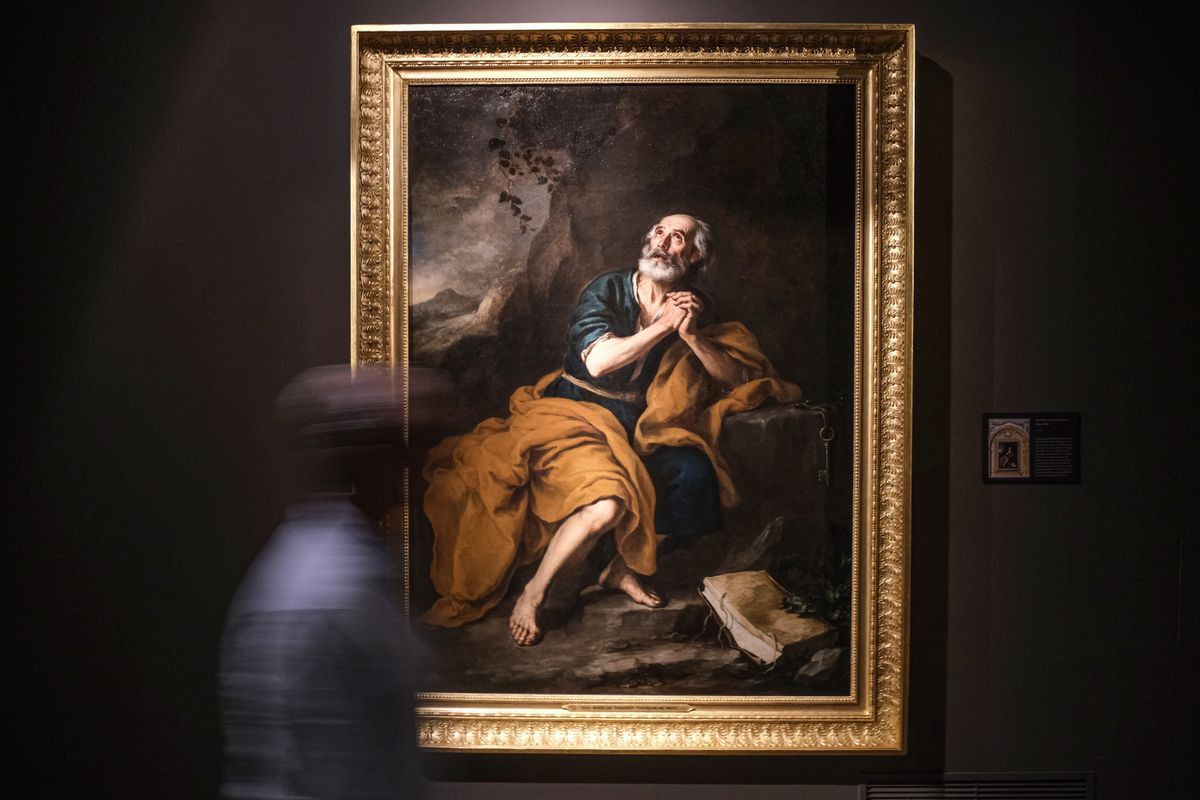 Bartolomé Esteban Murillo painted the painting in 1675 Penitent Saint Peter Commissioned by his friend, Canon Justino de Neve, to be displayed at the Hospital de los Venerables in Seville. And there it remained until, in 1810, it was part of the great sack carried out by Marshal Soult in the service of Napoleon during the War of Independence in the city of Seville. Then the trace of one of the Sevillian artist’s most unique works was lost, until two centuries later, thanks to painstaking detective work, it was found in the home of an Iranian collector on the Isle of Man.

In its greatest commercial heyday, the renewable energy giant Abengoa acquired the painting in 2014 for six million euros because – as another example of its commitment to the city of Seville – it returned the canvas to the place of its creation: the Hospital de los Venerables, the also the seat of the is Focus Foundation, which the company launched in 1991 to mark its 50th anniversary. Eight years later, the deep crisis that the company, which has just been dissolved, is going through could lead to a renewed eviction from the painting if the bankruptcy judge decides to put it up for auction and it ends up in the hands of a collector from outside Seville.

“This isn’t just any Murillo work, it’s exceptional and should stay in Seville,” says Benito Navarrete, expert on the Sevillian painter’s work and president of the Andalusian Ministry of Culture’s movable property commission. He advocates that the central government acquire the canvas to guarantee it stays in the city. The Seville City Council has also launched an offensive to ensure that the work that took so much to return to its place of origin does not leave Seville’s cultural heritage again.

The uncertainty surrounding Abengoa has transferred to the fate of the only painting it owns. As in the case of Saint Peterthe company acquired in 2007 the Saint Rufina by Diego de Velázquez (for 12.47 million euros), a milestone for the Focus Foundation, and in 2009 it completed the purchase of the first Immaculate Conception painted by Velázquez Saint Catherine of Alexandria (1650) which Murillo created for the church of the same name in Seville and which was also part of Soult’s sacks. But unlike San Pedro, in pursuit of its social responsibilities, Abengoa has ceded the rest of the other cadres to the Focus Foundation, which due to its legal independence is safe from the ultimate fate of the company.

That murillo However, Abengoa is one of the assets included in the bankruptcy that the parent company has been immersed in since February 2021 and entered the liquidation phase on July 1. To avoid a future auction, which would attract foreign collectors, the Junta de Andalucía registered the work in the General Catalog of Andalusian Historical Heritage as a Property of Cultural Interest (BIC) so that it could not leave Spain. Something he did with that too Saint Catherinethe other murillo owned by the Focus Foundation. When the Ministry learned that this institution wanted to sell this painting, it exercised its right of first refusal and bought it for 1,089,000 euros.

“The board has already given assurances that one of the Murillos remains in Seville, now it is up to the government to show their commitment,” says Navarrete. Culture Minister Miquel Iceta, during his last visit to Seville last May, advocated his department taking over the canvas to ensure “the legacy is not scattered”. The condition is that the painting comes onto the market first.

“The table is irrelevant for Abengoa”

This circumstance can occur if, in the case of Abengoa’s liquidation, the competition judge decides to auction the piece or if an interested party makes an offer to the insolvency administrator or to Abengoa beforehand. “Then they should notify the judge and he could set a deadline for the competing sale to submit other offers, in which case a sub-chip would be made among the bidders,” explains José Sánchez, a member of the Professional Association of Bankruptcy Practitioners. “The painting can be put up for sale at any time because it’s not a necessary asset for the company’s operations,” he says.

Clemente Fernández, who until last Friday was president of Abengoa SA, owner of the Murillo, told this newspaper that the Saint Peter It is currently estimated at around eight million euros. “But if it’s cataloged as BIC and it can’t leave Spain, its price goes down in an auction, the buyer knows it, they’ll bid less and there will be less competition,” he explains. Fernández calculates that it could be sold for five million euros.

Consuelo Durán, director of Durán Art and Auctions confirms that the BIC status of the artworks “limits the time of the bid”. It claims that the eight million in which the President of Abengoa sets the value Saint Peter “They are not unreasonable given Murillo’s importance in the art world,” but he stresses that he cannot give a final assessment without knowing the condition and quality of the canvas. Maria Garcia, delegates of Christies in Spain he agrees with Durán, adding that “the fact that the owner company is in a precarious financial situation need not affect the final price obtained in the offer”.

A circumstance that does not seem to worry the owner either. “The table is irrelevant, it won’t solve the company’s problems,” he says. An irrelevance that of course neither the city council nor art lovers share, who would consider it a catastrophe if the ruins of Abengoa once again deprived the city of the work of one of its reference painters.

The board does not plan to repeat the operation they performed on the Saint Catherine, maintain sources close to the Ministry of Culture, who emphasize that the decision to purchase the Murillo was made when it became known that there were interested collectors and there was a risk that he would leave the community. Sources close to the Abengoa bankruptcy trustee say no one has ever transferred their shares in the San Pedro to them. Now you have to complete the asset liquidation plan incl murillo.

- Advertisement -
Share
Facebook
Twitter
Pinterest
WhatsApp
Previous articleApple Watch 3 at Lidl: Too old, too expensive – prefer this smartwatch
Next articleThe President of Abengoa subordinates the rescue to private means: “It is the fastest way and without the consent of Brussels”