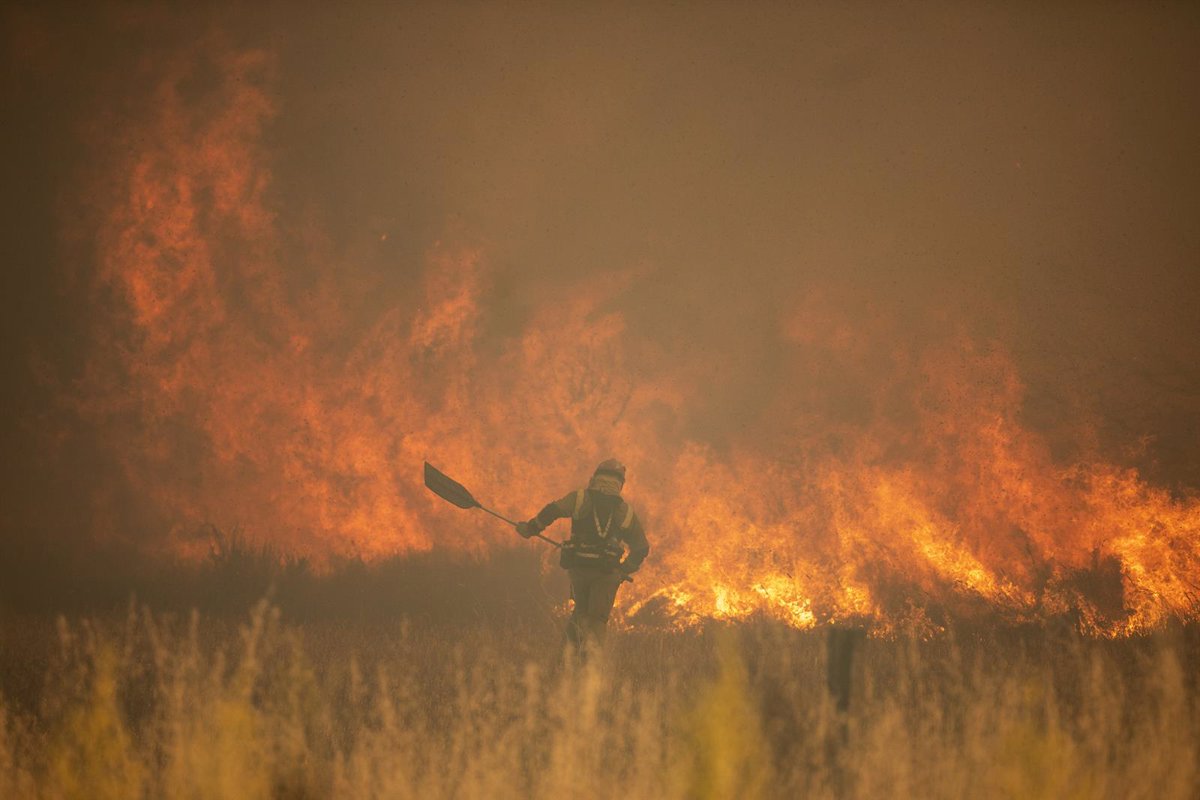 It surpasses that of Navalacruz (Ávila) last year in the affected area, which was the worst in community history so far

The fire that broke out in the Sierra de la Culebra on Wednesday evening continues to unleash and has already spread to the Tera Valley this Saturday, where it has forced the evacuation of several towns due to the threat of flames.

The strong gusts of wind and the heat hampered the extinguishing work carried out throughout the day by more than 500 professionals from different autonomous communities.

In the morning, the Junta de Castilla y León announced that almost 20,000 hectares of land had already burned, a large part of which belongs to the Sierra de la Culebra Nature Reserve, home par excellence of the Iberian wolf in north-west Spain and one of the natural spaces of greater value in the province of Zamora.

According to the committee’s latest data, that figure would have risen to 25,000 hectares in the past few hours, surpassing last year’s Navalacruz (Ávila) fire, which was the worst in the community’s history so far.

Also in the early hours of the morning, it was confirmed that residents of the towns of Boya, San Pedro de las Herrerías, Cabañas de Aliste, Mahíde, Pobladura de Aliste, Las Torres de Aliste and Palazuelo de las Cuevas could return home after a week of nightly evacuation, where they spent the night in a facility in Alcañices, their county seat.

On the other hand, residents of other cities such as Villardeciervos, Villanueva de Valrojo, Ferreras de Arriba, Ferreras de Abajo, Codesal, Cional and Flechas have been evacuated since Friday because of the risk of fire and smoke in their places. To these places, other places such as Otero de Bodas, Olleros de Tera, Pumarejo de Tera and Calzadilla de Tera were added on Saturday, badly affected by the flames’ advance northward.

In the case of Otero de Bodas, the fire-fighting services had to work hard to prevent the fire from reaching the houses after the flames jumped the N-631 road at the height of the Val de Santamaría while they were in the localities del Tera , the fire also seriously threatened houses in the afternoon.

The resources that have been working in the area all day are: 29 environmental agents, 18 technicians, 40 fire trucks, 9 bulldozers, 36 ELIF ground and helicopter crews, 20 helicopters, 1 Infocal coordination aircraft, 1 coordination aircraft and 2 amphibious aircraft from the ministry for the Transition and Demographic Challenge and the Advanced Command Post (PMA).

PROBLEMS WITH THE TRAINS

In addition, after passing the N-631, the advance of the flames reached the AVE line, forcing Renfe to interrupt traffic and propose the return of certain trains to their starting point, given the difficulty of offering a road alternative.

Despite this fact, government sub-delegation sources have confirmed to Europa Press that there are currently no considerations for declaring wildfires at level 3 alert, so the fire in the Sierra de la Culebra will remain at level 2.