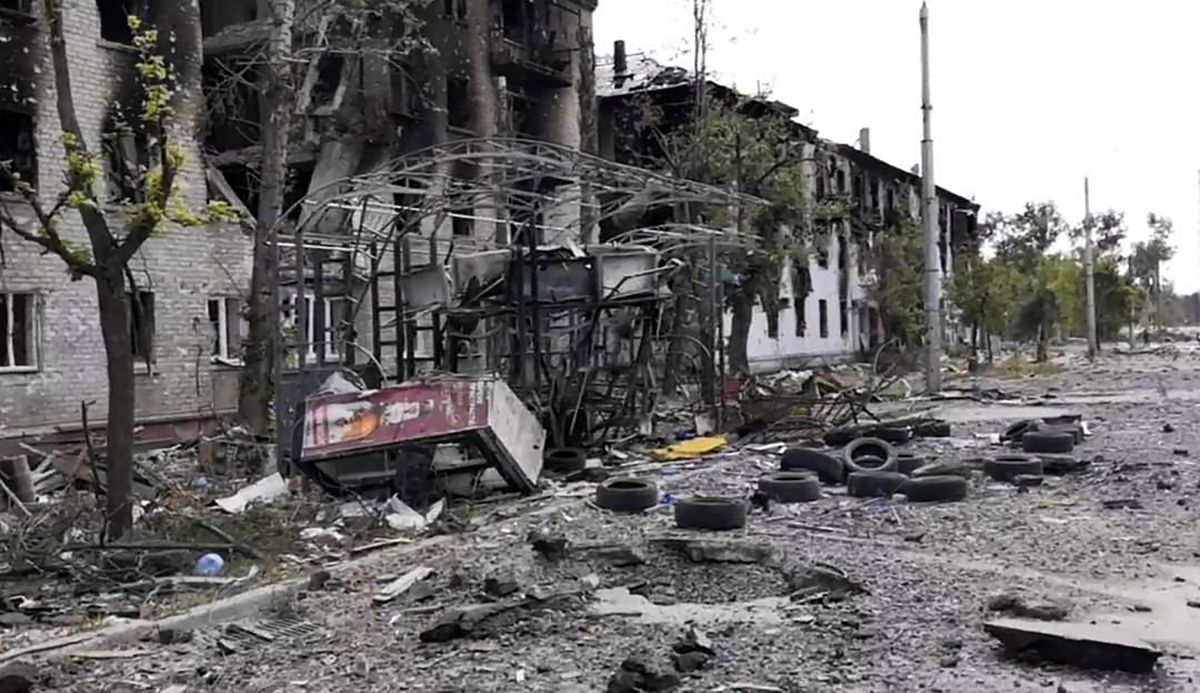 With a brief statement and without the rhetoric of past victories, the Russian army claims to have finally achieved one of its two supposed territorial goals in Ukraine: the capture of the Lugansk province. After 130 days of fighting, Russian Defense Minister Sergei Shoigú told Vladimir Putin on Sunday that the city of Lisichansk, the last Kyiv-controlled city of significance in the region, had fallen into his hands, according to the Russian military department.

Despite the fact that Russia assures that it controls the city in its entirety, Ukraine’s defense ministry replies that parts are still in the hands of the Kiev armed forces. The spokesman for the ministry told the BBC that the situation in Lisichansk had been “very intense” for a long time and that Russian troops were “attacking without a break”.

Also, just an hour before Shoigu’s announcement, Russian Defense Ministry spokesman Igor Konashenkov said in his usual press conference that the battle for the city continues. “Russian troops and units of the Lugansk People’s Republic are fighting in Lisichansk, thereby completing the defeat of an encircled enemy,” said the army representative on this front.

On the other hand, the spokesman for Ukraine’s Defense Ministry added that while Russia is finally taking over the entire Lugansk province, the battle for Donbass region is “not over yet” as other cities of Donetsk province are still in Ukrainian hands. The controversy is reminiscent of that which took place weeks ago in Severodonestk, a city the Russians have taken a long time to control since they said they had already achieved their goal.

On February 21, three days before the start of his offensive, Vladimir Putin signed two decrees recognizing the two self-proclaimed republics of Lugansk and Donetsk as independent states, something not even other close Moscow allies like Kazakhstan have done. The Russian president later clarified that his borders would match those drawn by the separatists in two illegal referenda in May 2014. This included the territory that the Ukrainian government was able to keep after the war until 2015.

Oleksii Arestovich, adviser to the President of Ukraine, has admitted that Russian troops have crossed the Donets River and are approaching Lisichansk from the north. “It’s a threat. I’m not ruling out an outcome. In a day or two things will be much clearer,” said Arestovich, who believes it’s for the Kremlin, which focuses on defending six major cities in the Donbass region concentrate will be complicated even if the Russians take Lisichansk.

Ukrainian military expert Mikhailo Samus plays down the taking of Lisichansk. “Right from the start of the war, Putin said he had liberated the entire Lugansk province. But it took four months to complete the operation,” he says in a phone conversation. Samus goes on to argue that from a global perspective, the key in the war over Ukraine now is to liberate southern cities like Kherson and Melitopol from Russian hands. And the fact that all Russian forces are focused on the battle in the east gives the Kiev troops more chances to advance south.

Samus believes that the Russian strategy of attacking civilian targets without military interest – as happened on Monday in a shopping center in Kremenchuk in the center of the country or on Friday in an apartment building on the outskirts of Odessa – corresponds to the will of the Kremlin to reduce the psychological pressure on increase the Ukrainian population and lower their morale. “Of course, for us, losing human lives is a tragedy, but Putin only wants us to be demoralized, and more and more Ukrainians think that we are facing too powerful an enemy and that it would be better to surrender,” he concludes.

That think tank The US Institute for War Research (ISW) reported on Saturday that geolocation images showed that Russian forces had encountered no resistance when they entered Lisichansk. On June 24, the Ukrainian army announced its withdrawal from Severodonestk. Even then it was clear that the next target of the Moscow forces would be Lisichansk, the sister city of Severdonetsk on the other side of the Donets River. The ISW added that Russian troops are likely to take over the entire Luhansk province in the coming days. If they are successful, the next target will be Siversk, a city in the neighboring Donetsk province.

The ISW also explains Ukraine’s withdrawal as an attempt to reduce the risk of Kyiv’s forces being encircled by the enemy. And thus be able to continue the retreat to fight future battles around the cities of Sloviansk and Baymut, both in Donetsk province.

Putin admits his concern for his own victims

The Kremlin has claimed to have different objectives in Ukraine during these four months of fighting. Putin announced on February 24 that his troops would invade Ukraine from three fronts, including Belarus, with the goal of “demilitarizing and denazifying” the country. Later, after he stopped fighting around Kyiv in March, he reiterated that it was a “special military operation in defense of the Donetsk and Lugansk People’s Republics.”

Leonid Pashenchik, leader of the Lugansk secessionists, welcomed the Russian advance. “Ukrainian neo-Nazis who came to our country to kill and steal were defeated!” he said, in his usual rhetoric about a territory that Russia has recognized as Ukrainian for more than three decades.

On June 29, Putin conceded that his troops’ advance in the east was being more cautious to avoid a higher casualty toll. “You shouldn’t talk about deadlines, that’s life. They are real things. It is wrong to stick to some deadlines, it is due to the intensity of the hostilities, and the intensity is directly related to the possible losses,” said the president, stressing that “everything is going according to plan” because the Russian forces continue to advance.

In those four tragic months, Russia’s Defense Ministry has only twice announced an official death toll, most recently on March 25, when it claimed to have recorded 1,351 dead and 3,825 wounded among its troops. However, figures estimated by the Ukrainian government and NATO countries have increased these figures many times over.

The conflict also reached the Russian border region of Belgorod on Sunday, where governor Viacheslav Gladkov reported that at least four civilians died on Saturday night when fragments of a Tochka-U missile fell on the capital. As the spokesman for the Russian Defense Ministry later explained, its anti-aircraft systems hit a total of three missiles and several drones.

The Lugansk region was the front from which Russia started with the greatest advantage due to its previous separatist control of the area. However, the battle for Donetsk dares to be more complicated. His forces have captured Severodonetsk but have not yet reached the city of Sloviansk, where Russian militias started the war eight years ago.