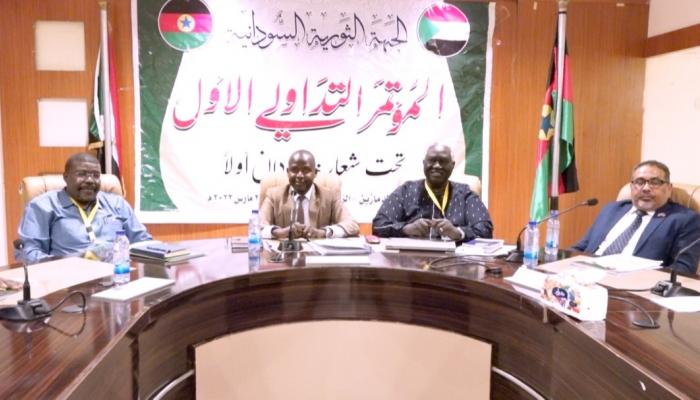 The Sudanese Revolutionary Front coalition raised, this Saturday, an initiative to solve the serious political crisis that the country has been experiencing for months.

The initiative was part of the results of the “first deliberative conference” held by the Revolutionary Front a few days ago and is still ongoing in the city of Roseires in Blue Nile state, with the participation of members of the Transitional Sovereignty Council.

Revolutionary Front spokesman Osama Saeed said: “The morning session of the conference on Saturday was devoted to finalizing the coalition’s initiative to resolve the current Sudanese crisis as the discussion was completed.”

He pointed out that “what distinguishes the Revolutionary Front initiative is that it subjected the current situation to an in-depth study through its governance experience, and diagnosed the current crisis in the country as a comprehensive national crisis.”

Saeed added: “The initiative is integrated, accompanied by a roadmap and schedule matrix for implementation.”

He stressed that “the Revolutionary Front is in the process of presenting its initiative to all political forces and actors on the country’s political scene, especially to the partners of the transition period stipulated in the constitutional document, as a partner and authentic member of the political equation. not a mediator.

And the Revolutionary Front spokesman added: “The main objective of presenting the initiative is to preserve the security and stability of Sudan by addressing its problems through a comprehensive dialogue that excludes no one.”

The Revolutionary Front is an alliance of some 7 armed and civilian factions, all of which returned to Khartoum after years of war under an agreement with the Sudanese government signed in Juba on October 3, 2020, according to which they were participating in the transition authority.

Following the decisions of the commander of the Sudanese army, Lieutenant General Abdel Fattah Al-Burhan, issued on October 25, which dissolved the government and imposed a state of emergency in the country, employees of the Revolutionary Front led by Al-Hadi Idris maintained their positions in the transitional authority, in application of the Juba Agreement.

Malik Agar, Al-Taher Hajar and Al-Hadi Idris, members of the Sovereignty Council, participated in the deliberative conference of the Revolutionary Front in Roseires, while Mona Arko Minawi and Jibril Ibrahim were notably absent.