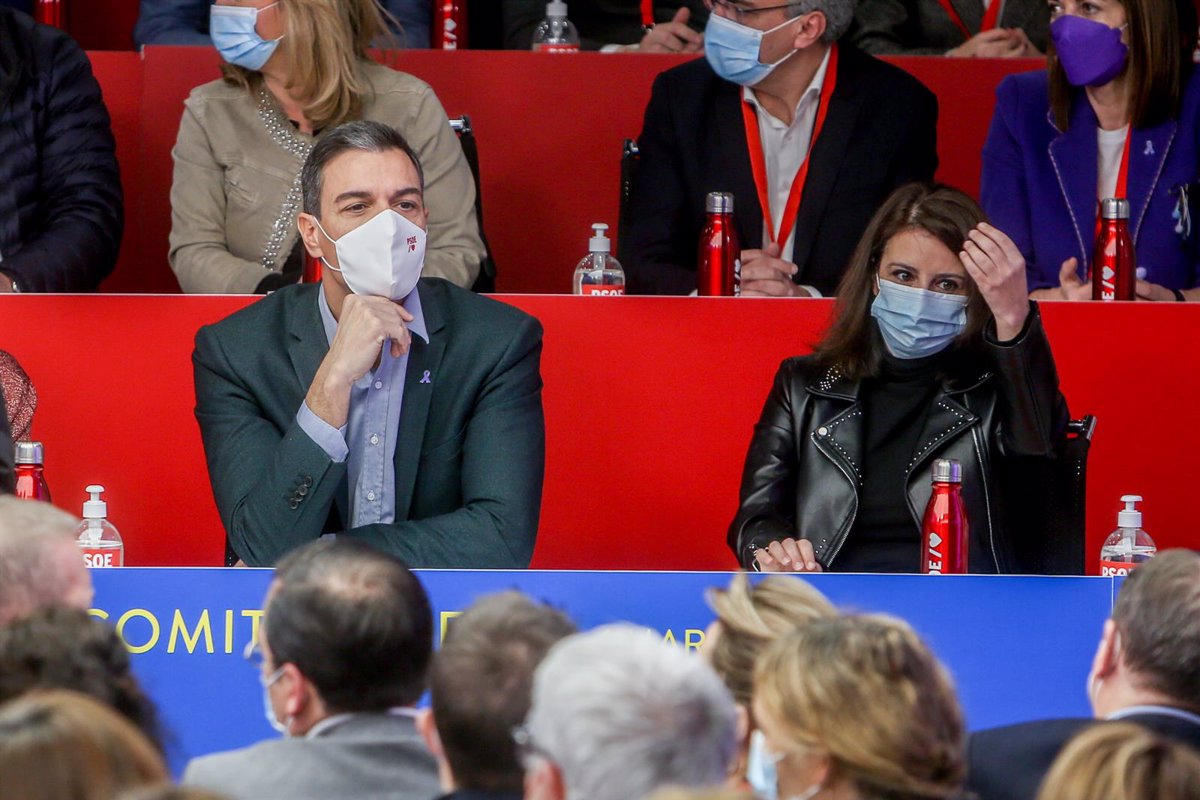 He will make official the appointment of Montero, Alegría and Patxi López, as well as the continuity of Santos Cerdán after the departure of Lastra Sicilia and Gómez

The PSOE is holding an urgent and extraordinary federal committee this Saturday to ratify the new appointments in the socialist leadership, conducted by Secretary General Pedro Sánchez, who has placed several ministers in relevant positions in the executive to give them a boost in the face of the party of the new election cycle and manage to come back against the PP.

Sánchez has appointed Minister of Finance and Public Functions María Jesús Montero as the party’s “number two” to replace Adriana Lastra, head of education and training Pilar Alegría, as spokeswoman for the federal executive branch that has previously occupied Philip Sicily . In addition, MP and former lehendakari, Patxi López, will become the new parliamentary speaker in the Chamber of Deputies, a position previously held by Canarian MP Héctor Gómez.

In this way, Sánchez corrects part of the changes he made in the party less than a year ago and ratified at the 40th PSOE Congress in Valencia in mid-October. There he appointed Sicilia, who has only been in office for nine months, as spokesman for the executive. The same is happening with Héctor Gómez, elected by Sánchez on September 1, 2021 – at the beginning of the political course – and leaving the leadership less than a year later.

The names of those chosen for the party leadership were known this Thursday, although the change in the socialist leadership was sparked after the resignation last Monday of PSOE Deputy Secretary General Adriana Lastra, citing personal reasons and a prolonged sick leave get off the load.

With these changes in the direction of the PSOE, Sánchez deploys several trusted collaborators in Ferraz who have already been part of the government and form a hard core to ensure that the actions and message of the executive and the party follow the same line and, if possible, one after the other are matched.

In this way, Sánchez continues to empower profiles that in the recent past belonged to other sectors of the PSOE. Alegría was the spokeswoman for Susana Díaz in the 2017 primary, which Sánchez eventually won against all odds and with the party apparatus against her.

After the reorganization, the Minister of Education will have the autonomy to exercise the function of spokesman and also to direct the communications of the party, although in the previous phase this last assignment was the responsibility of the Deputy Secretary General, according to the regulations came out of the 40th Congress.

For his part, Patxi López was an associate of Sánchez until he was forced to resign in 2016, although a few months later he distanced himself from him and they faced each other in the aforementioned primaries, where he finished third behind the current president of the government and Susana diaz.

Sánchez has also included the Minister of Culture and Sports, Miquel Iceta, in the Federal Executive Commission, who will be the new head of Democratic Memory and Laicism – replacing Patxi López – as well as the Mayor of Corvera (Asturias), Iván Fernández, as a Replacement by Juan Francisco Serrano, who joins organizing secretary Santos Cerdán’s team.

SANTOS CERDÁN CONTINUED IN THE ORGANIZATION

Cerdán, “number three” of the PSOE, is one of those who emerge strengthened from the changes, as he maintains the position after the internal tensions with Lastra due to the internal power quotas that various voices in the party warn about, one of the reasons that that brought about the changes.

According to the agenda, which was made available to Europa Press, the Federal Committee will make changes in the “structure” of the Federal Executive and the parliamentary groups, deal with the call for entries and the calendar of the primaries and the process of preparing the candidatures, and finally approve the bill for the Fiscal year 2021 and the budget 2022.

In the background is the need to give the party a boost in the face of the new political course and, after several socialist defeats in recent elections and the rise of the new in the polls, to dare to come back to the PP “popular” leader Alberto Nunez Feijoo. The next local and regional elections will take place next spring and only a few months later it will be the turn of the federal elections.

The PSOE was defeated in the Andalusian regional elections on June 19, where it suffered its worst historical result, dropping to 30 seats, while the PP achieved the first absolute majority in that community. In February he also lost in the elections in Castilla y León and a year earlier in Madrid, where he became the third political force.

In parallel, the PP changed leadership with the arrival of Alberto Núñez Feijóo as party leader last April, and since then the polls have seen continued growth in his favour. In fact, the last barometer conducted by the Center for Sociological Research (CIS) in July of this year placed the PP as the first force above the PSOE for the first time.

In that regard, Minister for the Presidency, Relations with the Courts and Democratic Memory Félix Bolaños said on Thursday that the replacements in the PSOE would help strengthen the party’s message in the face of the “deafening” noise coming from the right . “From September, all voices and all power will be there to communicate what we intend to do,” he said.

Similarly, Miquel Iceta, one of the climbers, was convinced that with the new additions, the PSOE would leave the Federal Committee with “more powerful leadership for local and general elections”.

The President of Asturias and leader of the PSOE in the Principality, Adrián Barbón, also spoke about it, stating that the committee will serve as “reflection and analysis”. In addition, he praised Patxi López, noting that “he is a man with an exemplary career, he fought against ETA, he was the lehendakari of peace and he has reached the end of arms,” ​​he added.